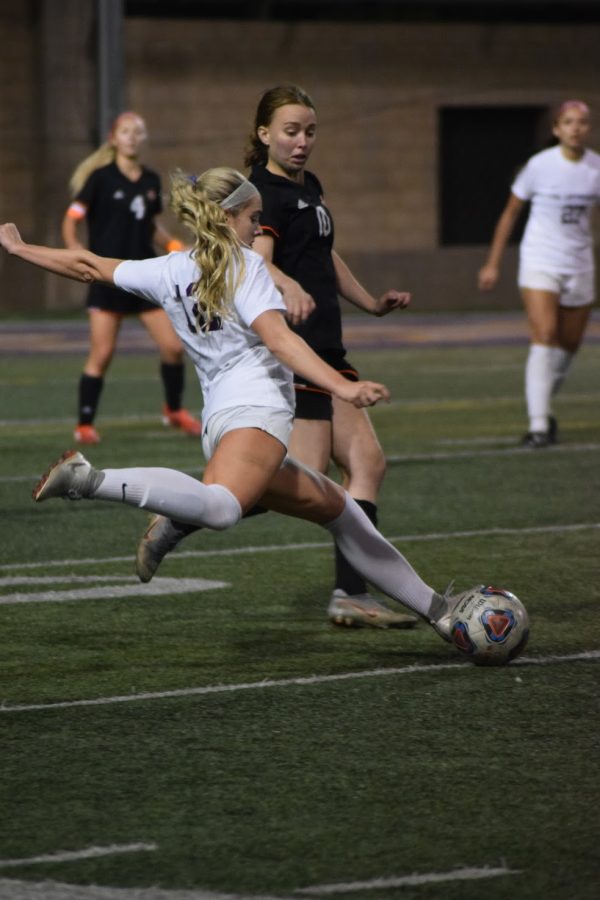 Senior midfielder Mackenzie Boulware looks to put the Regals on the board.

The California Lutheran University Regals soccer team ended their game in a tie against the Occidental Tigers on Oct. 14, 2021. The game ended with a score of 1-1, leaving the Regals with a conference record of 5-0-3.

Junior forward Mandy Crawford scored a goal for the Regals in the first half at the 35:08 mark. The next goal was made during the second half by Occidental’s senior midfielder Kyra Bethune at the 69:40 mark.

The game carried on into overtime as both teams tried to break the tie. The Regals made six shots on goal and Occidental made three shots on goal. The game ended after 110 minutes.

Senior midfielder Mackenzie Boulware had mixed feelings about ending in a tie.

“I think we are a very competitive team, so it doesn’t feel great to tie, especially when you’re at the top, but I think anything is better than a loss. So, not the best, but, I mean not the worse case scenario for sure,” Boulware said.

Senior midfielder Sonia Chan had a different outlook on the tie, expressing that ties bring the team closer.

Both Boulware and Chan remained positive that they were still undefeated in the season  in conference play.

“I think if we keep that up, and as long as we can continue to create the attacking chances and eventually get the ball in the goal, it’s going to be even easier to remain undefeated and keep the ball out of our net,” Boulware said.

“It feels good! After coming off a tie, it feels like it should be a win. It has some doubts, but I think that, again we didn’t lose any points, we are still undefeated, that’s still something to acknowledge. I think that’s something to recognize and I’m so very proud of us for being able to do that,” Chan said.

Boulware advised that the team’s attack is what needs to be improved before the next game.

“I think our defense is solid […]. We just need to work on that final ball, getting the ball back in the net. We are creating so many chances we just need to finish them,” Boulware said.

In the end, tie or not, Chan said she is proud of the team.

“In my four years of being here this is the best team I have ever been on. This is the most talented team and I think it holds a lot of weight to be a Regal. Not everyone can be a Regal and I think that the girls that are on this team pull that to a very high standard, and they honor it very much and we are not done with season. Even if we are undefeated we still have a few more games and I’m looking forward to it,” Chan said.