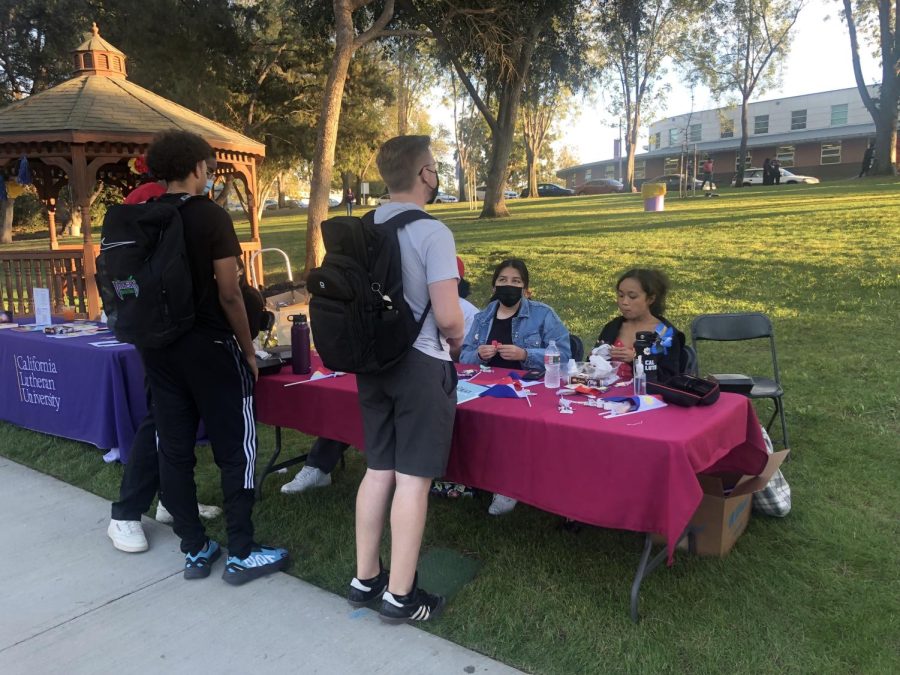 Students approach the cultural clubs present at the CCEI Block Party to play games and redeem their prizes.

President of FILO Terehna Soriano said the block party was used to provide a space where the Cal Lutheran community can gather and learn more about different cultures.

There were many cultural Filipino foods at the event, and flags decorated the park for the celebration. Several members belonging to the clubs in attendance said they were happy with the turn out at the vent.

“I wanted to learn more about the culture and everything with it, because I don’t know much about it and my roommate is Asian so I just want to get more familiar with it,” Arnold said.

Junior Diala Bdour said she had come after learning about the event through the Hub. Upon seeing the event being advertised, she thought to herself that it seemed like a cool event.

Bdour said she spent most of her time sitting at one of the tables set out in the park for people to socialize. Bdour also said she had made a new friend, who was sophomore Sophia Morin, after Morin joined Bdour at her table.

Morin said she learned about the event as she walked by Kingsmen Park while it was taking place. She said she didn’t arrive early enough for the games, but said she was still having fun.

“I will look into it to see if they have any more events coming up, because this one is really nice compared to other club events,” Morin said.

Soriano said she was very happy with the event, saying that despite the changes she would’ve made, it still was put together well overall.

Soriano said the event also held more weight, as she shared a bit of history.

“I’ve been wanting to do this event since my freshman year, and I’m a senior now, so I’m like, this is cool,” Soriano said.

Rachel Bennett, who is a CCEI graduate assistant and acted as coordinator of the event, said how great it was to work with these clubs and their members. She said she was really glad with how the event worked out.

“I’m happy that people have been showing up to our cultural events, since that’s really what our focus is at the CCEI,” Bennett said.