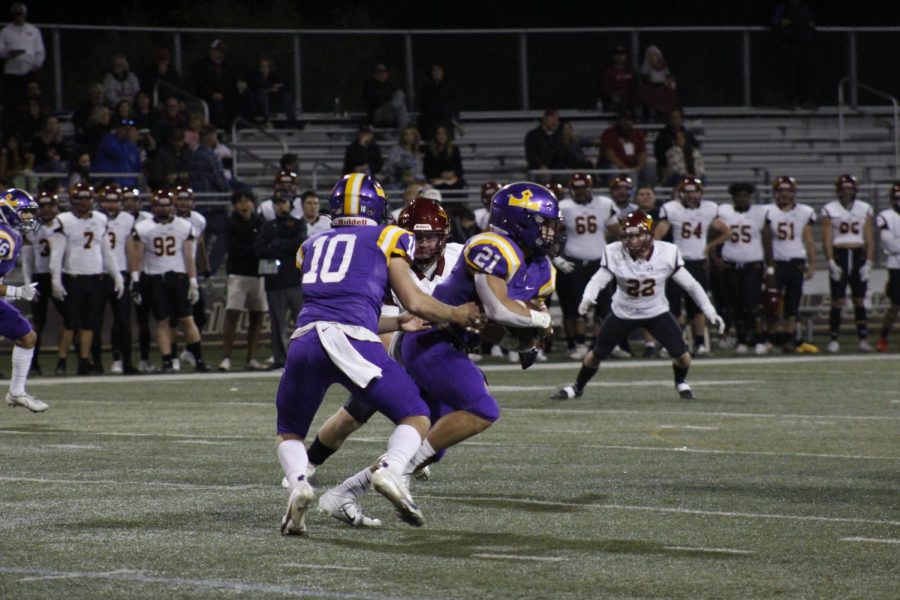 Quarterback Nick Lasher hands the ball of to Jackson Taylor as the Kingsmen look to score.

The California Lutheran University Kingsmen football team extended their losing streak to two games after a tough loss against the Claremont-Mudd-Scripps Stags, in a 27-0 game at William Rolland Stadium on Saturday, Oct. 23.

The Stags took control of the game early on by scoring the first touchdown with 11:13 left on the clock, making it a 7-0 game in the first quarter.

The Kingsmen offense struggled to move the ball down the field, allowing three interceptions to be made in the first half of the game by junior quarterback Nick Lasher.

“Nick Lasher does a great job managing the team, we just have to put him in better situations,” Lugo said. “We just have to stick to the details, you know fundamentals and technique are the number one thing for us that we just got to stick with and no matter what happens that has to be our main focus.”

With the Kingsmen’s inability to keep their opponents under control, the Stags were able to put another touchdown on the board at the end of the second quarter, giving them a 14-0 lead.

Senior running back Jackson Taylor commented on the opponent’s defense and their ability to stop the Kingsmen from advancing to the endzone.

“As a running back, I’d just say they probably just flowed a little bit faster than we were expecting, just kind of were all over the place,” Taylor said. “Coming out if we were to play them again, it would probably be more [of us] expecting them to be on the outside and just to be flowing more faster than we were.”

The Stags defense dominated early on, making it extremely difficult for the Kingsmen to move the ball closer to the endzone. Unfortunately, Lasher took a big hit in the third quarter, cutting his time on the field short which resulted in the Kingsmen putting in junior quarterback Hector Gonzalez for the remainder of the game.

Gonzalez was unable to get the ball rolling in the second half of the game. He threw for 35 yards and took on six sacks.

We came out flat in the second half offensively,” Lugo said. “We just didn’t execute like I know we can.”

With the offense struggling to make plays and earn touchdowns, the defense stepped in to stop the running game. The Kingsmen defense had a field day, impeding the Stags from continuing to score more touchdowns.

Sophomore defensive back Daylen Wilson commented on the tough loss on behalf of the defensive side.

“We lost 27-0 so it wasn’t pretty good, we have some stuff to improve on. We did pretty good, just messed up on a few plays, we just have to come back next week and be better,” Wilson said.

The Kingsmen defense came up on a total of 77 tackles. Senior defensive back Zion Brown had 14 tackles and made the only sack from the Kingsmen’s defense. While senior linebacker Connor McDermott had a total of 10 tackles.

Coach Lugo highlighted McDermott and his efforts to keep the defense in the game.

“I think Connor McDermott is kind of the guy, the rock, that we lean on and does a good job every game,” Lugo said. “He’s our main focal point on the defensive side and it translates over to the offensive side.”

Although the Kingsmen may have taken another tough conference loss, the team is still optimistic.

“We’re still going to stay focused, play one game at a time,” Taylor said. “Next week we’re going to be back at home so just going to play like how we played this game, come out and be ready for whoever we got.”

The Kingsmen will take on Whittier College at home on Saturday, Oct. 30 at 7 p.m. for their final home conference game of the season.