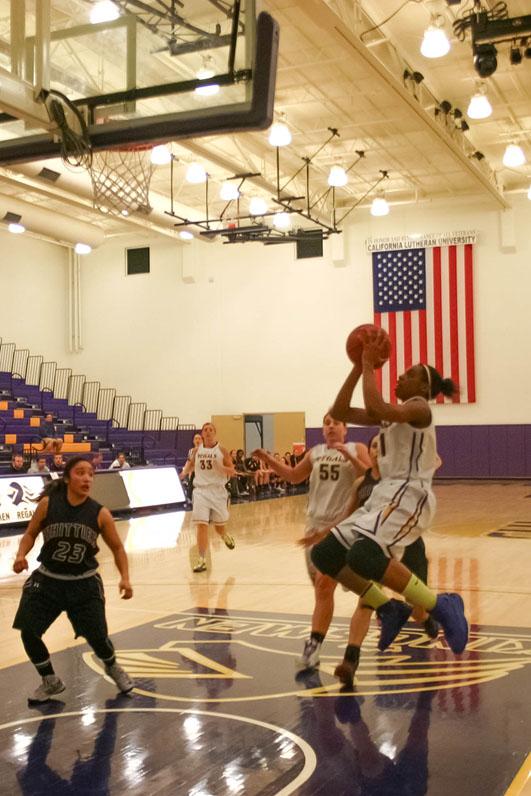 Breaking Away: Jazmyne Porter lays it up to increase the Regals’ lead against Whittier on Saturday night. Photo by Will Mauton - Staff Photographer

With timely second-half  shots, pure rebounding dominance and intense defensive pressure quieting the Whittier Poets’ offensive opportunities in the second half, the Regals beat the Poets 59-38.

This win was followed by a second win against Occidental on Saturday, marking the third straight for the Regals in SCIAC play which will keep them atop the standings.

The game on Thursday night started off slow for the Regals as they fell victim to the Poets’ zone defense. They shot a mere 24.3 percent from the field and turned the ball over 11 times.

“We had great looks and some people missed shots. The people who usually stretch the defense and make threes just struggled with getting shots to go down,” said head coach Roy Dow.

However, senior guard and forward Starla Wright was the dominant player of the first half and led Cal Lutheran in scoring for the night.  She recorded 13 of her 17 points and nine of her 17 rebounds, five of them being offensive rebounds in the first half.

“Starla expended a lot of energy with offensive rebounds early on in the game,” said Dow. “When we were grinding for offense, she kind of made sure we got some kind of offense.”

The Regals trailed early in the game until senior guard Jazmyne Porter made a three pointer, which gave them the lead 17-15 with 10:12 to play.

After the converted three, the Regals’ defense kicked into high gear. They were able to hold the Poets scoreless for 13 minutes until a jump shot was made by Whittier forward Danielle Hays just before the end of the first half. The first half ended with Cal Lutheran leading 24-17.

The beginning minutes of the second half didn’t get any better for the Regals.  Whittier was able to chip away at the lead and come within five points as the score stood 28-23 with 14:20 on the clock.

The Regals then flipped a switch and turned the defensive intensity up while on a 12-3 run for the next 10 minutes.

“We just wanted to execute our plays and focus on our defensive principles and make sure we get stops,” said Wright.

Senior forward Rachel Heagy made back-to-back layups to give the Regals offensive momentum. Then sophomore guard Keeley Anderson swished a three pointer, which pushed the lead up to 35-23 with 12:04 on the clock.

The Regals ended up holding the Poets’ offense to only 17 percent shooting from the field in the second half and pulled away with a lasting lead.

Porter provided the Regals with a lot of energy and spirited play off the bench. She finished with 10 points, seven rebounds and three assists.

“I had to keep the energy up on our team when we were down and keep talking to them,” said Porter.

Dow was pleased with Porter’s play for the night.

“I thought Jazmyne played herself out of a little bit of a slump she’s been in and I thought she played back to where she is capable of playing,” said Dow. “When she plays like that, not only is it good for her, but she makes her teammates better.”