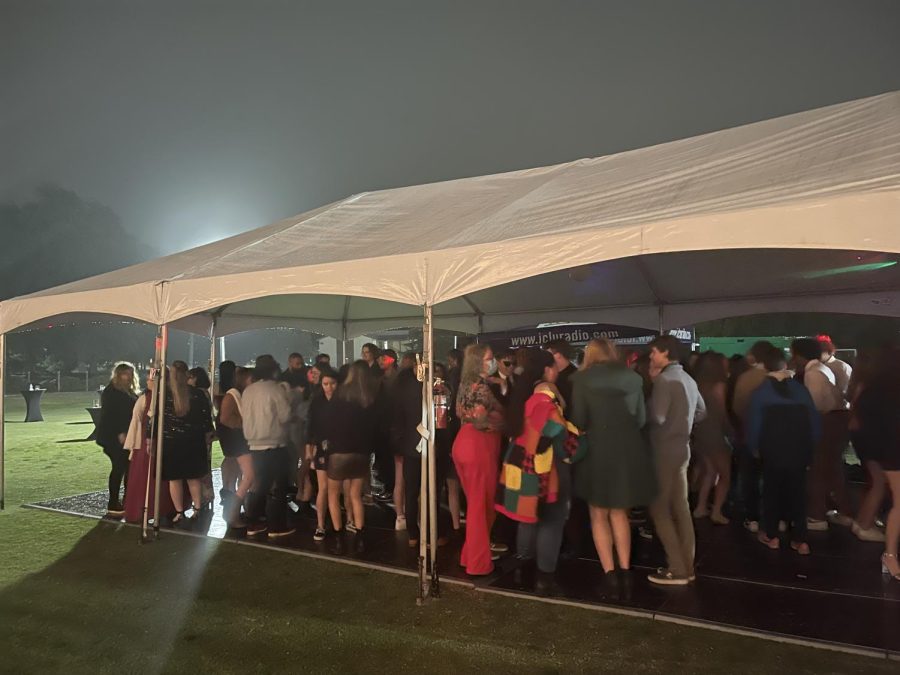 Crowds gather on the dance floor placed on Memorial Field to dance the night away.

The night was hosted at Memorial Park, with a 200 sq. ft. dance floor set up. Despite the cooler temperatures, there were heaters around the area to provide warmth.

Nicole Howell, ASCLUG programs board director said there was a lot of uncertainty when going into the planning for this event.

“Even internally, we were a little bit scared to do anything on campus because we still are in a pandemic and we were really unsure of what things were going to look like,” Howell said. “Planning these events costs a lot of time and a lot of effort.”

Nicolina Ranieri, junior programs board representative and co-event lead, said her board had a lot of planning for this event that centered around COVID-19 and making sure the event was safe for everyone.

“We were really excited just to be able to have Cal Lu come back together at a homecoming event. We were really nervous that we weren’t [going to be] able to,” Ranieri said.

Junior Programs Board Representative and co-event lead Lavleen Sandhu said her board had a meeting and threw around different ideas for what the theme of the event would be.

Ranieri said that when planning this event, the board wanted to keep some of the same aspects as the Monte Carlo dance but give students the option when it came to dress code.

“So we thought that Vegas was a good in between where you can come formal because it still fits or you can come a little bit more dressed down and it still would fit,” Ranieri said.

Flyers and posters were put up in the residential halls and some of the academic buildings in addition to the social media advertising that was done through the ASCLUG instagram page, Sandhu said.

“We kind of put the flyers on there so people are like a bit curious as to like oh, what’s that thing doing right there so in a way it makes it pop and possibly makes a student like stop and be like, Oh, let me look at the flyer and read it,” Sandhu said.

Sophomore Lilianna Iaverone said she was not aware Cal Lutheran held a dance for homecoming before coming here. She enjoyed the fact that there were other attractions besides the dancing itself, such as the casino tables and celebrity impersonators.

“I like the theme and Elvis,” Iaverone said. “It was fun, it feels like more than just homecoming.”

Dani Hazan, a graduate student in the teaching credential program, said besides the changes of venue and theme, she was surprised that ASCLUG was able to get a dance floor on the field.

“Just the fact that it’s outside and it’s rainy, that changes everything for me at least,” Hazan said.

Hazan also said that she enjoyed the night’s music. “DJ Spencer,” who is otherwise known as communication professor and advisor of iCLU Radio Spencer Fischer, was in charge of music at the event.

“It’s probably the best of the homecomings I’ve been to,” Hazan said.

Both Hazan and senior Katie Statema had been to previous homecoming dances, and they agreed that this event was unlike previous years. However, Hazan and Statema said they were glad to be back together in-person.

“I would say it’s just a different vibe I guess because of that but we did have food trucks, which is a normal so I thought that was good,” Statema said.

This event is set to be used to help ASCLUG plan events for the future for their constituents, Howell said.

“I think this is really the the marker in itself to see what we did good and what we can do better and how we can you know use student fees to the best of their ability,” Howell said.

To find out about any future events put on by ASCLUG, visit The Hub.