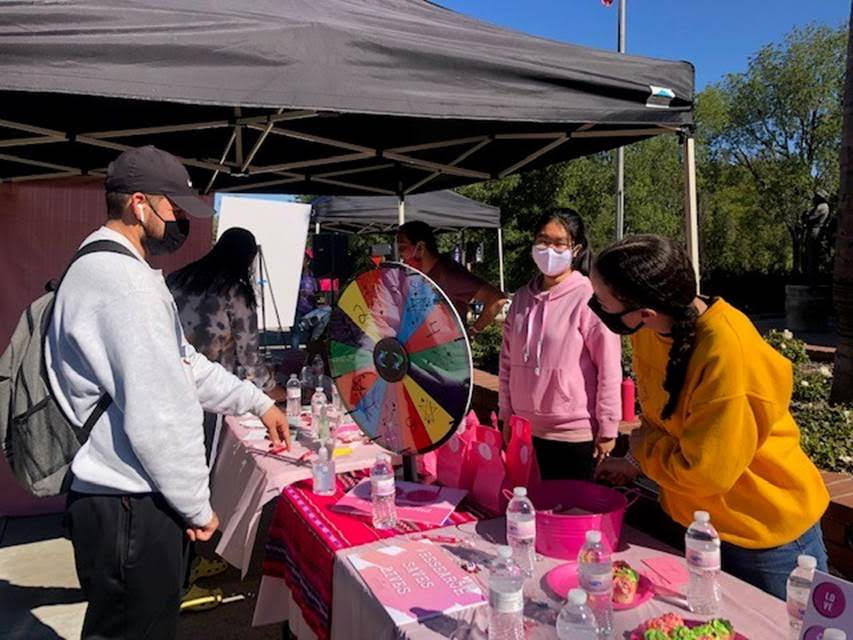 There were various games and activities offered on the spine that focused on educating students about breast cancer.

On Tuesday, Oct. 26, California Lutheran University held a breast cancer awareness one-day event. The event began on the spine from 11a.m. to 1p.m. and continued into the evening with a roundtable discussion webinar held via Zoom from 5p.m. to 6p.m. with 31 people in attendance.

Sophia Khadraoui-Fortune, assistant professor in the languages and culture department, is a breast cancer survivor and young advocate for the organization Living Beyond Breast Cancer. Khadraoui-Fortune said the turnout for the table on the spine had between 120 to 150 students.

“So we did a trivia with a spinning wheel, we had prizes, we also had a backdrop to take pictures. We also had some props with the living beyond breast cancer logo and some hashtags for students to be able to, yeah, to take pictures,” Khadraoui-Fortune said.

Khadraoui-Fortune said students also had the opportunity to write notes during the table-portion of the event on the spine to be distributed to cancer patients at Cedars Sinai hospital.

“I didn’t think that was gonna be popular. But actually, the writing notes to the cancer patients was actually super popular amongst students,” Khadraoui-Fortune said

Louise Kelly, associate professor in the Exercise Science department said she was approached by Khadraoui-Fortune to help participate in the roundtable discussion webinar by discussing research she has been working on.

“My passion since I, you know, started my PhD and afterwards is looking at preventing obesity and metabolic disorders in the pediatric population,” Kelly said.

Kelly said she has helped lots of students get engaged within her research.

“And they get engaged in helping me collect the data, run the analysis and publications. So every student who works with me, my ultimate aim is for them to help [get them] published alongside me,” Kelly said.

Dru Pagliassotti, professor in the department of Communications, was a breast cancer survivor and was one of the speakers during the roundtable discussion webinar. They had made the decision to be open about having breast cancer from the time they found out they were diagnosed.

“I made a very clear decision that I wanted to talk to people about it, I wanted people to see me going through this. You know, I was hoping I would survive. You never know for sure,” Pagliassotti said. “But, you know, the prospects were pretty good. So yeah, that was an important goal for me, to be the education.”

Kelly said that breast cancer is something for males to also be made aware of and not to be “embarrassed or ashamed” since it can affect them just the same as females.

“So, you know, men also, particularly if they’re overweight, they need to do breast exams. After they find something, seek out medical assistance straightaway,” Kelly said.

Paliassotti said some of the best advice they could give is to have someone close to the individual who is diagnosed with cancer to help with the record keeping.

“It’s really helpful to have a friend or in the case of having a loved one who has cancer, being the friend, who can do that paperwork for people, keep track of appointments, keep track of payments, you know, deal with the insurance companies, all those sort of administrative tasks that are just really overwhelming when you’re when you’re going through cancer yourself,” Paliassotti said.

Khadraoui-Fortune said that one of the biggest takeaways from this event is that breast cancer is survivable, especially when caught in early stages, and self breast examinations can help save a life.

“Breast cancer does not discriminate by age, socioeconomic status or race, that every single woman has a risk. And that you know, the biggest take home is that we need to check regularly. We need to be familiar on how to do breast examinations,” Fortune said.