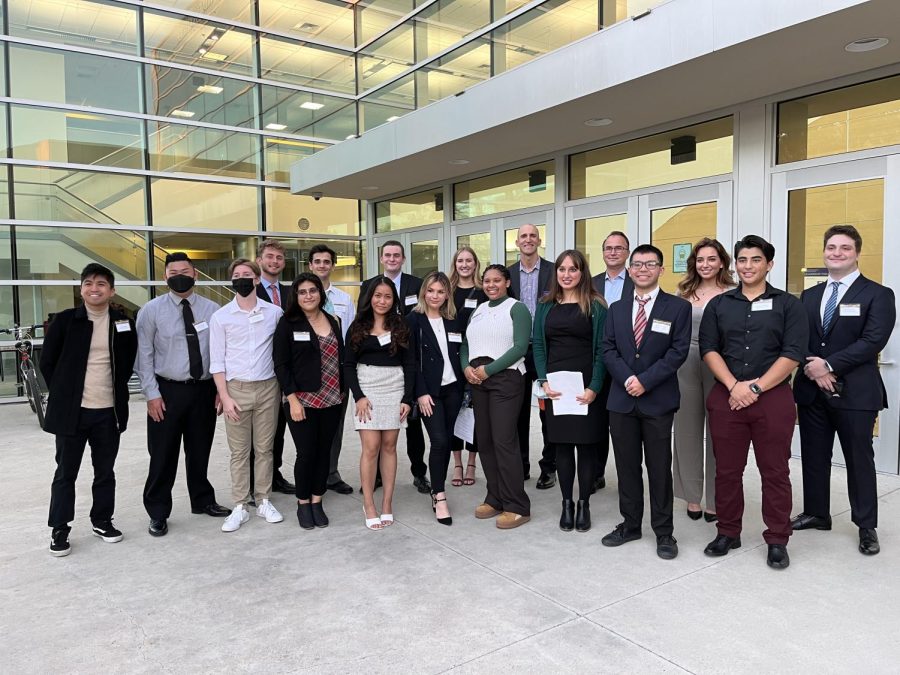 Students had the opportunity to network with professionals who are part of the Thousand Oaks and Cal Lutheran community during this year's Mathews Leadership Forum.

On Wednesday, Oct. 27, California Lutheran University hosted the Mathews Leadership Forum, a networking event meant to help students connect with local businesses and create opportunities for their future, at the Lundring Events Center.

Cindy Keitel, community relations coordinator and event planner, explained the difficulties of planning during the pandemic. She said the forum used to be a dinner and a few hours long, but due to regulations they had to change that. Keitel said she just wanted the event to happen.

“I think students always need to meet community members that can help guide their careers and they want to meet business leaders, faculty, people in the community that can refer them to other people, give them career advice, and get them the headstart on looking for their first job,” Keitel said.

Robin Fielding, university relations coordinator and event planner, spoke about the history. She explained that former university president, 1972-1979, Mark Mathews began the Forum as a class seminar when he was a business professor in 1970. It was later named after him in his honor. Since then he had attended the event until he passed away a few years ago, Fielding said.

Both planners had said they were happy with how many people had come out to the event.

One sponsor was Melissa Miller representing Ventura County Credit Union. She said that the VCCU valued their partnership with California Lutheran University and wanted to help fund, to make sure the event happened.

“Those that are here, want to be here and we want to support you in the ways that we can. We want to make sure that programs happen while you’re here as a student, so connections can happen to you, as a student, because if we can connect you to local businesses, you’re more likely to stay in the area. A lot of times we see kids come to college, they finish college and they either go home or they find a career outside of Ventura County, we want to keep talent here,” Miller said.

Another sponsor that was present was Marlon Herrera representing Best Western Plus Thousand Oaks Inn. He spoke about their owner’s, Felix Wang’s motto, “Serve the community as much as possible.” Herrera said that the company funded the event to serve and get their name out.

“Sometimes you do events and you do it because you want to do it. The benefits is getting the name out there, people will know Thousand Oaks name,” Herrera said.

Amongst the two planners, other people helping to organize the event included the Community Leaders Association. Two student representatives from the CLA Board included senior Sireen Moriarty and senior Abigail Pangilian.

“We really help cater the experience to help students the best way we can, and network the community and the students with it,” Moriarty said.

Pangilian said they contacted local business leaders and previous alumni to come to the event, and gave a speech welcoming and thanking them.

Both had said that this is the first in person event they have had in a while and it had a great turn out. Pangilian had continued on saying that the event was a great way for students to look for internships, or at the very least get their foot in the door and see what the community is about.