Regal Trinity Martinez is ‘as good as they come’ 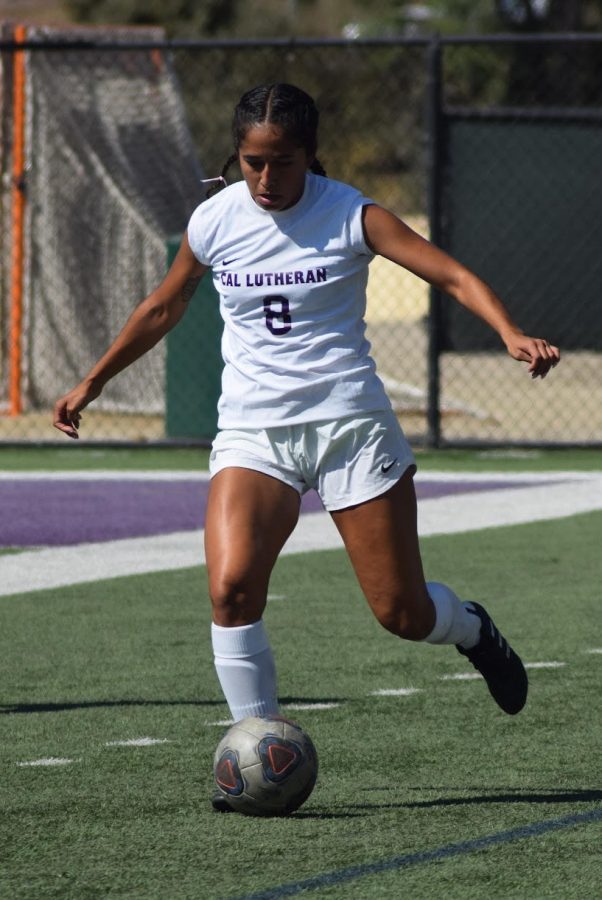 Senior right-winger Trinity Martinez has begun her senior year with a total of two goals within the first 16 games.

Senior right-winger Trinity Martinez has begun her senior year with a total of two goals within the first 16 games for the California Lutheran University Regals soccer team.

Martinez said in a Zoom interview she grew up in Northridge and has been playing soccer since she was 5 years-old.

“I started loving the sport when I got on my first club team. I enjoyed it because it was a lot more competitive. I started off in AYSO in the Woodland Hills area and I would make all stars all the time. I grew from there,” Martinez said.

Martinez said her dad encouraged her to join a club team where she could play more competitively. She joined the Eclipse Simi Valley Soccer Club when she was 12 years-old.

“I played with them for a very long time and it wasn’t until my senior year of high school that I changed clubs and joined the Eagles Soccer Club in Camarillo,” Martinez said.

She has played defender all four years at Cal Lutheran, and it wasn’t until this season Martinez changed positions to right-winger.

Martinez said the transition hasn’t been too bad.

“As a defender it’s just about going up and back the entire game. It was a little bit hard because I just wanted to be on defense and help out defense a lot as a winger but I should be helping offense more,” Martinez said.

She said she does not prefer one position over the other.

Martinez said her proudest moment playing was her freshman year in 2017 when her team made the National Collegiate Athletic Association tournament and broke history for Regals soccer.

“We’ve gone farther than any other Regals soccer team has ever gone in the NCAA playoffs. That was the most memorable experience I’ve ever had here at Cal Lutheran,” Martinez said.

Senior midfielder Sonia Chan said in an email interview Martinez dominates in any position she is put in.

“She works for everyone else on the team so it pushes the rest of us to match her level,” Chan said. “Trinity [Martinez] brings the level of play and competition to new levels because of her work ethic. She will not give up, so it gives us every reason to keep going too.”

Martinez said her role model and biggest supporter is her dad.

“He just understands the love of a sport. He is always there to tell me the right things and to help me and support me,” Martinez said.

Martinez said her team does a good job of seeing when other teammates make mistakes and are getting down on themselves.

“We give words of encouragement and pick each other up. If we see someone is down after a game or after practice, I like to send them text messages or pull them aside and talk to them,” Martinez said.

“You look at the success we’ve had since she’s been a part of the program and our four-year run has just been incredible. She is a true, authentic person who cares so much about her teammates and really wants the best for them,” Marino said in a phone interview.

Since it is her last semester playing for the Regals, Trinity said she is enjoying the little things about playing the sport.

Marino said Martinez has thoroughly improved in all areas since joining the team her freshman year.

“She has an incredible heart on and off the field. She plays with absolute desire, care, and competitiveness. She’s special in that way and you just can’t recreate that,” Marino said.