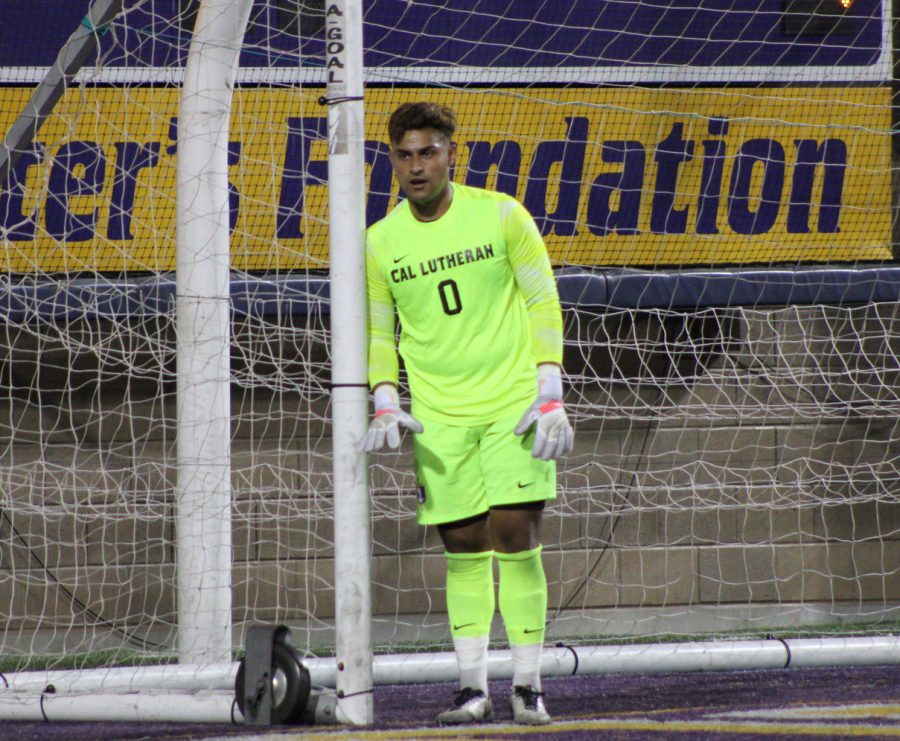 Ivan Lumbrano gets set as the opponent is ready to set up a corner kick.

After being unable to play other seasons, California Lutheran University senior goalkeeper Ivan Lumbrano made his debut playing for the Kingsmen soccer team this fall.

Ivan Lumbrano grew up in Oxnard, California where his parents supported him and his twin brother, Kingsmen midfielder Igor Lumbrano, in their athletic endeavors.

“So it started with us playing baseball and we played soccer, so we were playing two sports and then that’s when our parents just said pick a sport because going back and forth was a lot,” Ivan Lumbrano said.

When faced with having to pick between the two sports, he picked the one that he would play more.

“Growing up as a little kid my parents used to say that me and my brother would always play with soccer balls and just like being athletic,” Ivan Lumbrano said.

His passion for soccer was fostered at a very young age. He believes that his love for the sport began at home during his early years of life.

“I have a picture of myself when I was a baby holding a ball in my hand, so I think it started there,” Ivan Lumbrano said.

With the support of his parents, Ivan Lumbrano continued his soccer career. With his father being his coach and role model, he eventually began playing for club soccer teams.

He played for the Oxnard Waves club up until he was 18 and for a year with Academy in Oak Park.

Ivan Lumbrano attended a year of community college and decided to transfer to Cal Lutheran to major in criminal justice and minor in Spanish.

His twin brother helped him talk to the Cal Lutheran soccer coaches to possibly play on the team.

“So we just spoke with the coaches and told them about my situation. So they were like ‘right after you come just join the team and get started with us’. I joined the team and I’ve been on the team since,” Ivan Lumbrano said.

Although Ivan Lumbrano has been on the team since he transferred, he has been unable to play these past two seasons due to an injury to his shoulder and then COVID-19.

“There’s situations where it’s stopped me from playing in the fall. And then after that season that’s when COVID hit, so technically I’m playing my first fall season this year,” Ivan Lumbrano said.

Despite being able to practice with his team in the spring, Ivan Lumbrano said he felt like he missed out on the fall season.

“I was so excited to play in the fall, but COVID hit so I wasn’t able to play,” he said.

Now that Ivan Lumbrano has the chance to play for the Kingsmen this season he is taking advantage of the opportunity.

“Every practice I go out and try to practice like it’s a game. The way you practice is the way you play,” Ivan Lumbrano said.

He said he puts in all his energy and spirit into his final season.

According to Igor Lumbrano, his brother Ivan Lumbrano is “consistent” every single game.

“If it wasn’t for him we’d probably get scored on more. But thanks to him he’s actually been saving us and keeping us in the game,” said Igor Lumbrano.

With this being Ivan Lumbrano’s final year and season, Ruiz said that it has “been nice to see him [Ivan Lumbrano] grow as a player, as a student, as a human being.”

Igor Lumbrano said that he will miss playing with his brother and shared a fond moment when they were around 14 years old playing for club soccer.

“We were in a penalty shoot out and he had blocked the penalty before and I had to go up there and take the shot and make it. And I made it and the first thing I did was go hug him, because thanks to him we won,” Igor Lumbrano said.

When looking back on the improvements and hard work that Ivan Lumbrano has put into the team, Ruiz said, “He’s matured a lot as a human being, as a teammate and as a player. I mean he’s done a tremendous job from when he first got here.”