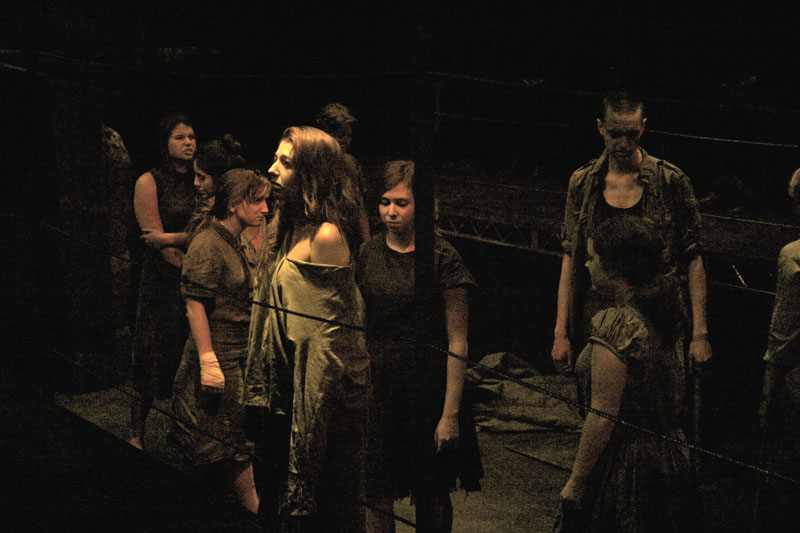 Imagine assault rifles and army uniforms, prisons akin to internment camps and gods as the tycoons of giant corporations controlling the fate of a fallen society’s women.

As the audience enters the room to take their seats, the guards patrolling the perimeters of the prison turn their masked gaze upon them, ushering them to their seats as if they were grouped with the imprisoned Trojans.  At once, the audience becomes immersed into a re-imagined telling of Euripedes’ famous Greek tragedy “Trojan Women”.

Before the first scene begins, the women of Troy can be observed meandering around the hovel in which they are kept. Some huddle around a makeshift fire, others dress their wounds, and some sit idly, staring unseeingly into the distance, looks of disdain and misery etched across their features.

A play following the infamous fall of Troy, “Trojan Women” picks up after the events of the Trojan horse rouse, where women of the fallen nation are captured and placed into a Greek prison by King Menelaus. The story follows the heroine – the valiant, hard-headed Hecuba, queen of Troy – as she tries desperately to remain a leader to her people.

“Our director… [had] a very unique and ambitious vision for this script. Telling the story in a modern voice, in a prison camp built in a bomb crater of a modern city… is an exceedingly successful way to convey the original message of ‘Trojan Women’ to today’s audience,” said junior Erik Klein, who plays King Menelaus.

The cast will attend the Kennedy Center American College Theater Festival at the Los Angeles Theater Center from February 12-14 to reprise their roles in two performances of “Trojan Women.” This is the third consecutive year California Lutheran University has been nominated to compete in the competition. Out of 200 entries in their region, which includes schools from Utah, Arizona, Nevada, Southern California, Hawaii and Guam, the CLU drama department represents one of seven schools invited to perform their play at the theater festival this year.

In addition to performing at the festival, there are different events for the cast to attend.

“The three days of the festival will seem like one entire semester of concentrated theater training. There are workshops, there are speakers, there are competitions, there are auditions and productions,” said Michael Arndt, director of “Trojan Women.”

If the process of actually getting to the festival sounds daunting, that’s because it is. The schools that apply must have their work adjudicated. Everything from set decorating to costumes to the performances of the actors are reviewed and critiqued before the school is considered for an invitation to KCACTF.

Klein is confident that it’s the drama department’s commitment to and passion for these skill sets that has garnered them a return invitation.

“Individuals with various talents, from set, lights, sound, costume, make-up and acting, work most [of the] semester at all hours of the day and night perfecting their gear-work. Then we all come together to create one beautiful timepiece of a play that usually runs for a very short time,” said Klein.

Imagining a Greek tragedy  may bring visions of  long, sweeping gowns in deep, rich colors, architecture consisting of wide pillars and beautiful Grecians seeking to satisfy a plethora of angry gods. The CLU drama department has kept the wrath of the gods, but it’s their modern interpretation of ‘Trojan Women” that has captivated audiences and adjudicators alike.

Junior Curtis Cagliano saw the play during its run at CLU and was not surprised to learn that the cast was nominated to perform at KCACTF this year.

“I definitely came away with an emotional, ephemeral connection with some of those [characters],” said Cagliano.

The theatre arts department will perform “Trojan Women” once more for the CLU community on Saturday, Feb. 9 at 8 p.m. in the Black Box Theatre.