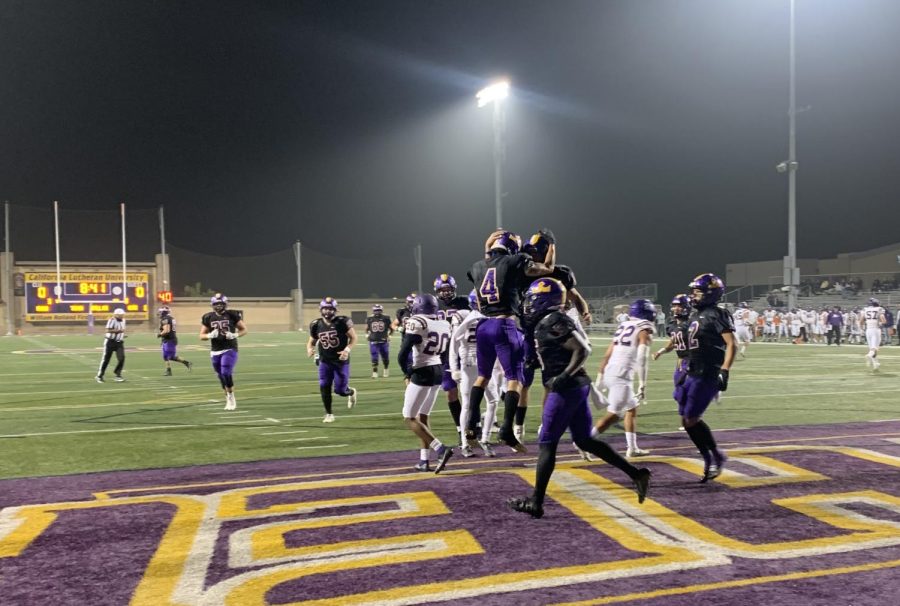 Kingsmen strike first with a touchdown early in the first quarter.

The California Lutheran University Kingsmen reigned supreme on Senior Night with a commanding 45-8 victory over the Whittier College Poets. This win helped improve their overall record to 5-2 this season. This win comes after two consecutive conference losses to Chapman University and Claremont-Mudd-Scripps.

Prior to the game action, a pre-game ceremony was held to honor all of the seniors that will be graduating either this fall or this coming spring. Each of the seniors’ families were in attendance and were allowed to walk their son onto the field for a photo.

Head Coach Anthony Lugo expressed that this season is especially great for all the seniors.

“Everything that we are doing is for the seniors and for each other. We have so many selfless guys and it makes it easy going out to practice and the guys are coming with great energy everyday and it is showing out on the field and in every game,” Lugo said.

The Kingsmen dominated the offensive side of the ball as the team passed for 229 yards and ran for a total of 363 yards, totaling 592 yards of total offense. Junior quarterback Nick Lasher led the Kingsmen with 152 passing yards and three touchdown passes. On the ground, senior running back Jackson Taylor ran for 136 yards and one touchdown.

Since the Kingsmen did hold a big lead towards the end of the game, Lugo and the coaching staff brought in the second and third team offense. In the fourth quarter, junior quarterback was brought in to lead the offense. He then threw a long touchdown pass of 77 yards to freshman wide receiver Johnny Borjas, and the crowd and Kingsmen sideline roared.

Lugo said in a post-game interview how important this win was coming off of back to back losses and heading into the season finale against Redlands.

“We concentrated at the next play. Our main goal was to get better at the details, our fundamentals and technique, and it showed tonight. The guys came through and did what they needed to do each and every play. I’m very happy for them,” Lugo said.

The Kingsmen on defense were able to get to the Whittier quarterback and sack him on three occasions throughout the game. One of those sacks was done by junior linebacker Randal Voutt and he expressed his thoughts on the victory and his thoughts on how much senior night means to the team.

“Tonight was senior night and they’re our brothers and we wanted to come out and perform for them,” Voutt said. “I just really think we came together as a group, as a clique, as a team, keeping Chris Leveque into account too because it would have been his senior night as well, so let’s get together and get a big win for the team.”

The Kingsmen now head into a bye-week and then will travel to play The University of Redlands in the annual Smudge Pot Trophy game on Saturday, Nov. 13. Voutt said that there are takeaways from this game that can be used in their upcoming matchup.

“We got two whole weeks to assess Redlands. It’s a rivalry game, a big conference game. It’s a big game for them as well, so they are going to come out with the same amount of energy, and we are going to play as we always play,” Voutt said.

Taylor also said how much of a boost this win was going into the season finale.

“We are going to go into that game with the steam from this game and just go in knowing what we got to do and get that executed,” Taylor said.

Junior fullback Reid Huseman said what needs to be done in the last game of the season.

“We just got to keep the momentum going and do what we got to do,” Huseman said.