Town Hall Recap: Coming out of the pandemic ‘stronger’ 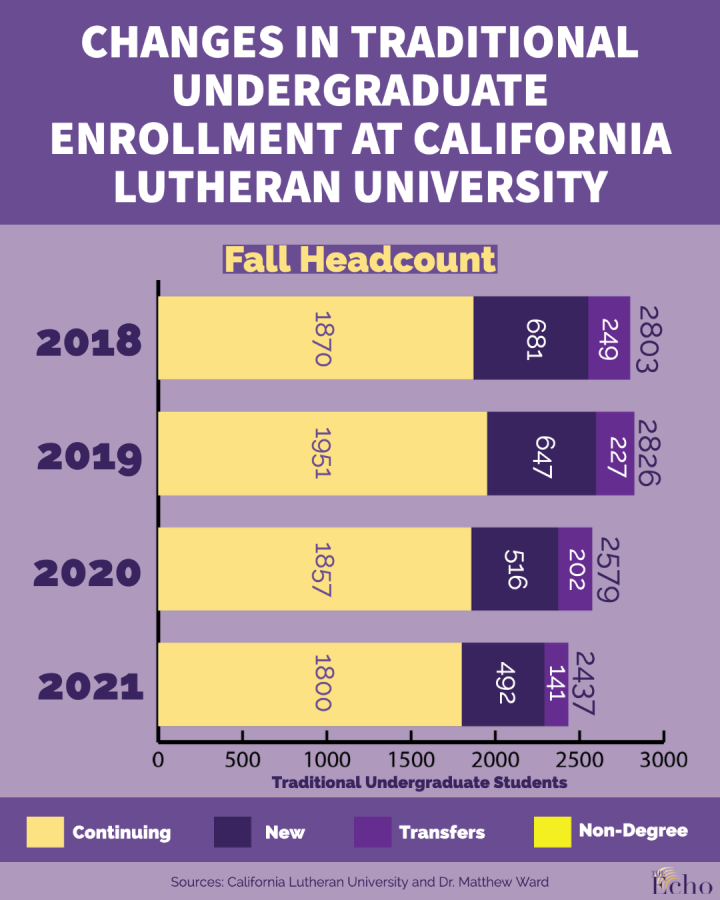 California Lutheran University hosted a town hall on Tuesday, Nov. 2, 2021. According to an email from President Lori Varlotta, the hall was set to discuss enrollment, the new diversity, equity and inclusion (DEI) structure and overall campus updates.

“We did an overview of enrollment and budget, we talked about staff attrition, mental health and mental health resources that are available to faculty and staff and I gave a board update,” Varlotta said.

The meeting, which was invite-only for staff and faculty, was very well attended both in-person and online with standing room only in the Ullman center and over 170 people in attendance over Zoom, Varlotta said.

The meeting had large section of information sharing followed by the vice presidents of several departments leading their own Q&A session at a separate time. Setting up these meetings in such a fashion allows for people who may have been too nervous to say something come forward while also giving attendees time to digest the information they were provided with, Varlotta said.

The university has contracted with a consulting firm called Credo who specializes in strategic and master planning, as well as several other services such as campus planning and architecture, Varlotta said.

“The master plan is the plan that helps us better utilize our physical space and our natural environment,” Varlotta said.

According to the Credo website, their goal in campus master planning is to identify what environments need to be designed to further cultivate that student experience that will then lead to overall success of not only the students, but the overall institution as a whole.

“So by strategic planning, we are going to spend the next eight months or so as an internal community identifying the priorities that we want to tackle and bring to fruition over the next, let’s say, four years,” Varlotta said.

There is currently a tentative plan that starts with a focus group directed towards faculty and staff, whose goal is to start identifying priorities to be further worked on in the coming months, Varlotta said.

During the focus group, there will be a discussion on how to best get student engagement. Following an open discourse with students, which Varlotta said she predicts to take place around the holiday season, more specific plans will be laid and brought to the board potentially from May to August. With board endorsement obtained, Credo will then help with implementation.

One part of the strategic planning is looking at staff attrition rates within Cal Lutheran. According to Varlotta, the numbers are currently at 23% to 24% for employee turnover.

“It’s really important to put this in context that every single president that is participating in these focus groups…has said that they are experiencing the same difficulties that we are,” Varlotta said.

Additionally, Cal Lutheran is seeing faculty and staff of color leaving in larger numbers than their white counterparts in the first three years of employment according to data cited by Varlotta.

“We want to understand why our staff are leaving, I do not want to brush this under the table…we want to dig underneath the surface, we are looking at our own data and finding out some pretty interesting things,” Varlotta said.

The turnover rates of the university are not being taken lightly. Teams have been brought on to investigate these high numbers.

“What’s important for your readers to know is that we are taking staff and faculty attrition very seriously and that we have charged an internal team of data [analysts] to take a look at our internal data,” Varlotta said.

According to Varlotta, there are currently 50 vacant staff positions.

The class of 2023 has seen one of the lowest retention rates of a class at Cal Lutheran in nearly two decades.

There are currently around 3,800 students enrolled at the university. Steps are being taken to bring those numbers back up by inviting the nearly 800 students who have left the school back to attend, according to Ward. This decrease in enrollment, however, is not something new.

“Even before the pandemic those numbers were impacted and exacerbated,” Ward said.

New DEI structures put in place to help with mental health are also part of the proposed master plan. Mission and identity are partnering with Counseling and Psychological Services (CAPS) to further promote mental health awareness within faculty and staff. As of now, there are no plans to change student mental health resources.

“We also have, as part of our insurance, we have this thing called EAP, employee assistance program, that a lot of our employees are not even aware of but they are able to access mental health providers for short term care typically free of charge,” Varlotta said.

The biggest hit to revenue was the loss of residential housing and the meal plans that accompany them, Davis said. Tuition was not nearly as impacted during the 2019-2020 school year.

“The tuition revenue wasn’t really impacted that year because students were able to complete their courses, but then last fiscal year was when, you know, we really had to shut things down and had very limited residential students,” Davis said.

“To date we are still doing financially strong, we have not had to dip into reserves or anything, but we are smaller than we used to be,” Davis said.

The school previously had $117 million before the pandemic but has since dropped to $101 million, giving way to necessary adjustments. Right now, Davis said she remains optimistic but acknowledges that things can change rapidly in these uncertain times.

One thing that everyone has tried to keep at the forefront of their plans has been the students, Ward said.

“We have made cuts to areas that quite frankly impact employees more than students,” Varlotta said.

According to Varlotta, one of three main pillars the school wants to focus on is faculty and staff environment and how to make the university a more fulfilling workplace. There are also plans to look into regional impact and how Cal Lutheran has an effect on outside communities, while looking into partnerships and relationships with businesses, agencies and different organizations. Enhancing the student experience is another theme that the school will focus on in their masterplan.

“We are going to do a focus group for sure with student government, but it is not only going to be student government, I would imagine we would bring some of the clubs together and say hey, can we use your space, can you invite your club members and others who might want to hear about strategic planning, I suspect something will happen with resident halls and commuter students,” Varlotta said.

These three themes are subject to change. Davis said things are no longer business as usual, and there has been a complete 180. Regardless of all the decreases and budget cuts, the higher ups remain hopeful.

“We went into the pandemic strong, we made extraordinary prudent decisions, some of them were difficult, but they kept us somewhat steady during the storm, and that we are very confident that we are going to come out of this pandemic not only as strong, but stronger,” Varlotta said.