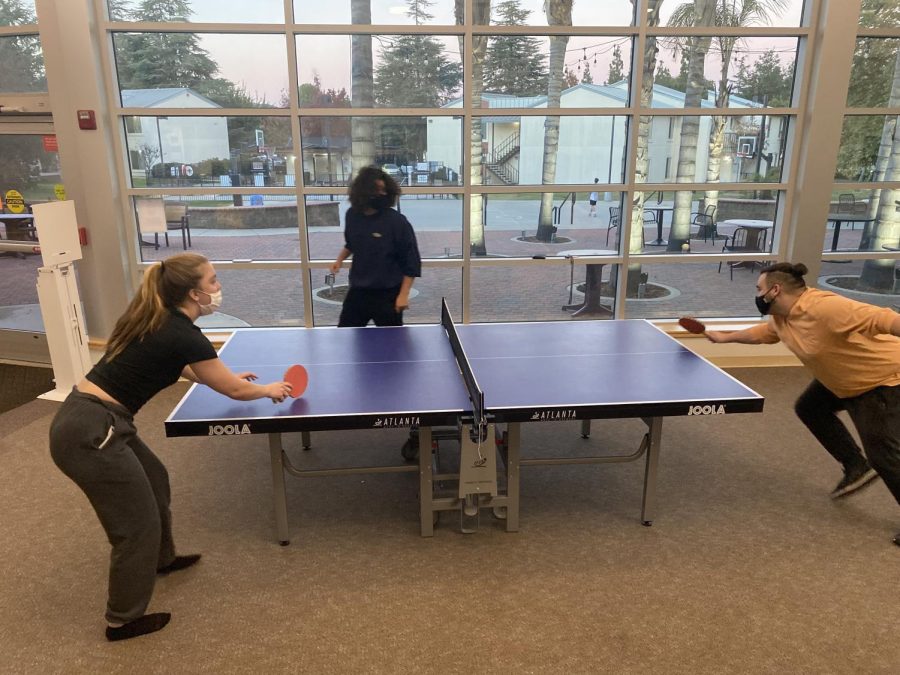 Members including president Dylan Herrera and Treasurer Christina Koch playing Round Robin at the club's meeting.

“This is all about fun we are not trying to take people away from their academics and priorities,” Table Tennis Club Vice President, Dmitri Tabola said.

The enjoyment started when playing table tennis in Mount Clef as first-years to now playing it in Grace Hall.

“I just loved meeting new people through the sport and wanted to share that by making a club,” Herrera said

Their first official meeting occurred Nov. 3 at 5:30 p.m. where Herrera gave a brief overview of the club’s goals and taught other members how to play different table tennis games.

An aim for Treasurer Christina Koch is for others to create genuine relationships and be able to alleviate school stress.

“I want others to learn new games like I did and bond with new people,” Koch said.

One of the popular table tennis games played during meetings is Round Robin, where a group of people play with just two pongs and have to keep on running in a circle to hit the ball in time. Everyone ends up playing with each other and if you can’t hit the ball in time, you are out of the game. These games entail members to be active and competitive Koch said.

“To me it’s the most fun version of cardio you can find,” Tabola said.

The Table Tennis Club has many goals they are striving to achieve in their first year, planning for a table tennis tournament each semester in Grace Hall. The first tournament will be Dec. 3 at 5 p.m.

“I want to get better with other people and increase competitiveness as well. That is why I want to have tournaments and make them one of the main events on campus,” Tabola said.

Members of the club are there not only to have fun but to gain a better understanding of the sport. If you have no experience, we will teach you the rules and basic ways to hold a paddle Herrera said.

“It’s a fun skill to learn because there is a lot of depth to it,” club member Joel Shimada said.

Koch says at the end of the day, we just want to create a welcoming and comfortable environment for people to come and have fun at.

“This club values openness to meeting new people safely and having no judgment,” Koch said.

With the Table Tennis Club branching its roots into the Cal Lutheran community, they hope to raise overall awareness and create more of an active following Tabola said.