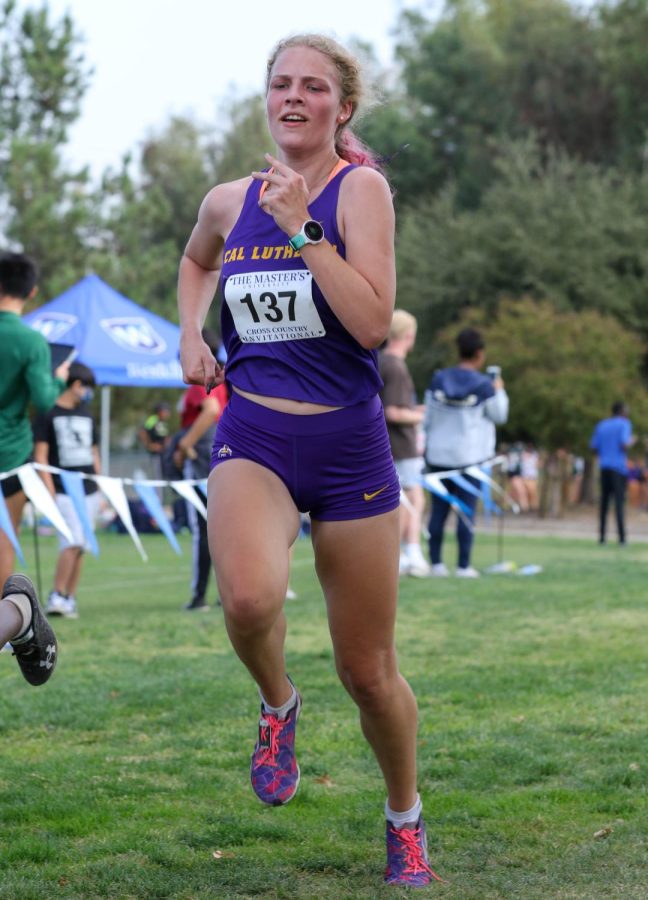 From 6:00 a.m. morning workouts to 12 mile practices alone, senior cross-country runner Veronica Redpath has shown her love for the sport through her dedication and self-drive.

Redpath was born in Southern California and moved to Kansas at the age of three. At 12 years old Redpath and her family moved to Seattle, Washington where her running career began.

“When I moved my parents realized that joining a club cross country team and getting to be on the schools’ track team would be a really good way to make friends,” Redpath said.

Redpath said that for a long time she didn’t love running. She was far more interested in the culture of being a runner like being a part of a team in the company of all of her friends.

It wasn’t until the spread of COVID-19 that she fell in love with long-distance running.

“I couldn’t run with anyone anymore, my brain definitely flipped,” Redpath said. “I am 100% addicted to distance running now.”

On the higher end mileage runs, she would run on her own for 90 minutes and reach 12 miles. She said she would get a ‘runner’s high’ and used running as a coping mechanism.

Towards the end of the 2021 summer, Redpath suffered a hip injury that would end up costing her the first half of the season.

“For the longest time, I was under the impression that I was never going to have any sort of compromising injury that was going to cause me to pull out of the sport,” Redpath said.

Head Coach Brett Halvaks said, “she got hurt and had to miss some training, but she hasn’t let that hold her back from being super positive and super competitive.”

While she isn’t completely satisfied with her last cross country season due to her injury and outside stressors, Redpath still is able to find the good in her last year as a student athlete.

“I think I’m okay with [the season] because I did win the SCIAC championship in track,” Redpath said. “I got to have that moment where I was like okay I worked hard and I achieved something physically.”

Although Redpath’s season didn’t go as expected, she still has many accomplishments to be proud of.

“With my dedication to the sport as a whole, I definitely understand that I do have to put the work in to see the payoffs,” Redpath said.

Coach Halvaks assigned Redpath the leader role of team captain as a result of the positivity and competitiveness she brings to the team.

“Veronica is always a very positive person when it comes to race day, which is great to see and I can see that it has rubbed off on her teammates as well,” Halvaks said.

He also highlights her academic success in earning a spot on the Dean’s list every semester since she’s been at Cal Lutheran.

As the 2021 cross country season comes to an end, Redpath records four races in her senior season, and she will continue running on the Regals track and field team for the 2022 season.