The Kingsmen stay perfect with a 76-60 win over Occidental 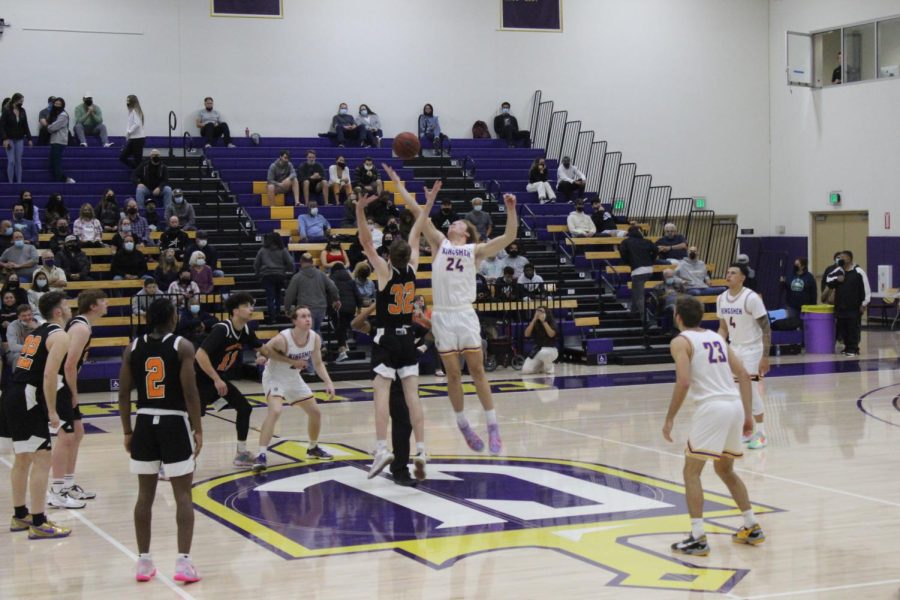 Cal Lutheran and Occidental start the game at center court for the tip-off (Photo by Karly Kiefer-Reporter).

The California Lutheran University Kingsmen basketball team continued their winning streak defeating the Occidental Tigers with a 76-60 victory on Wednesday, Dec. 1. This win put them at an overall record of 7-0 and a 1-0 in their conference.

“They were taking away our main guys leaving shooters like me and RG open to knock down some threes and we just capitalized on that,” Burrage said.

The Kingsmen brought the heat for their first conference game with additionally ramping it up in the second half scoring 37 points and finished the game with 24 bench points.

“We definitely have strength in our depth, you know teams we tire them out in the second half, and they are just not able to keep up with our press and constant trapping,” Grande said.

“We are relentless in our pursuit and generally wear people down and I think we did that tonight,” White said.

Just six minutes into the second half, the Kingsmen had a 15-point lead making the score 55-40.

The increased comfortability with building a strong team relationship this season has helped performance wise.

“The team is bonding very well, the team is hanging out outside practice, going to dinner together…. That is what makes great teams is not only when you have great players but when they get along,” Grande said.

With having the team consist of many underclassmen this season, they are thrilled to compete and be in person playing.

“It’s definitely different from high school, it’s more physical, harder to score, bigger guys. It’s definitely tough out there but I love it and wouldn’t trade anything in the world for it,” Burrage said.

The Kingsmen are focusing on improving their strategizing and communication skills, said White.

“Offensively we need to move the ball side to side more and attack appropriately. Don’t just attack to attack. We don’t want robots, we want players,” White said.

Jacob Alonzo made the final jump shot in the second half making the score 76-57 in the last minute.

“I felt it was a great challenge being the first conference game and come out on top this game, there is nothing more I could ask for,” Grande said.

Watch out for their next home conference game against Loras College Dec. 17 at 5 p.m. in the Gilbert Arena.