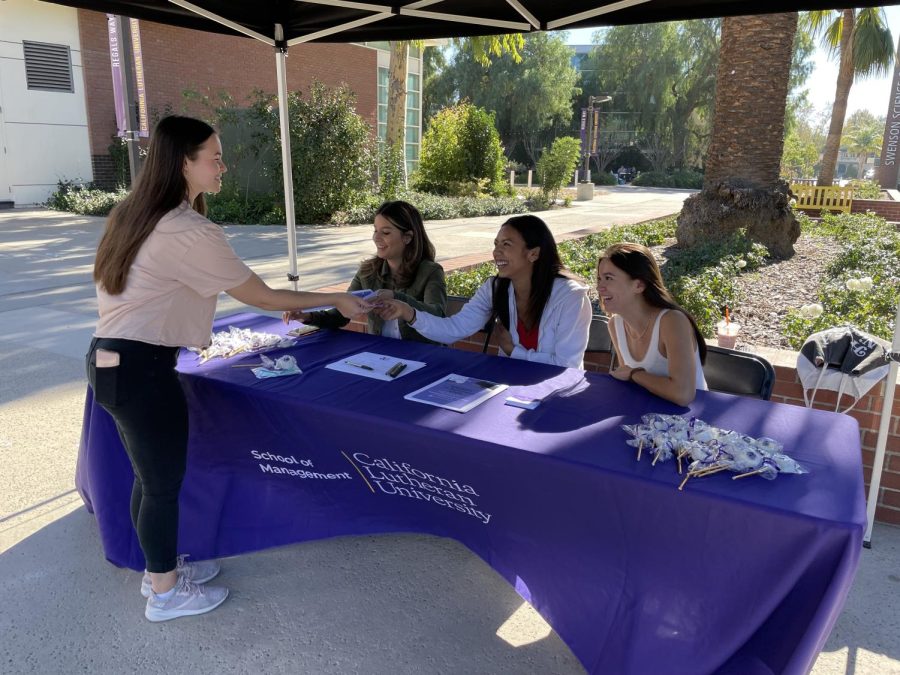 “The Women in Business Club helps young women network and learn anything and everything they want to know in the corporate world and to get them ready for whatever they want to do beyond Cal Lutheran,” Villasenor said.

Castaneda said the club was started based on an idea that she came up with when she and Villasenor were out having brunch.

“Both of us are very ambitious and hard-working women and we have been working extremely hard to make it happen and it’s happening,” Villasenor said.

Castaneda said starting a new club has been a hard learning process.

“We didn’t know what we were getting ourselves into honestly but going into it we had so much confidence we could do this together and going through it was not as difficult as we thought it would be,” Castaneda said.

Villasenor said the club will teach women about the corporate world by bringing in guest speakers and giving members plenty of opportunities to network.

“We also want to do seminars where we will teach them how to dress in the workplace, teach them how a business meeting is run, and we will go up from there,” Villasenor said.

Castaneda said the Women in Business Club is all about empowerment, motivation, mentorship and networking for women to find a place in the corporate world.

“I know it’s super difficult for women to find a place in a business world run by men and I think we need more of a community within Cal Lu,” Castaneda said.

“We want to provide mentors and give them the opportunity to find new jobs and have careers lined up after this club. I want the women to meet the mentors and get their perspective on the business world and how they started their careers and get inspiration from them,” Castaneda said.

The club is advised by Director and Assistant Professor of Business Administration, Ran Lu-Andrews.

“I think this is something related to one particular minority representation in business. It has improved I will say overall in terms of women’s involvement and also leadership positions in the business field, but there is still a long way to go,” Lu-Andrews said in an interview.

Lu-Andrews said this club is not only for business students.

“Our club is starting from the foundation. It doesn’t really matter whether you are actually in the School of Management or not, every job, career, or vocation, whatever that you do, you are going to get involved in a certain type of business,” Lu-Andrews said.

Villasenor said the first club meeting will be on Thursday, Jan. 27 at 5 p.m. From that point forward, meetings will be twice a month.

“We want to make the first meeting more of a social thing just to get everyone involved and active,” Castaneda said.

Villasenor said the club is looking for women who are ambitious, hard-working, and are keen to learn.

“We are going to give them a ton of learning opportunities and we want people there that are going to want to soak all of this stuff in,” Villasenor said.

Villasenor said they are aiming to run an equal amount of business and casual meetings.

“We want to have some social events but mainly we want to run most of our meetings like a business meeting would be run,” Villasenor said.

Villasenor said her and Castaneda were thinking of doing social events similar to the networking events at Cal Lutheran.

“We want them to be more formal so that the people in our club will be able to dress in business appropriate clothing and network to make it seem like a more realistic setting,” Villasenor said.

Castaneda said there were 25 to 30 sign ups from the event alone, not counting the amount of messages received on the club’s Instagram.

“We’re going to email out some information about the club to those who signed up just as a reminder and then prepare for our next meeting,” Castaneda said.

Castaneda said this is the first club at Cal Lutheran that really highlights women in the corporate arena.

“This is something that has been a difficulty for women for as long as I can think of,” Castaneda said. “To have something like this at Cal Lutheran I think is very monumental.”

Castaneda said she thinks it’s important to support women in business because of the motivation and inspiration she gets from seeing her mom as a businesswoman.

“I’ve seen the difficulty she’s faced as a woman having to deal with other men in business and they just don’t really acknowledge a woman,” Castaneda said. “I think it’s really meaningful because it shows as a woman you can do exactly the same thing that a man can do and you can do even better sometimes. Being able to teach women this young is amazing.”