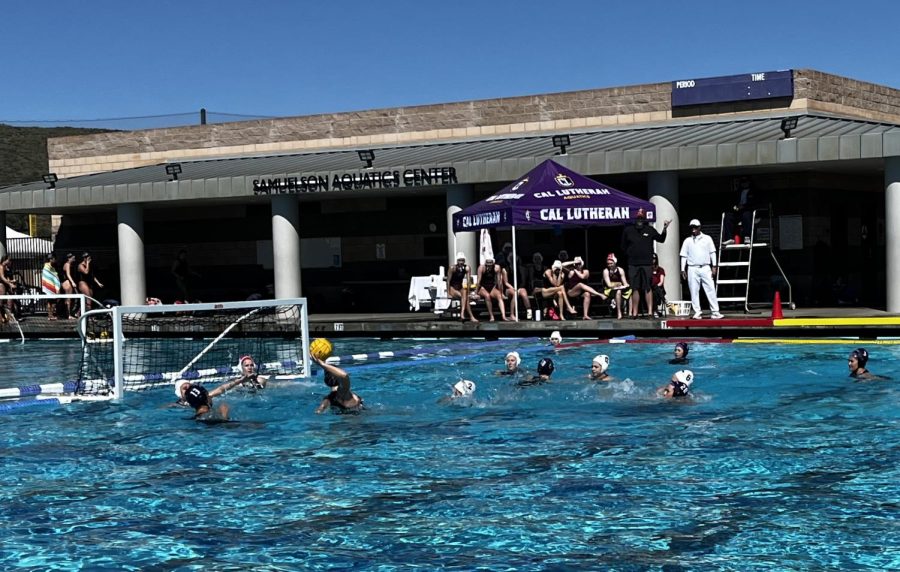 The Regals are on the attack on offense and are moving the ball around on offense.

Last weekend was the 14th Annual Women’s Water Polo Tournament at California Lutheran University and the Regals home opener. The Regals played four games and won three at the Samuelson Aquatics Center on Friday and Saturday.

Prior to the tournament, the Regals had only played two games and lost both. On Feb. 23 they were tied until the end when Claremont-Mudd-Scripps (CMS) scored the winning goal.

Head Coach Cody Pletcher said they struggled handling the press against CMS. The team watched film and talked out strategies to prepare for the tournament. After Friday’s games, he said they’re doing a much better job.

The Regals played Cal State Monterey Bay on Friday at 8:00 a.m. and Austin College at 11:45 a.m. They won both games by one score, generating lots of excitement on the pool deck.

Lexi Rond, Kemi Dijkstra, Jessica Diaz, Bethany Metcalfe and Maddie Stuart showed great offensive skills in the first game scoring a total of 11 goals. Nine more goals were scored in the second game with help from Katherine Knight. In both games, the Regals had moments when they were behind but managed to pull ahead at the end to bring home the win.

Sophomore goalie Izzy De Souza said they tend to scare themselves and the audience when they fall behind, but she said they did a good job adapting and finding the energy to bring the score back up.

“We came off a tough loss to CMS on Wednesday when we lost by one with one second left. But having two games today that we won this time was amazing. It was a great redemption for our team,” De Souza said after Friday’s games

On Saturday, the Regals started off at 9:15 a.m. with a win against Fresno Pacific University. They scored the most goals in one game than they have so far this season and the final score was 15-11.

At 1:00 p.m. they played California Baptist University, a division one school. Despite being in different divisions, the Regals put up a good fight losing 12-10.

Senior two meter offense Lexi Rond said that even though they lost against Cal Baptist, she thinks they still played better than on Friday.

“From start to finish we improved our game together so much and I think it ended up being the best thing for us,” Rond said.

For the seventh year in a row, Cal Lutheran has dedicated the annual tournament to Tina Finali, the late mother of alumna Christina Messer. In the four years of her daughter playing CLU water polo, Tina Finali did not miss a single game. On the back of the tournament’s program, there is a letter to student-athletes and families that she wrote before her battle with cancer came to an end.

“She was a huge supporter of the program. So we decided to try to do something in her memory,” Pletcher said.

De Souza said that she is excited to see how the team grows this season. She said their chemistry is very strong and they all motivate one another to be successful.

“When I make a really big save, it pumps them up. And when they make a score, it pumps me up. So I want to do my best to give this team as much energy as possible and make as many saves as I can,” De Souza said.

Since it is still very early in the season, Coach Pletcher said there is still a lot to learn but he is looking forward to upcoming games.

“I’m excited for where the future’s going to go with this team in particular. We are growing and I’m seeing it,” Pletcher said.

The Regals will play in another tournament this weekend at Harvard University in Massachusetts.

“We’re playing some hard teams at Harvard but we’re ready for it. I think we can take on any opponent whether it’s D1, D2, or D3 so we’re really excited,” Bethany Metcalfe, Junior Attacker for the Regals said.

You can watch the Regals play at Cal Lutheran Wednesday, March 9 at 4:00 p.m.