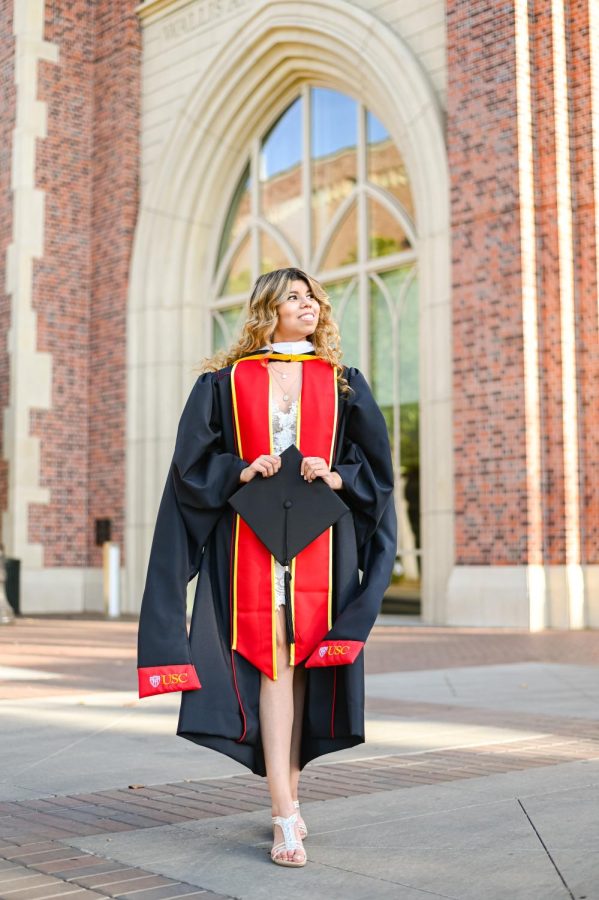 When California Lutheran University alumna Aliyah Navarro was young, her grandmother would always put on Dodgers or Lakers games while she babysat. Navarro’s passion for sports has carried into the present day, and she is currently a digital programming coordinator for The National Football League (NFL).

Navarro knew she wanted to enter the sports industry, and she found her first sports-related internship through Cal Lutheran. She interned for a public relations company called Delsohn Strategies, which belonged to Steve Delsohn, a former Entertainment and Sports Programming Network (ESPN) reporter. Her other internships included work for Sport Court of Southern California, Guitar Center, Beverly Hills Sports Council, and Fox Sports.

Navarro worked at The Echo during her time at Cal Lutheran, and she said being a photojournalist ignited her interest in sports photography. She mentioned how the courses she took from Kirstie Hettinga, who has a doctorate degree in communication and Jean Kelso Sandlin, who has a doctorate of education in higher education leadership, had an impact on her as well.

“Whether it’s PR, how to write a headline, or multimedia skills, I learned a lot during my CLU time. It not only helped me broaden my skill set, but it also sparked my interest to continue to learn more,” Navarro said.

Navarro took two of Sandlin’s courses, was a part of her and Monica Gracyalny’s, who has a doctorate degree in communication with an emphasis on social psychology, social media research team, and was involved in The Public Relations Student Society of America  (PRSSA), which is advised by Sandlin.

“When we first met, we started talking about being first-generation college students and the kind of grit that it takes. She has a lot of persistence and determination, and she’s also just a very nice person,” Sandlin said.

In 2018, Navarro graduated from Cal Lutheran with a bachelor’s degree in communication with  an emphasis in advertising and public relations.

In May of 2021, Navarro graduated from The University of Southern California (USC) with a master’s degree in strategic public relations and a specialization in sports and entertainment, public relations, advertising, and applied communications. Before attending USC, Navarro took a year off.

During this time, Navarro was a social media specialist for seven different startup companies. However, she said her goal was to be in the sports industry, so she felt this was not where she belonged.

Navarro said she decided to take a leap of faith and apply to USC, and if she was accepted with a scholarship and able to make it financially possible, then she would attend. In addition to reaching out to professors from Cal Lutheran for letters of recommendation, she went to several USC prospective student days and connected with professors in advance.

“I wrote my personal statement in a matter of five months. It took a very long time, but I found it to be a very therapeutic process because I really had to realize, ‘Why do I wanna be in the sports industry? Why is this so meaningful to me?’” Navarro said.

Navarro said that many of her courses at USC involved being immersed in a real work environment. She was also a teacher’s assistant for Jeff Fellenzer, associate professor of professional practice, during the entirety of her time at USC.

“He is now family, a mentor, and a very great friend to me. Being in his class, I got to hear from speakers like Jerry West and Ned Colletti. Each week, there was a different speaker, and you got to hear about their journeys and their sports industry insight,” Navarro said.

Navarro found her current position on LinkedIn after sending in about 90 job applications to various job listings. She was hired after doing three different interviews for the position she has now. She said it has been great getting to work with so many wonderful people and seeing what others who work there have been able to accomplish.

As a digital programming coordinator, Navarro works on managing programming on the NFL website and app. They ensure that all news and content is presented in a timely manner and in a well-structured way on each platform.

Navarro said getting to cover game days and the NFL playoffs were some of her favorite experiences so far. She said it was very interesting to see lots of the behind-the-scenes preparation that went into putting together the Super Bowl, and she admired how dedicated and hard-working each person was.

Navarro’s biggest piece of advice is to network as much as possible and to not be afraid to reach out and connect with others. Additionally, she said to try not to let outside noise affect you and what you are passionate about.

“She’s the queen of networking. Any chance she gets, she’s always networking, and I would definitely say that contributed to her success now. She’s also always so kind, uplifting, and motivating. Whatever she sets her mind too, she accomplishes,” said Citlali Erazo, Navarro’s friend who met her on The Echo.

Additionally, Sandlin emphasized the importance of networking and taking courses outside of one’s major that could provide new skills and enhance one’s abilities.

“Sometimes it can be hard receiving a ‘no’ and another ‘no,’ especially if you’re a woman trying to get into a male-dominated field, but remember that you have the skills, you have the knowledge, and you have the ambition to get through it,” Navarro said.