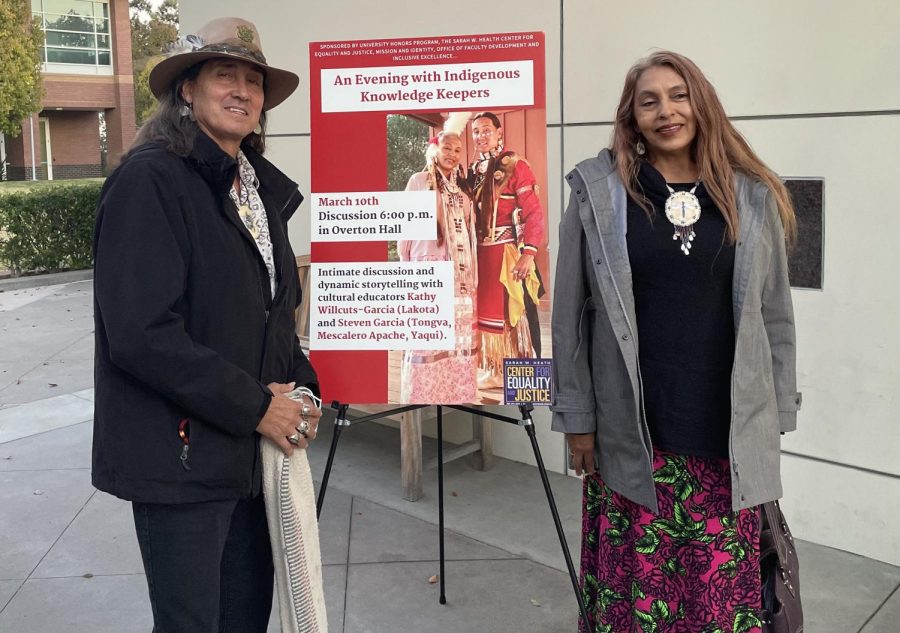 An Evening with Indigenous Knowledge Keepers was an informal discussion between the California Lutheran University community and two Indigenous knowledge keepers, Kathy Willcuts (Lakota) and Steven Garcia (Tongva, Mescalero, Apache, Yaqui). The event was sponsored by The University Honors Program, The Sarah W. Heath Center for Equality and Justice (CEJ), Mission and Identity, and The Office of Faculty Development and Inclusive Excellence on Thursday, March 10.

One of the student coordinators for the event was junior Leroy Stoneham. As a new employee for the CEJ, this was the first event that he helped organize. He said that he has been to a number of different cultural events on campus and he is excited to help bring more speakers and perspectives to Cal Lutheran.

“It’s fulfilling to know that these events are going to interest students and faculty around campus,” Stoneham said.

At 6:00 p.m., the event began in Overton Hall and attendees were able to listen to and ask questions from the Indigenous knowledge keepers.

Before getting into the topics for discussion, Garcia acknowledged the Chumash land that Cal Lutheran is built on and set the tone by playing the flute.

Willcuts and Garcia then started by talking about their upbringings and how they learned to appreciate their culture. Garcia, who was raised in Hawaii, said that he had a hard time identifying with his peers because his father’s side is California Indigenous and his mother’s side is from many parts of Europe. Despite the geographical differences, Garcia stressed throughout the event the similarities that can be found in cultures all around the world. For example, houses made by Indigenous people in Hawaii looked the same as houses made by the Tongva tribe in California which Garcia is a part of.

“We’re all human. We’re from the same human tribe. If you give somebody a tool on the other side of the planet, they’re going to learn to use it too,” Garcia said during the discussion.

Willcuts said that we can help Indigenous people feel more welcomed at Cal Lutheran by inviting more people here and having a space for Indigenous storytelling. She even suggested holding a Pow Wow.

“When you do this you will open up the space for Indigenous people from all over to come to your Pow Wow. It’s a social gathering and it’s a place where Indigenous people can express themselves artistically,” Willcuts said during the discussion.

Many questions were asked throughout the evening. Students wanted to know how they can help honor the land that Cal Lutheran is built on and support Indigenous people here in doing so. Willcuts’s advice for non-indigenous people is to connect with and ask local Indigenous people what support you can give either personally or to the community.

“I’m sure they can share with you all the Indigenous issues that are happening like the missing Indigenous women,” Willcuts said. “There’s walks all the time in different cities. So just going and supporting them, walking with them, or making posters. Just be there in any way you can. Believe me they’ll appreciate it and welcome it.”

In January of this year, Willcuts and Garcia were on campus to lead a Land-Intention Ceremony. Garcia performed an Eagle Dance and sacred tobacco blessing in Kingsmen Park. Stoneham said that it is important for students to learn about Indigenous traditions because Cal Lutheran is built on Chumash land.

“How we treat Cal Lutheran is really important because it’s a part of their culture,” Stoneham said. “They have specific traditions and practices that are important that we should be respecting. We should be supporting them because this was their land first, this is their land still.”