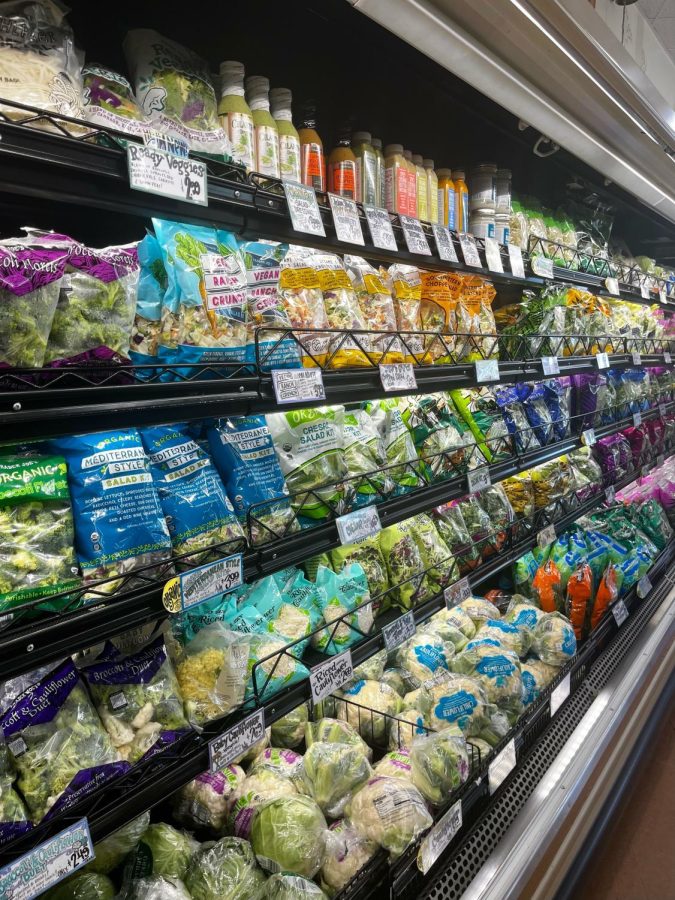 Trader Joe’s provides a variety of organic fruits and vegetables that are good for your body and the environment.

There’s no doubt that a vegan lifestyle is challenging and can take time to get used to if you were raised on a meat heavy diet. However, if you talk to most vegans about their story, they will tell you that switching to a vegan or plant-based diet was the best decision they ever made. I have been vegan for one full year and was vegetarian for two years before that. My only regret is that I didn’t start earlier.

I have met many students at California Lutheran University who are vegetarian or pescatarian, but are hesitant to go fully vegan because they are worried that they won’t be able to get all of the nutrients that they need.

By adopting a more plant-based diet, you will actually be gaining more nutrients than you would be missing out on. Fruits, vegetables, legumes, and beans are very high in nutrients like potassium, magnesium, iron, and vitamins A, C, and E according to an article by Boosting Wellness.

B12 is the most important supplement that vegans and vegetarians need to take because it is only found in the guts of animals and soil from animal feces. If you’re not eating animal products, it’s almost impossible to get this vitamin from whole plant-based foods unless you are actively taking B12 vitamins.

Unfortunately with today’s farming practices, many farm animals are actually deficient in B12 because they are raised indoors and fed unnatural diets.

According to Vegan Fitness, 39% of the general population did not consume enough B12, and the people with the most B12 were vegans and vegetarians taking supplements.

Cindy Lewis is the executive director of Career Services at Cal Lutheran and has been vegan for about four years. She is also gluten-free and soy-free. Lewis said she originally decided to go vegan to improve her health and that she saw the movie “What The Health” where she learned that if you eat well, food can be your medicine.

“I started to remove those from my diet and I felt 100% better, I had more energy, and my brain felt clearer. It was a very obvious change almost immediately,” Lewis said.

Another reason why many students are apprehensive to go vegan is because it is often perceived as being more expensive. However, in the same way that vegan food can be healthy or unhealthy, depending on the products you buy, vegan food can be expensive or budget-friendly.

Oftentimes, shopping without dietary restrictions is expensive as well. Most meat and fish that are available at supermarkets have been imported from different states and countries. The cost of shipping these foods is incredibly pricey and bad for the environment because they have to be refrigerated the entire time they are in transit and in store.

If you buy produce that is locally grown, the price of groceries can often go down after adopting a plant-based diet. You can even visit a farmer’s market to ensure that your money is going to local, small farmers. The produce at farmer’s markets are also going to be in season and therefore better for the environment.

Brock Glatman, a former Cal Lutheran student, said that he spends about the same amount of money on food now as he did before going vegan.

“If you’re going from trying to save money and eating ramen, then going vegan might have a larger financial toll on you,” Glatman said. “But if you are comparing someone who’s buying beef, pork, and dairy to someone who’s just buying plant based products, the cost would be around the same if not less.”

The same goes for eating out. A great example of this can be seen at Lazy Dog located in the Oaks Mall in Thousand Oaks, California which has a menu full of vegan and non-vegan items. Lazy Dog offers nine bowls, three of which contain tofu instead of meat. The tofu options are significantly cheaper than the bowls with meat and are even some of the cheapest items on the menu.

Cal Lutheran has done a good job at making vegan and other allergy-friendly options available at the campus dining locations. Lewis said that even staff and faculty functions almost always have options for her. This is great news for vegan and even dairy-free or vegetarian students on campus.

For commuters or students living in apartment style residence halls without meal plans, Trader Joe’s is a fantastic option for obtaining cheap and convenient vegan foods. Trader Joe’s is known for its low prices because they sell popular items under their brand name at a discounted price. My favorite item from there is their baked tofu. If you have never tried tofu or are unsure about how to cook it, their sriracha and teriyaki flavors are perfect. They can be added in as a replacement for meat in many dishes.

With all of the options that we have as students at Cal Lutheran and living less than an hour from one of the most vegan-friendly cities in the world, there are not many reasons for students to not adopt this life-style.

While being vegan is not always realistic for people from different cultures or living conditions, I do believe that everyone at Cal Lutheran has the opportunity to improve their health, the environment, and reduce harm to animals.

“You just have to have the motivation and some extra time initially for planning as you get used to it,” Lewis said.

If you are interested in learning more or need advice transitioning to a vegan diet, feel free to reach out to me or Cindy Lewis for encouragement.

Most people would agree that there are infinite problems with the meat and dairy industry in America ranging from the environment to animal and human welfare. No matter which reason speaks to you the most, veganism can offer relief to these problems while bringing multiple health benefits into your life everyday.