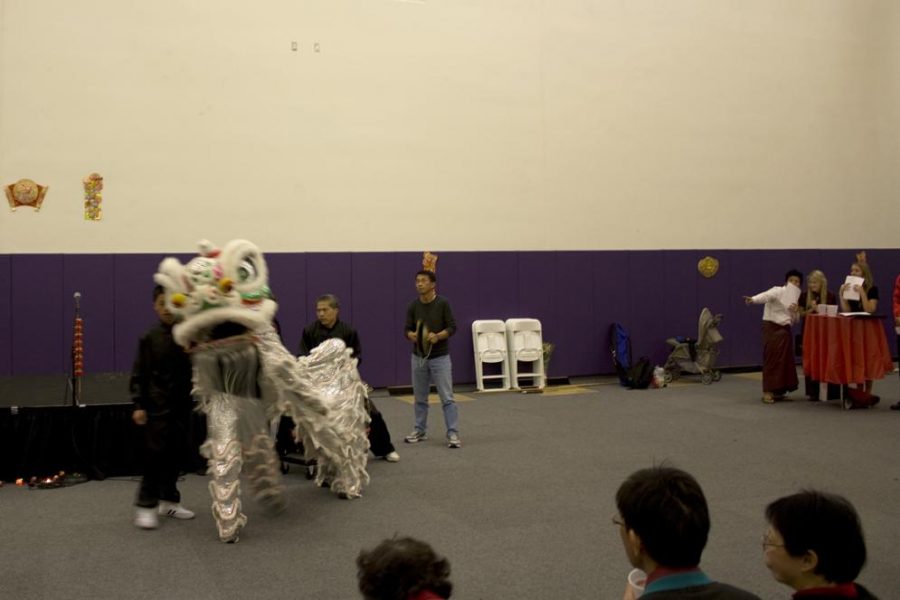 Adding to the celebration: Local community members join in on the celebration by providing a kung fu demonstration for the audience. Photo by Stephen Orth - Staff Photographer

Students, faculity and members of the community kicked off the start of the Chinese New Year in celebration on Thursday, Feb. 7, in the Soiland Recreation Center. The 15-day celebration began with singing, dancing and traditional food from the Chinese culture.

The event celebrated the year of the black water snake. This is a year that occurs only once every 60 years. China is now entering into year 4,711 in their traditional calendar. Their calendar, unlike ours, is based off of when their history began.

“The year of the black water snake is a year of good luck,” said Debby Chang, Chinese language professor and coordinator of the celebration.

“The celebration of the Chinese New Year allows students and community members to experience an opportunity in a new culture that they might have not usually experienced,” said Daniel Lawrence, coordinator of Multicultural Programs at CLU.

With a turn out of about 1,000 people from California Lutheran University and the surrounding communities, the festivities were meant for everyone to enjoy and experience.

“This experience is coming to your doorstep,” said Lawrence.

Preparation for the celebration began in advance with Lawrence and Chang working together to plan and put together the entire event. Students from Chang’s Chinese class also helped organize the festivities.

Junior Travis Emerson is new to Chang’s class and dove right into the preparation for the celebration.

“I’ve been helping with organizing the even and doing anything else that Professor Chang needs us to do,” said Emerson, while he stuffed traditional Chinese cards with gold chocolate coins that represent good luck for the New Year.

Junior Stephany Joudi also helped with the event this year. She has been the MC in past events. She lent a helping hand  for this event by doing whatever left-over tasks needed to be done.

A traditional lion dance and a kung fu demonstration opened the celebration with two dragons dancing to the drums in the background. Chinese singer Ming Ming Jiang, who sang, “A Glass of Beautiful Wine“ and “Beautiful Home,” followed the traditional Chinese performance and demonstration.

Students from CLU hosted the event, introduced the performances and raffled off prizes to audience members.

Local performers studio, Nan’s dance studio, performed the rainbow dance with colorful ribbons and sparkly costumes that captured the audience’s attention. CLUs very own D.A.N.C.E. club made an appearance at the festival with an original dance to “Gangnam Style.” CLU’s hip-hop organization, H2O, also performed at the celebration with their dance “Around the World.”

Phoebe Li, a traditional Chinese fan dancer, performed one of many individual dances that occurred throughout the celebration. Alan Cheng’s Michael Jackson dance was then followed by an original dance by Jacob Garcia.

Throughout the celebration there were performances by choirs from the local community. These included the Yang Sheng male choir, In-harmony choir and Yang Sheng female choir. All the songs were sung in Chinese.

During the celebration, there was a sense of positivity and openness to the culture and events that were going on.

“I thought it was a successful celebration. We had a lot of people and everyone seemed to have enjoyed it,” said sophomore Valeria Perez, student worker for the multicultural program.