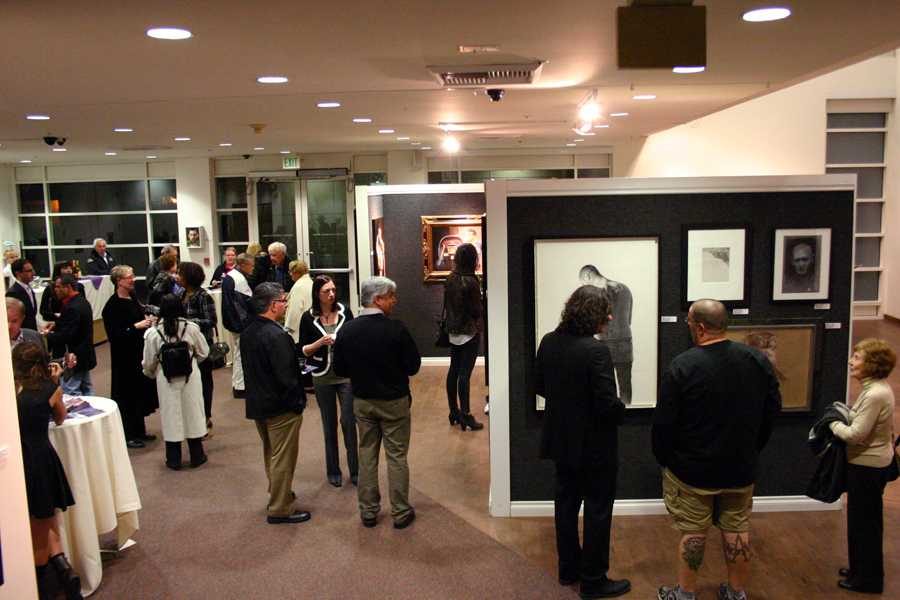 Soaking up the masculinity: Students, faculty, staff and participating artists gather at “The Man Show” reception on March 9. Photos by Will Mauton - Staff Photographer

On Saturday, March 9, there was a reception in honor of the artists who came to showcase their paintings in “The Man Show” at the Kwan Fong Gallery.  The show will be open to the public until April 18.

According to art dept. chair and gallery curator Michael Pearce, the point of “The Man Show” was to capture the essence of men in the many ways they can be represented in the 21st century. The paintings of male figures are represented as gentlemen, romantic heroes, a feminist nightmare or sensitive dreamers.

“Last year, I organized an exhibit called ‘The New Romantic Figure,’ which was very popular. I noticed that there were very few men in the paintings and drawings that we put into the show, so I started thinking about how men are really a neglected subject in representational art. I thought it would be really interesting to do a show that asked artists to make work that was all about the way they thought about men in the 21st century,” said Pearce.

There were artists from Pasadena, Texas and the UK who sent their paintings to the show. There were portraits of people, symbols, self-portraits and landscapes in medias such as oil, acrylic, charcoal, and watercolor that came alive with the vivid colors.

“I know this is one of the most interesting shows we are having on campus and the caliber of the artists who are going to be here and going to be opening, it’s really amazing. California Lutheran University is very seriously part of a movement of representational art,” said art professor Michael Adams.

“In this painting here, I was working for a self-portrait, and I haven’t done one in a while. Between his expressions and the focus in general it has a hip-hop style because I myself like hip hop,” said Sean Ghobad, an artist from Pasadena Art Center.

“The people I look up to that paint, they used features that are most interesting,” said senior Lauren Cabral, an art major.

“The drawing by David Kassan is a homeless guy that you kind of befriend because of his features,” said senior art major Andrew DeGoede. “He did a really detailed job. He tries to get as much detail in a drawing even though it’s just in charcoal, but the most powerful piece is just how much time he puts into it.”

“My favorite painting is probably the one by Carolyn called ‘Under Days,’ the one with the human-animal and the man coming from a spiral walkway holding a lamp. I believe it’s sort of unusual because the human-animal looks like almost pregnant or something and is crying. Makes me wonder what the artist’s intentions were,” said junior Harold Muliadi.

The reception welcomed alumni to come and visit the campus, be a part of the experience and meet all the creative minds.
“I like the different symbols,” said alumna Sarah Muliadi.

The art work was admired by the many students who attended.

Half way through the event, Pearce gave thanks to the people who attended the reception. Pearce said the show is a great way to get people’s attention, especially students who pass by the Kwan Fong Gallery who have the chance to view these amazing paintings.

“I’m happy to have everyone on this show,” said Pearce.