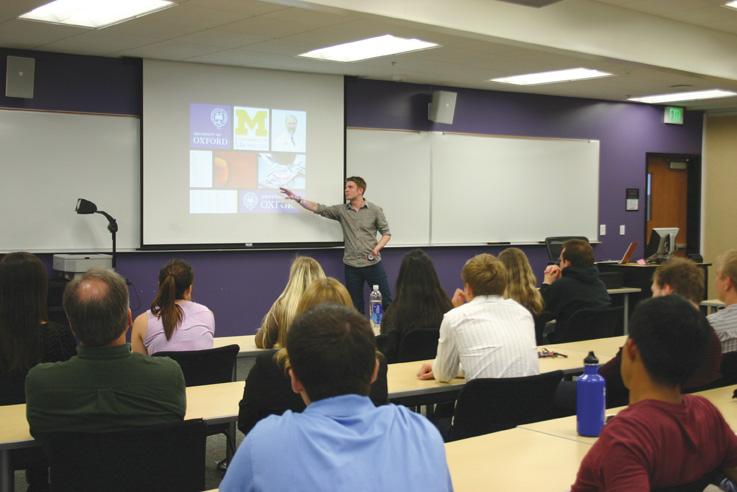 In person classes are slated to resume at the end of March. Pictured: Oxford professor James Groves came to CLU to give a lecture on neuropsychology.

James Groves of Oxford University visited CLU on April 18 to give a lecture on neuropsychology and was met with a packed audience in the Swenson Center.

Groves was originally slated to speak in Swenson 106, but overcrowding necessitated a move to the larger Swenson 101 room.

Four students who participated in the Oxford study-abroad program introduced Groves with stories of the time they spent under his mentorship.

Groves’ hour-long presentation, “New Neurons and Old Tricks,” focused on the interaction between memory and emotion and the neuron generation in human adults.

He covered topics ranging from Clive Wearing, who suffers from amnesia, to his research on the behavior of new neural cell growth in the brains of rats.

David Marcey, the Fletcher Jones chair of developmental biology, participated in the question section of the presentation.

“It was a tour-de-force. A new genetic paradigm was discussed to express a viral tag in particular rat neural cells, and then use that tag as an ablation target,” said Marcey.

Marcey found Groves’ approach to research on hippocampal neuron function in cognitive and behavioral processes to be elegant.

“I tried to speak to an audience that is more general than what I’m used to, and I hope I didn’t lose too many people. I saw a few heads nodding, so I seem to have hit a few people,” said Groves. “Hopefully, I’ve brought another layer of data when it comes to understanding the behavior of these new neurons in the adult brain.”

“The students that have come from CLU have done extraordinarily well, so our reputation is great at Oxford. There are a number of faculty members who might be interested in coming to California, so this is the beginning of what might become a kind of faculty exchange…that’s the great hope, to create a binding relationship between our two institutions, and James Groves is a great person to start it with,” said Brint.

Brint spoke of several Oxford professors he would like to invite to California Lutheran University to speak, including Sarah Simblet, head of the Ruskin School of Drawing and Art, and Daniel Butt, a lecturer in political theory.

“I got involved in this [the Oxford] program three years ago, and I think it’s great. So long as Michael thinks I’m worthy, I’ll keep coming overseas,” said Groves.