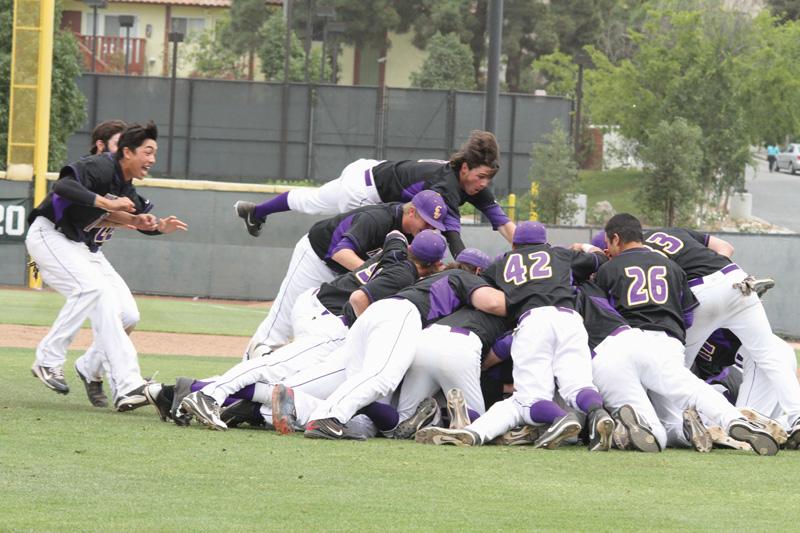 Nothing sweeter: Ramsey Abushahla (left) and Mike Vinyard (airborne center) jump onto the dog pile of teammates as they celebrate their championship victory over Pomona-Pitzer on Sunday afternoon. This is the Kingsmen’s first SCIAC title since 2001. Photo courtesy of Tracy Maple - CLU Sports Photographer

Not even a gloomy Sunday could bring the Kingsmen baseball team down as they beat Pomona-Pitzer 10-6 to win the inaugural SCIAC Baseball Tournament and clinch an automatic berth to the NCAA Division III Playoffs.

“Words can’t describe how I feel right now. I am so excited,” said senior Nick Boggan. “I have been waiting for this moment for four years and for it to finally be here and us be on top, it feels amazing. Unbelievable.”

The word “unbelievable” can be used to describe the Kingsmen season and the success they’ve had on the field.

Coming into the tournament, the Kingsmen compiled a 31-7-1 record (24-4 in SCIAC), won the regular season SCIAC Championship, led DIII in many hitting categories and were ranked eighth in the nation by the American Baseball Coaches Association.

The tournament opened on Friday as CLU hosted the Tigers from Occidental College at George “Sparky” Anderson Field.

The game was a close one, runs were scarce and the game came down to the last two innings. In the bottom of the eighth, the score was tied at 3-3. CLU had runners at first and second with one out. Oxy’s third basemen attempted an inning-ending double by tagging third and throwing to first, but his throw was offline.

Senior outfielder Mike Vinyard, who was at first base originally, ran to third after the bad throw from Oxy. He tried rounding third but was stopped by the third baseman. After a long debate by the umpires and coaches, an interference call was made and Vinyard scored the go-ahead run.

Junior closing pitcher Aaron Roth came into the game in the sixth inning and shut the door for CLU, allowing three hits and no runs. Roth was excellent in closing out games during the regular season and expected the same results in tournament play.

“It’s a big situation and every competitor lives for that. If you don’t want to be in a situation like that, then you probably shouldn’t be playing,” said Roth.

CLU won 4-3 and advanced to the second round to play against arch rival University of Redlands Bulldogs.

Kingsmen freshman Ramsey Abushahla was the x-factor in the game. He was accountable for majority of the offense. He drove in three runs, scored a run and went 3-5 at the plate.

Junior pitcher Tyler Hebda pitched another stellar game for CLU. He went 7.1 innings, and gave up nine hits, but he only allowed two runs, which was exactly what the Kingsmen needed. CLU beat Redlands 5-2 and advanced to the championship game.

In the championship game, the top two seeds battled each other; No.1 CLU versus No. 2 Pomona-Pitzer.

The Kingsmen took control of the game from the beginning by taking advantage of the tired arms of the Sagehens pitching staff and scored nine runs in the first four innings.

Boggan, who hadn’t hit a homerun in a while, hit a mammoth homer over the 400-foot sign in dead center field.

“I was in a good hitter’s count and was looking for something I could drive and square up. I saw a good pitch and just got into one. It was a good one,” said Boggan.

Pomona tried to play catch up and scored a couple of runs, but it was too late.

Roth closed the game out yet again for the Kingsmen and struck out the last batter. He ended up at the bottom of the dog pile as his teammates rushed the field to celebrate the victory.

“To be the guy to finish off Pomona and win the SCIAC Championship, it was a huge emotional rush for me and I was excited,” said Roth. “We did it. We are off to regionals and that’s all that matters.”

The success the team has had this season and winning SCIAC was no surprise to head coach Marty Slimak.

“It’s always our goal and the guys bought into it right away. They did exactly what they needed to do: Win SCIAC and win this tournament,” said Slimak. “[Assistant Coach] Adam Leavitt said it the best, it’s just another checklist of what we have to do and now we have to go to the next checklist. The next item is regionals and we have to do good there.”

The official NCAA DIII Baseball Playoff bracket is scheduled to be released on Sunday, May 12.

The Kingsmen will travel to Concordia University Texas for the West Regional, one of eight regional sites.