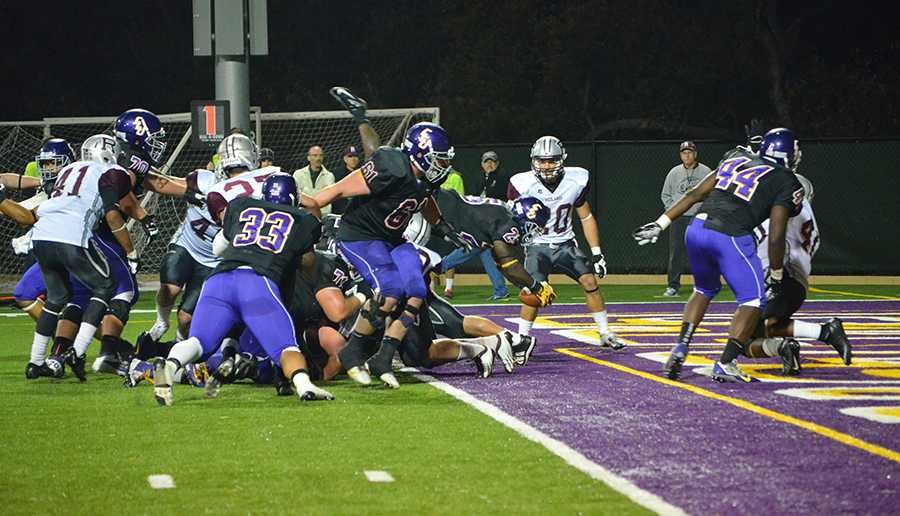 Leap of Faith: Wayne Chapman leaped over the pile for the Kingsmen's lone touchdown of the ballgame. Chapman finished the game with 57 yards rushing on 17 attempts. He also recorded 2 receptions for 21 yards. Photo by Arianna Cook - Staff Photographer

It was a cold and turbulent night for California Lutheran University on Oct. 12. The University of Redlands Bulldogs brought the heat with them and put an end to the Kingsmen’s SCIAC winning streak of 28 games. The game ended with a range of emotions as the Kingsmen lost 7-10, also losing them the Smudgepot trophy.

Oct. 12 acted as the “Blackout” game where the crowd was encouraged to wear black clothes to the game. Similarly, the football team also were “blacked out” versions of their jerseys. However, both players and fans left William Rolland Stadium stunned at the outcome.

“The Redlands game is the biggest game of the year that usually has conference title implications. It’s always a tough and physical game that everyone gets excited to play,” sophomore tight end Alix Moise said.

Needless to say, the game eventually became the game the football players wanted. But not without the slow paced start both teams faced.

The first half did not serve well for either team. By half-time, Redlands was only up by a field goal, 3-0. The third quarter wasn’t any better for the Kingsmen as Redlands scored a touchdown, giving them a 10-point lead heading to the fourth quarter.

The game turned around for the Kingsmen during the fourth quarter. With a little under nine minutes left on the clock, senior running back Wayne Chapman dove over the goal line and scored the first points of the game for CLU. This immediately got the team and stadium back into the game. The “blacked out” crowd broke out into chants. This changed the pace of the game mainly because Redlands had majority possession of the ball.

From that point on, the fourth quarter took a different mood. The Kingsmen were hyped, the crowd was ecstatic and the Bulldogs were pushed for all they were worth.

With 8:10 left on the clock, junior wide receiver Brent Stevens hauled in a 35-yard pass that brought him to the Bulldog 5-yard line. Following two runs by Chapman, one of which looked as if he had scored, and a botched snap the Kingsmen had to settle for a chip shot field goal. Unfortunately, the 20-yard field goal was pushed left turning the ball over to Redlands.

The Kingsmen defensive played well throughout the game, preventing big plays from the Bulldogs. They stepped up again after the missed field goal when senior linebacker Nik Kessler intercepted a Redlands pass at the 30-yard line with 3:08 minutes left, leaving plenty of time for CLU to tie or take the lead.

The rush the stadium felt following Kessler’s pick was short-lived as the offense mustered just three yards on the next three plays leaving sophomore kicker Sean Belotti with a 44-yard field goal attempt. The kick was pushed left once again, turning the ball and game over back to Redlands. All they had to do was take a knee and run out the clock. The heartbreaking loss leaves the Kingsmen 1-1 in the SCIAC and 1-3 overall.

“Redlands normally dominates in the first half, then usually CLU comes back in the second. But, I guess that didn’t happen this time,” said senior Jacob Ramatici, former player for the Kingsmen.

From how the team responded at halftime, it did not appear they had the same drive as years past. And now with Redlands holding the Smudgepot trophy, the Kingsmen are on unsteady ground and eagerly awaiting a chance to get back on track. They’ll get a chance to do that on Oct. 19 when they take on Claremont-Mudd-Scripps at home at 1 p.m.