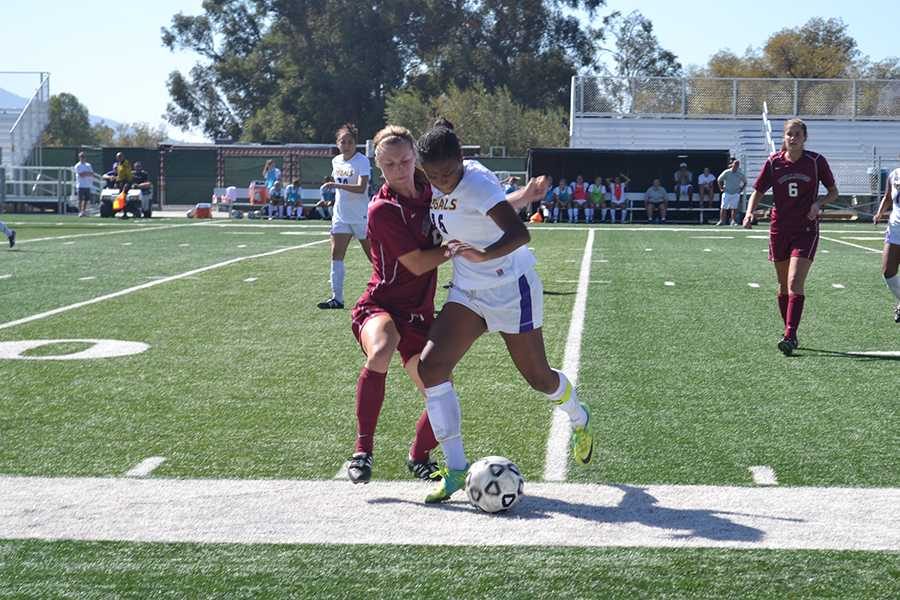 Fighting until the end: Kristina Hulse battles a Bulldog defender on Oct. 12 in a 12-3 come from behind double-overtime victory. Photo by Becky Pruett - Staff Photographer

On Oct. 12, the California Lutheran University Regals played against the University of Redlands Bulldogs and defeated them in comeback fashion, 3-2.

The Bulldogs were first able to score after a free-kick at the 21-minute mark. Redlands’ Megan Marks was found a hole through the CLU defenders and scored by heading in the ball.

The second goal, made by Redlands’ Savannah Laursen, came with 11 minutes left until halftime. Laursen took a free-kick which bounced off a defender into the goal.

The Bulldogs started off the game with more force than CLU.

“We connected a lot of passes throughout the whole game,” said Michael Padilla, assistant coach for the Regals. “We just got a bit unlucky on the finishes. They were really compact and very organized in the back, so it was kind of hard for us to go in.”

Junior forward Taylor Will had a different perspective on Redlands assets.

“They were able to pass the balls through. They could find the holes and they were high-pressuring us and it worked,” Will said.

The second half of the game showed a different Regals team.

“I think our energy going into the game wasn’t as high as it was for the rest of the game,” Will said. “I feel like if we went in with the energy we did the second half and then overtime, we would have started the game a lot better and maybe ended up winning earlier.”

Will scored the first goal for the Regals. With the help of senior midfielder Bailey Marquez, Will was able to shoot past the goalie with a left-footed kick. Less than a minute later, the Regals almost scored again on a great run by Will and freshman forward Bianca Deardorff, but the Redlands goalie made an even better save.

In the 83-minute, sophomore midfielder Brittany Eremita was able to strike, equalizing the score. With both teams tied, the game went into overtime and the first one ended without any action. Fifteen seconds into the second overtime, Will scored her second and final goal of the game, leading CLU to victory.

“I definitely think that we played better soccer,” Will said. “I think we could connect our passes better, but overall, in the first half their energy was better and then their through balls were a lot better than ours.”

Will added that it was just a matter of them sticking it out.

“Overall, the team played very well,” said CLU student Salvador Brito, who attended the game. “When CLU made their second goal, I knew we had high chances of winning. The Regals put pressure on the other team, which allowed them to score throughout the second half.”

Padilla said that they might add some drills to their training for future games.

“Maybe in training, we’ll do a little more of repetition and finishing in front of the goal with no pressure and then we’ll add pressure, so a lot more repetition, finishing and playing a lot of keep-away,” Padilla said.

The Regals next home game is scheduled for Oct. 23 at 7 p.m. against Claremont-Mudd-Scripps.