Water polo down but not out 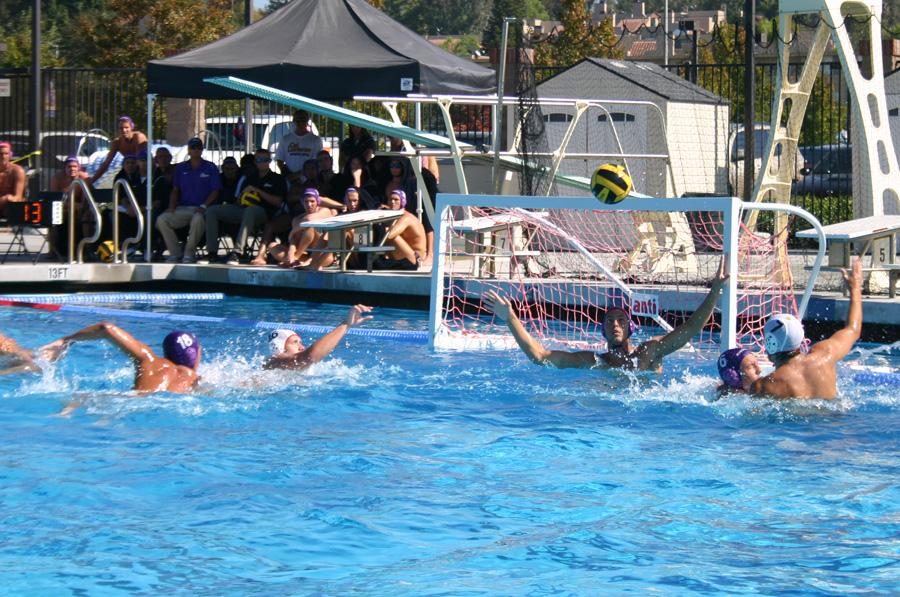 Still battling: Senior Max Zappas (left) attempts to score on Oct. 26 against Claremont Mudd-Scripps. Junior Jesse Owen (above) looks to defend a pass from the Stags in the same matchup at the Samuelson Aquatics Center. Photos by Kine Rossland - Staff Photographer

The late resurgence from the Kingsmen water polo squad was not enough to defeat top seeded Claremont-Mudd-Scripps in a SCIAC matchup on Oct. 26 at the Samuelson Aquatics Center.

The California Lutheran University Kingsmen looked to remain relevant in the SCIAC while facing the undefeated Stags. CMS stands atop the standings while CLU trails shortly behind.

CLU fell behind early in the game, but found themselves on the board off a goal by sophomore attacker AJ Franklin. However, CMS continued their strong play for the remainder of the first half. CLU found themselves down 8-3.

While the CLU waters were cold and still in the first half, the Kingsmen turned on the jets and began to showcase their talents.

Piggybacking off swift shooting from freshman attacker Zack Card, the Kingsmen made a push in the second half. Card, a Burbank High School recruit, had a game high four goals as well as an assist, drawn ejection and a steal.  Senior utility Spencer McGrath also found the back of the net with an impressive touch shot over the CMS goalie, bringing the score to 10-8.

The match began to heat up with towards the end of the game. With four minutes left on the clock, Freshman center Cameron Hauer took matters into his own hands and fired his lone goal of the match bringing CLU within three. Card followed Hauer with his fourth goal of the game to bring the Kingsmen back within two.

CLU continued to flex their defensive muscles and set the pace offensively. Senior utility Max Zappas and Hauer each drew two ejections in the match, which gave CLU many man-up situations with numerous opportunities.

But, the Kingsmen did not do enough to bring home the “W,” as they fell to the Stags 13-11. The Stags were led by Mark Nietzel, Eric Bakar and Maarten Lefor. CMS goalie James Kelly solidly manned the posts, recording 11 saves on the day.

Zappas was unsatisfied with the way his squad came out to play.

“We came out kind of slow and they got an early jump on us in the first quarter,” Zappas said. “Unfortunately, that’s all it takes in this league because all of the top teams are very close.”

Despite the rough start in SCIAC play, Zappas was optimistic about the rest of the season.

“The good news is that the season is far from over and we have gotten some very hard games out of the way early. Our sights are still set on the SCIAC championship and our offensive and defensive schemes are looking more and more cohesive,” Zappas said.

Franklin, who has been a catalyst to this offense, shares similar views as Zappas.

“I think the only thing we can do in the future for this season is move forward knowing we had some tough hard fought games against some tough teams,” Franklin said.

The Kingsmen squad will face stiff SCIAC competition soon. However, Franklin thinks the Kingsmen can handle it.

“Looking forward, we still have some tough teams to get through and I think the biggest thing for us is to keep the energy and focus throughout the entire game,” Franklin said. “When we are all fired up with energy and on the same page with the game plan, we play great.”

The Kingsmen look to make moves toward the top spot in the SCIAC when they face off against Pomona-Pitzer Wednesday, Oct. 16 at 4 p.m.