Started from the bottom 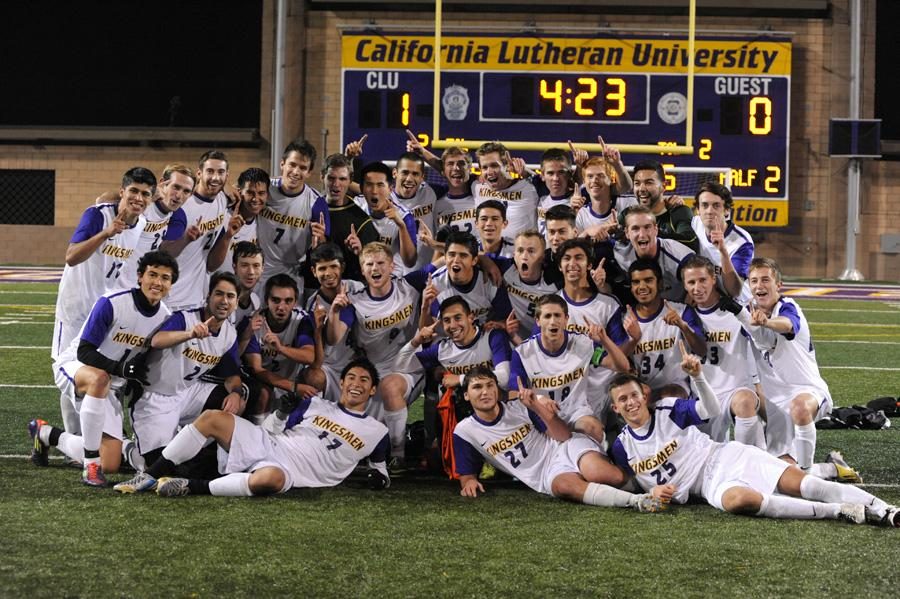 Now they here: CLU won an overtime thriller on Nov. 9, earning them an automatic bid to the NCAA tournament, their fifth appearance. Photo courtesy of Tracy Maple - Sports Information Director

Junior midfielder Thiago Gaglianone was the reason for cheers and tears as he scored the winning goal against Chapman at the 95-minute mark on Nov. 9. The overtime goal made the Kingsmen the SCIAC tournament champions.

The California Lutheran University men’s soccer didn’t let midseason issues dictate the rest of the season. The team had lost four consecutive games halfway through the season and hadn’t had a winning season since 2007. But they turned things around and won the first SCIAC postseason tournament title in CLU history. This achievement also led to the team’s first NCAA postseason appearance since 1998.

“I’m just so excited for the players because it’s been years coming and we’ve had our stumbles and injuries and teams years before this had lost,” said Daniel Kuntz, head coach for the Kingsmen. “To see them achieve this and to realize what they can do and to be on the national reach is something that you only get to do a few times so it’s exciting.”

Kuntz said the team lost their leader, along with some other players, midseason which lead to the midseason defeats. However, the team regrouped and continued to work hard.

“The number one thing is to be together, have faith in each other and continue to work,” Kuntz said. “This is a phenomenal experience, so we’re just going to enjoy every single second of it. We’re going to continue to do the things we’ve been doing and we’re going to try to work on those and polish.”

The game was not an easy one for either team as both pushed to make the winning goal. During the first half of the game, the Kingsmen had seven attempted shots, some of which were either too wide or too high. The Panthers had five attempted shots, only two of which sophomore goalkeeper Jack Duncan had to block. By the end of the first half, the score was 0-0.

The second half of the game was drowned by the booing of the crowd who was unhappy with the calls made by the referee. The referee eventually pulled through for the Kingsmen and gave Chapman defender Chris Darling a yellow card after he pushed and knocked over freshman defender Gabriel Fernando. This didn’t lead anything for the Kingsmen and by the end of the second half, the score remained 0-0.

Overtime began with the Kingsmen playing great defense by stopping the Panthers from scoring as they had the Kingsmen goalkeeper surrounded. The moment was short lived however as the Kingsmen answered back and pushed through the Panthers’ defensive line and scored the winning goal.

“We feel great,” said senior midfielder Ivan Sanchez. “We have to keep working hard and take it one game at a time as we’ve always done.”

Junior defender Jorge Galvan said he was never afraid that the team wouldn’t make it this far, but the midseason losses were a wakeup call that made all played on the team work harder to get to the championship game.

The Kingsmen will travel to Texas to take on host Trinity University on Nov. 15 in the first round of the NCAA tournament.