They messed with Texas 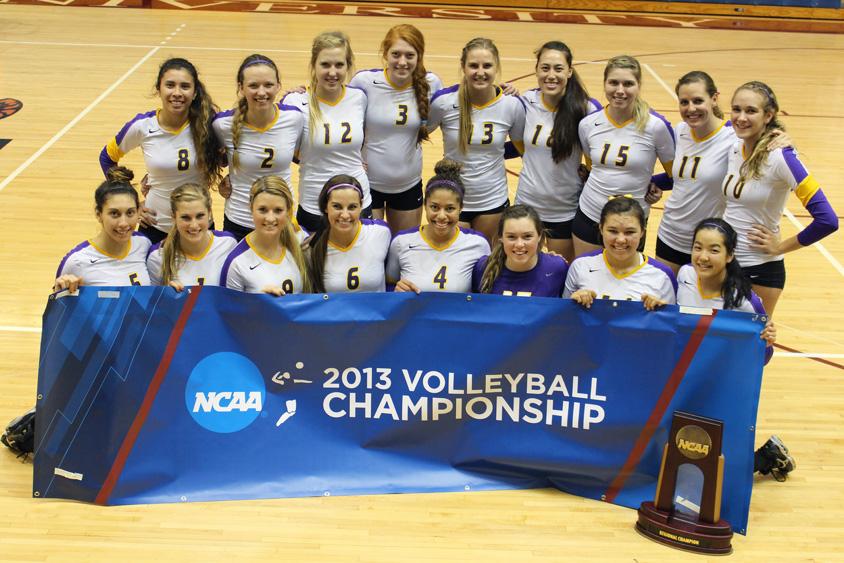 Feeling Elite: The 2013 Regals now hold the CLU volleyball record for most wins in a season with their current 33-1 record. They will be moving on to the Elite Eight in Holland, Mich., which they missed by just one game last season after falling in the regional final. Kylie McLogan had a total of 55 kills in the three matches and was named tournament MVP. Photos courtesy of Tracy Maple - Sports Information Director

Regals volleyball brought home another championship this past weekend after defeating Trinity University in the final match of the NCAA Division III Volleyball Regional tournament. With much determination and endurance, the Regals won each of their three matches during the regional, bringing home another trophy to add to their case.

The first game on Nov. 15 was against Hardin-Simmons University. The Regals fought hard for their 3-2 win after being down in the first two games of the match. During the fifth game of the night, junior outside hitter Kylie McLogan ended the game with three consecutive kills, making the final score 13-15. Top scorers for the night included sophomore outside hitter Allie Eason, who had 14 kills, sophomore right side hitter Pua Mo’okini-Oliveira with 10 kills and senior middle blocker Hayley Tamagni with 7 kills.

On Nov. 16, the Regals took on University of Texas at Dallas in game two of the regional tournament. However, this game was a quick sweep for the Regals, beating UT-Dallas 25-19 in the first set, 25-20 in the second set and 25-16 in the last set. Junior libero Kennedy Peters had two service aces in the first match, setting the tone for the team. Games two and three were easy victories as senior setter Jackie Russell had 31 assists for the afternoon, and McLogan, again, bringing in a double digit mark of 17 total kills.

This second match victory in the regional set a new record for Regals volleyball in wins, making them 32-1, which surpassed the previous record of 31-7 in 1987.

“I am pretty happy with how we played and how hard we worked. We are continuing to believe in ourselves and proving that no one will take this title from us,” Tamagni said.

The final match of the tournament against Trinity was on Nov. 17. Losing their first set 16-25, the Regals fought on and won the last three sets, giving them a 3-1 victory against the Tigers.

Senior middle blocker Lauren Rohach had a total of eight kills for the night.

“We really had to fight for these games, so it might not have been the best we’ve played all year, but it was the hardest we fought all season and the most heart we’ve shown,” Rohach said.

The Regals’ performance allowed for a total of 63 kills for the night, 20 of which came from tournament MVP McLogan and another 16 from Mo’okini-Oliveira. Russell brought in 45 assists and junior setter Jenna Chavez tallied 11 more, adding to the total of 62 for the match.

In an interview with clusports.com, Head Coach Kellee Roesel said that the final game was a “gusty performance by a bunch of fighters.” The Regals were named All Tournament Team in the Western Regional Volleyball Tournament.

The Regals now advance to the Elite Eight in Holland, Mich. where they will compete this weekend for the Division III Volleyball national championship title.