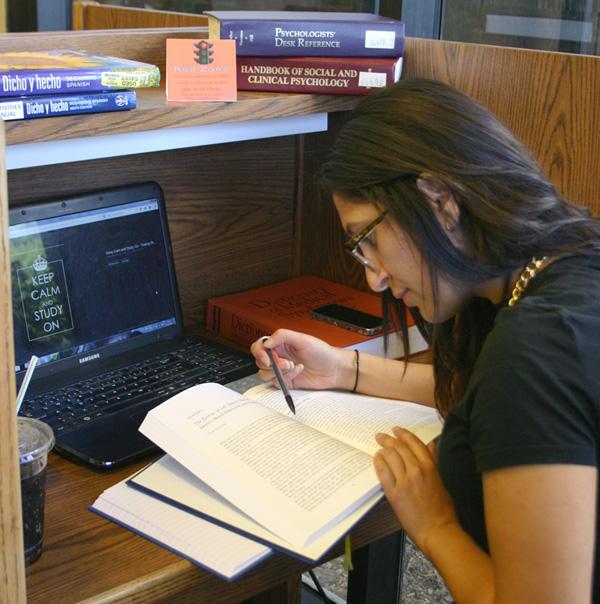 Harsh realities: Junior Roua Al-Toma may have been picturing her nights out to include going to dinner or a club, not studying in the library. Photo by Kine Rossland- Staff Photographer

Some high school graduates remember that feeling of overwhelming excitement and anxiety brought on by entering college.

As students begin four years of dorm rooms, cafeteria food and late night study sessions, expectations are likely to spiral through their minds. One of the first aspects likely to be thought of is how difficult the work load may be.

“Coming out of my high school, I felt that I was well-prepared but definitely expected [college] to be physically and mentally taxing,” said junior Scott Peters. “I’ve learned through the years no matter the workload, as long you know how to manage your time, you can be successful.”

Time management is key in academics according to some students.

“I actually thought it was going to be a little hard,” said freshman Austin Vial. “I mean, I haven’t had to take any finals yet as a college student, but I’ve learned to manage my time right and it’s been working for me so far.”

Making new friends can be a foreign concept to some incoming students who have been friends with the same group of people their entire lives.

“I was pretty lucky. I participated in the SOAR program put on by SSS when I was a freshman and we got to stay on campus a week before school started, which is where I met a lot of my friends,” said sophomore Czarina Gutierrez.

It may be more likely that students will meet friends by participating in clubs, through sports or in class rather than at a house party or local bar.

“Baseball really helped me make new friends,” Peters said. “I moved from Hawaii, so I was a bit nervous at first, but I met so many good guys on the team in a short amount of time, which has made my time here so much better.”

Dorm life is a toss up, especially when it comes to relationships with roommates. Having to live with a complete stranger in a small room can be a difficult adjustment from living at home, but some dorm assignments can work out.

“I live in Thompson and I was actually pretty impressed with the dorms. My roommates are cool and we have a huge bathroom, which is nice,” Vial said. “The RAs are a bit strict, but they are just doing their jobs.”

Partying can be a focal point of college expectations. But, since CLU is a dry campus, the parties are held off campus.

“Obviously, there’s not a whole lot going on around campus, but I’ve been to some parties off-campus and had fun at pretty much all of them,” Vial said.

The lack of Greek life seems to be beneficial for some students’ expectations.

“I actually like the fact there aren’t any fraternities here. I know some people may not agree, but I just like knowing everybody when I go to parties,” Peters said.

Incoming freshman have his or her own expectations of what college should be like, but it’s up to them to make those expectations come true.