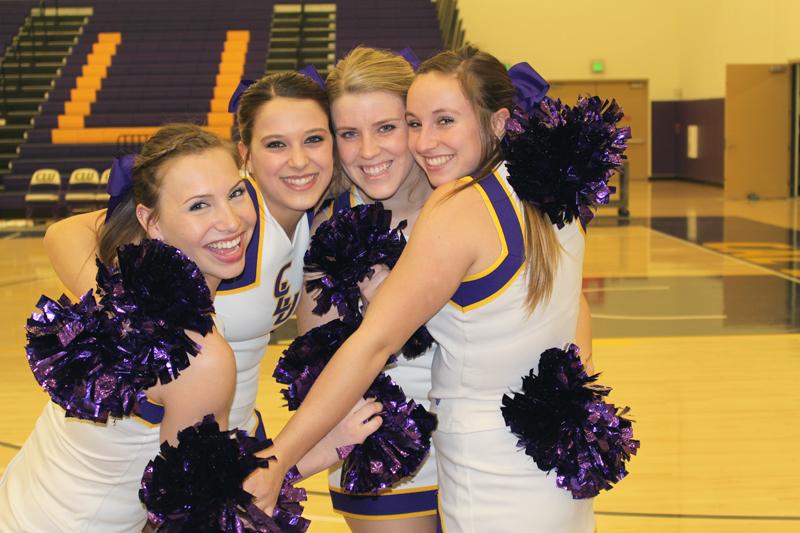 Cheering their way to greatness: Cheerleaders Tiffany Caprine, Tori Morris, Jordyn Niblack and Kendra Lewin represented CLU when they were featured in a Chrysler car commercial that aired during the Superbowl. The quartet hopes to cheer for all campus sports, bringing students school spirit year round. Photos by Anna Coulson- Staff Photographer

Ready…OK.
With their recent participation in Chrysler’s Super Bowl advertisement, California Lutheran University’s cheer squad has drummed up a lot of chatter around campus.

“We went down to LA for our audition and we were in a room full of other cheer squads, including big name schools like USC. We got a call back and after we had landed the commercial, they picked three or four of us who were featured. It was such a fun opportunity,” senior cheer squad member Tori Morris said.

Participating in the advertisement came with all new exciting challenges for the members of the squad.

“Usually, we do stunts with four girls on the bottom, but they didn’t have the budget for a fourth, so we had to do all of our stunts with three on the bottom. That was kind of scary because we had never done that before” Morris said.

Although they have gained recognition for their Chrysler add cameo, the squad is hoping to move toward a more serious role on campus.

“It’s a bit of a sore subject. I think that if we had more funding to be able to train and become a better team we could be seen and treated as an athletic team, but right now, I just think that we have great talent, but we don’t have the resources to take it to the next level,” Morris said. “If we had funding and the ability to recruit like the rest of the athletic teams, I think that we would be more respected on campus.”

Not all of their hard work goes unrecognized.

“The cheer team gives us a lot of support and they help keep the crowd engaged in our game,” said junior Natalie Stone, women’s basketball captain.

“The cheerleaders are kind of like unsung heroes. While many people make jokes or debate that cheerleading is not a sport, their role in getting the crowd loud and pumped is huge,” Worthley said.

While the cheer squad currently only participates in football, basketball and NCAA playoffs, it hopes to expand to all campus sporting events.
Despite the lack of funding, the cheer squad still makes an impact, not only on the crowd and athletic participants, but on each other.
“Being a part of cheer has given me the opportunity to be a part of so much at Cal Lu. The dynamic of the team is different this year and there have been many transitions, but I believe it has bonded us more as a team and strengthened our program,” senior cheer captain Tayler Schreiner said. “The goal of our team as a whole is to continue to gain respect from the student body and staff and to bring school spirit to our campus.”

Let’s show support for those who spread spirit throughout the campus and strive to do greater in the face of adversity.

Have you thanked a cheerleader today?