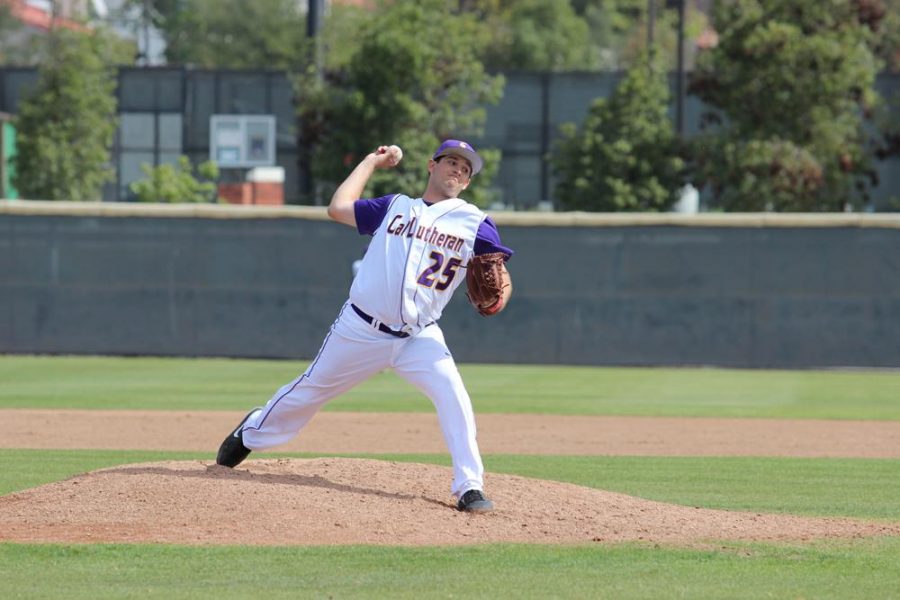 No offense needed: In the closest and lowest scoring game of the series against Pomona-Pitzer, Tyler Hebda threw 7 innings of shutout baseball en route to a 3-0 victory in Game 2 on Feb. 22 at Ullman Stadium. Photo by Isabella Del Mese - Staff Photographer

For the first time in more than five years, California Lutheran University’s Kingsmen baseball team swept the Pomona-Pitzer Sagehens in a three-game series from Feb. 21-22.

The first of the three games, which also served as the opener for the SCIAC season, was the best offensive game for both teams and it ended with a 19-15 victory for the visiting Kingsmen. The game was called in the eighth inning due to darkness, but not before sophomore Justin Caña drove in four runs for the Kingsmen with a grand slam in the top of the eighth.

Sophomore Ramsey Abushahla and senior Nicho DellaValle both hit home runs in the fourth inning, regaining the lead for the Kingsmen who trailed the Sagehens 6-3 earlier on.

“It is always great to help out the team in any way possible,” said DellaValle of his home run. The Kingsmen ranked as the top Division III team in both batting average and runs per game by the NCAA last season. Despite a strong offensive record, DellaValle said that the team, “can always improve, which is why we will continue to work hard with a national championship in mind.”

Despite the Kingsmen’s otherwise smooth ride to victory, there were some minor bumps in the road. Several calls by the umpire received outraged responses from coaches, teammates and fans, alike.

“A major part of pitching is understanding that umpires are human and make mistakes. Some umpires don’t admit their faults and being able to manage and adapt to each unique umpire challenges the most veteran of pitchers,” said senior pitcher Jake Petersen, who got the start on Feb. 22.

The Kingsmen returned home to George “Sparky” Anderson Field at Ullman Stadium to compete in a double-header against the Sagehens on Feb. 22. Petersen mirrored the previous day’s domination with a strong double early in the first inning, driving in Caña and scoring the Kingsmen’s first RBI of the game.

Yet, a second win for the Kingsmen proved more challenging than the first. In what Pomona-Pitzer reports are dubbing a “pitcher’s duel,” the Sagehens fought back with freshman pitcher Lane Miles, who prevented the Kingsmen from scoring for five consecutive innings.

The “duel” was initiated when Kingsmen senior pitcher Tyler Hebda took the pitcher’s mound. With the Kingsmen barely holding on to a slim one-run lead, Hebda managed to stave off the Sagehens by pitching a seven-inning shutout. Junior Collin Crowl added some insurance in the eighth inning when he hit a single, scoring two runners and sealing the second win over the Sagehens by a final score of 3-0.

With two wins under their caps, the Kingsmen took the Sagehens to task, setting the tone of the rest of the game by securing an early lead over the Sagehens in the first inning. Then, with bases loaded, sophomore Davey Casciola continued the momentum and hit his first career home run. Casciola’s grand slam gave CLU an early 6-0 lead.

The Sagehens didn’t go away, as they hadn’t all series. Pomona cut the lead a third in the fourth inning by scoring three runs off junior pitcher and game-three starter Scott Peters.

But, the Kingsmen answered back with two more runs in the bottom of the inning, making the future look bleak for the Sagehens, who found themselves behind 11-3.

Recovering from earlier bullpen struggles, Kingsmen sophomore pitcher Mitchell Shields managed to prevent the Sagehens from scoring at all in the seventh inning. Despite Sagehen sophomore Simon Rosenbaum’s eighth-inning single, which brought the score to 12-5, the Kingsmen maintained the lead. Freshman outfielder Gabriel Gunter concluded the game by hitting a three-run home run in the bottom of the eighth inning. CLU mercy-ruled its Pomona-Pitzer rivals by a final score of 15-5.

It is impossible to tell whether these early victories for the Kingsmen are any indicator of future wins. Yet, Petersen believes that with the Kingsmen’s successes last season, the lessons that brought them together as a team will be renewed again this season.

The Kingsmen will travel to Chapman on Feb. 28 and return home March 1 for a double-header with the Panthers and then host Whitworth University (Wash.) on March 2 at 12 p.m.