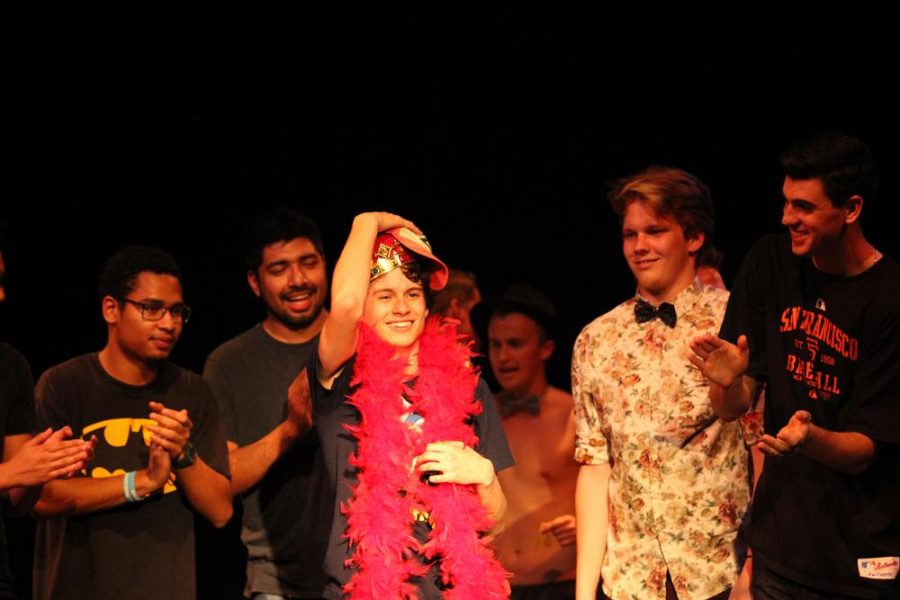 California Lutheran University students chose who they thought were the most superpowerful men on campus to compete in the Club Lu male pageant, Mr. Kingsmen, on Feb. 21 in the Preus-Brandt Forum.

The annual event had a superhero theme, and from 7-11 p.m., the forum was filled to capacity with attendees who came to see a heroic battle of biceps, brilliance and beauty.

In order to be crowned Mr. Kingsmen, the contestants had to compete in three stages. The first was parading out in their best superhero attire. The second was a talent portion and the third was a playing of the Newlywed game with their escorts. The night was finished with a grand finale dance number choreographed by  junior contestant Graham Jameson Jr., who personified the BBC’s Dr. Who.

Students nominated Mr. Kingsmen contestants by casting ballots into a glass bowl at the flagpole from Jan. 20-24, according to sophomore Programs Board Representative Laurel Skinner. There is one Kingsmen from the freshmen class, two from the sophomore class, three from the junior class and four from the senior class.

“Entertaining, uplifting and humorous are how I would describe Mr. Kingsmen, it is definitely one of the highlights of the year,” said senior Joette Carini.

“I think that Mr. Kingsmen is so much more than a few carefully selected adjectives can describe. In fact, it is beyond what words could describe,” said senior Ashton Williams.

The Mr. Kingsmen superheroes also included  junior Carlos Moran, who dressed up as his childhood hero, his father, and caught grapes in his mouth on a longboard for the talent portion of the contest.

Senior David Stenson dressed as Thor, the god of thunder and sang “Let it Go” from the movie “Frozen.”

Throughout the contest there were raffles of items from superhero socks, movie tickets, to a $100 Nike gift card. ASCLUG encouraged the audience to participate by texting hosts, seniors Shakivla Todd and Vim Iglesia, the answer to the question, “If you were a superhero, who would you be?” The host read the audience’s answers out loud throughout the night while the contestants prepared for the next portion of the event.

The audience was enthusiastic and cheered whenever a new stage of the competition began.  At one point in the program, the hosts had to tell the audience to quiet down so the program could proceed.

“I hope that the walls of the forum are soundproof so that the students in the library trying to study were not too distracted by how loud we were throughout the program,” Lesley Daly said.

After the finale, the crowd was asked “Who is your favorite Kingsmen?” The audience texted in a six-digit code to vote for their favorite superhero. Gibson, who performed a dance number in a speedo for the talent portion, placed in third. The second pace winner was senior Andre Andoyan who portrayed Mermaid Man from the Spongebob Squarepants series.  For his talent, he took the crowd on what he called “a lyrical adventure” and told a series of funny stories.

Monsibay dressed as his childhood hero, Ash Ketchum from the Pokemon series.  Monsibay asked for a volunteer from the audience during the talent portion and improvised a song using  three adjectives, fun, flexible and beautiful, that were suggested to him by the crowd.

“I didn’t plan or rehearse my talent portion at all, I’m on the improv troupe. It’s just what I do,” Monsibay said.

Carini reflects on her past experiences with Mr. Kingsmen.

“Mr. Kingsmen is one of the best traditions we have here at CLU,” Carini said. “Each contest is really unique and hilarious in their own way.”