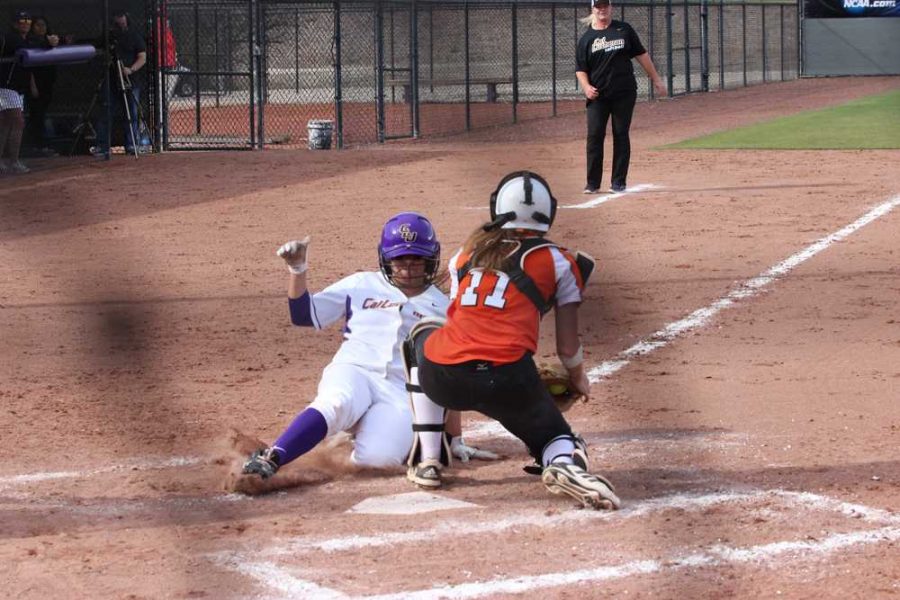 On March 8, California Lutheran University’s Regals softball showed that they were ready to spring forward not only for Daylight Savings, but in their season as well. The team’s games last weekend were rained out, but the Regals came back fighting, winning both of their games this past weekend.

The Regals had a four game losing streak but were undefeated in SCIAC going into the games.

CLU started off its first game against Occidental slowly, but was able to get two runs in the bottom of the third inning. Danika Green was hit by a pitch, which allowed for a run to be scored.

As the game continued, Occidental was able to score a run in the fifth inning, but CLU kept them at bay for the rest of the game. This was CLU’s fifth win in the SCIAC, bringing them to 5-0.

Attitudes were optimistic going into the second game.

“I’m really looking forward to the second game because I think we are going to step it up there,” said junior first baseman Christina Hunter.

The players had the chance to talk before the game about things to improve on. According to Hunter, the pitchers from Occidental were throwing their pitches slower than CLU is used to.

“We really need to stay on our feet. The pitching is hard to adjust to,” Hunter said.

As well as some slower pitches, the wind was a factor for these games. The top wind speed was 20 mph, which can affect how players from both teams perform.

However, the wind did not seem to stop the winning streak for CLU. The Regals started off hot and took a three run lead in the bottom of the first inning, added one in the second and one more in the third after Occidental scored two in the top of the inning.

The Regals stuck the dagger in and scored six additional runs in the fourth, mercy ruling the Tigers after they weren’t able to put a run across in the top of the fifth.

In college fast pitch softball, if a team is up by more than eight runs at the end of the fifth inning, the game is over, which is what happened for this game. This “mercy rule” ended the game in favor of CLU with a final score of 11-2, and a SCIAC record of 6-0.

Although these two wins went a long way for the Regals, this next week will be a challenge for them.

“We are sitting really good but this next week is going to dictate a lot, we play Claremont, Chapman and Whittier who is also undefeated in conference,” said junior second baseman Ryanna Morua.

Debby Day, the head coach for CLU women’s softball also feels that this next week will be crucial for their season and that they are ready for any challenge.

“We are feeling pretty good and we are getting better every time we play. I think we are ready to take on some of the big teams which will give us a good feeling of where we really are… games are games and they all matter,” Day said.