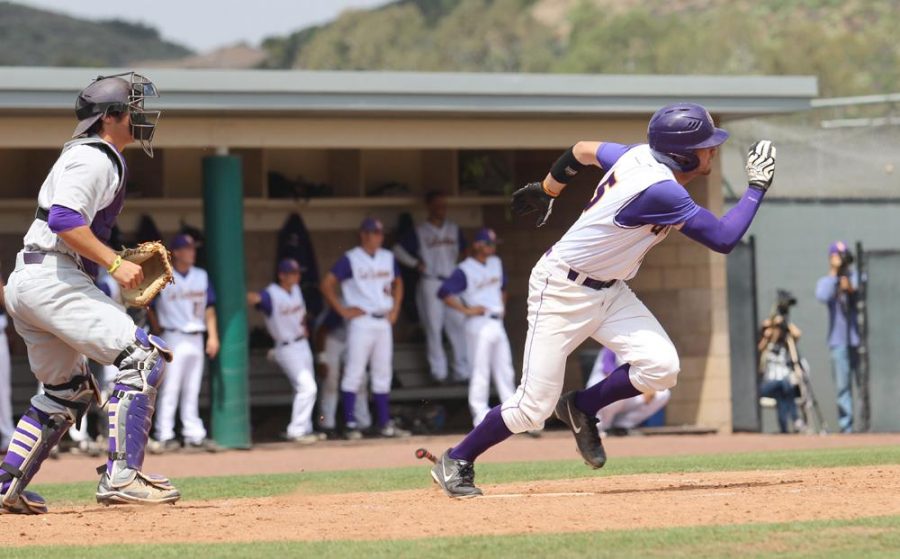 Playing their part: Nicho DellaValle went 4-13 this past weekend including a game-tying home run in the bottom of the ninth in Game 2. Trey Saito came on in relief in Game 2 throwing three shutout innings and striking out two. Photos by Courtney Nunez - Staff Photographer

California Lutheran University and Whittier College battled for first place in SCIAC this weekend. All three games were tightly contested but CLU lost the series to Whittier for the first time in school history.

Although the Kingsmen out-hit the Poets in game one, the long ball hurt CLU as senior pitcher Jake Petersen gave up two home runs to Julian Brazilli and Ben Cerami. That was the difference as the Kingsmen lost 4-2 on April 11.

CLU fought in extra innings in game two, which was the first game of the double header on April 12 but ultimately lost 7-5. The Kingsmen came back to win the second game 14-6 with a 12-run rally in the bottom of the seventh inning.

The senior class of 2014 was recognized Saturday. Seniors Petersen, Craig Jacobson, Nicho DellaValle, Tyler Hebda and Aaron Roth were recognized, congratulated and thanked for their contributions to the baseball program and athletic departments.

The first game on Saturday was scoreless until the top of the fourth inning when CLU’s pitching fell apart and Whittier scored five runs. The Kingsmen came back with a four-run rally and then tied it up with a solo home run from DellaValle in the bottom of the ninth. But two solo home runs from Whittier in the top of the 10th led to the painful loss for CLU.

Kiyabu also threw a wild pitch and allowed a single. Freshman pitcher Trey Saito came in to relieve Kiyabu and forced a pop fly to sophomore outfielder Justin Caña for the third out.

“We were good to start. We got two outs and then we couldn’t put them away,” said Assistant Coach Peter Schmitt.

“Our pitching couldn’t really find the strike zone,” Caña said. “It was early in the game and we knew we had a lot of game left. We wanted to get the next guy up because good things happen.”

In the bottom of the fifth, Petersen lead off with a single and Davey Casciola walked, which was followed by a two-run double from Collin Crowl. CLU was finally on the board with two runs. Nathaniel Thompson walked and a single from Gabe Gunter followed by a Poets error, scored Crowl. Chris Whitmer hit Thompson in, bringing the Kingsmen within one run.

“We just had a mental lapse. Our pitching struggled a little but we came back,” Saito said. “We gotta play Kingsmen baseball, all heart one through nine innings.”

Roth (3-2) took the loss after allowing the two home runs in extra innings and Cerami (3-0) gained the win.

“We gotta bring out the intensity,” Caña said.

“Everybody as a whole is struggling. We just have to get back to what we were doing early on in the season when everyone was doing little things better and nobody was trying to be the hero,” Schmitt said.

Whittier also gained the lead early on in the second game with a two-run double from Stephen Zavala in the third inning. CLU scored a run in the fourth and fifth innings, tying the game 2-2. But six hits, four runs and two CLU errors later, Whittier was back in the lead in the top of the seventh.

Junior pitcher Scott Peters was pulled from the game in the top of the seventh after five consecutive hits and Kiyabu came in facing just one hitter and ending the inning with a fielder’s choice.

In the bottom of the seventh, CLU combined for 12 hits and 12 runs with every player collecting at least one. Ramsey Abushahla had a three-run home run, scoring the winning run.

Including both games, Crowl went 4-for-9 with three doubles and four RBIs. Petersen had four hits, DellaValle had four hits as well and Caña went a 5-for-9 with two runs and two RBIs. DellaValle, Petersen and Dubois each scored three times. DuBois and Casciola each walked twice and DuBois stole the only base of the day.

“At this point, just getting into the conference tournament is the goal, being in the top 4. But, there’s a lot of games left,” Schmitt said.
CLU (23-8, 15-6) will look to tie up the season series with Whittier today as it travels there for a makeup game. The Kingsmen will play their final regular season series this weekend, which starts on April 18 at home against La Verne at 3 p.m.