Keeping their eye on the prize 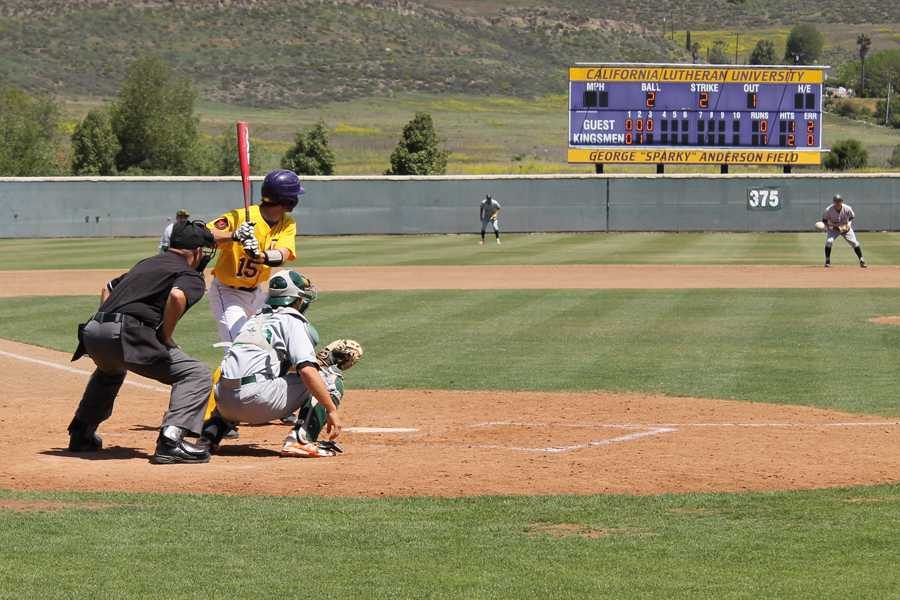 Not done yet: Because the SCIAC tournament was implemented last season, Nicho DellaValle (above) and the Kingsmen did not earn an automatic bid into the NCAA tournament with their regular season title. A tournament championship is what CLU must win to get that bid. Photo by Areli Diaz - Staff Photographer

All hail Kingsmen baseball as they clean up the conference. After a double header on April 27 versus both La Verne and Cal Tech, as well as two other victories against Claremont and Redlands earlier in the week, California Lutheran University secured itself the regular season SCIAC championship for the second year in a row. With a great showing against La Verne, CLU notched out a win 10-5. Having a stellar third inning with five runs, the Kingsmen leapt ahead of the Leopards 6 runs to La Verne’s 0. Junior pitcher Scott Peters threw strong early innings and later in the game, sophomore pitcher Landry Kiyabu and senior Aaron Roth kept the Leopards at bay the rest of the way.

The defense was not lax during CLU’s faceoff against the Leopards. With great effort, the defense managed to not commit any errors in both games. Ultimately the Kingsmen closed out the game with 10 runs to La Verne’s five. Head coach Marty Slimak was proud of the efforts the team put forth.

“We felt that this week was really going to dictate how we were going to play, and I told the guys that we still have some games left in this conference. Nothing is for sure, nothing is over, and I told them that they obviously have to come and play every game like it could be your last and that is how we approached this. It was good for the guys,” Slimak said.

While La Verne forced CLU to break a sweat, it was smooth sailing when it came to their matchup against Cal Tech. The game went only seven innings with a score of 16-0. Freshman pitcher Trey Saito started for the Kingsmen and made quick work of the Beavers in the first inning.

In the bottom half of the first, sophomore Ramsey Abushahla got the Kingsmen on the board first following a walk with the bases loaded.

Following more walks and timely hits, the Kingsmen were sitting on a comfortable lead, 7-0, at the end of the inning. Sophomore Atherton Kniseley stepped up to bat later in the game and knocked the ball out of the park asserting CLU’s dominance with a 13-0 lead. Junior catcher Chris Whitmer got in on the action when he smacked another homer over the wall to allow the final score to stand at 16-0.

With five separate pitchers getting to see the mound it’s clear that Kingsmen baseball is stacked from one end of the bench to the other. Slimak was proud of the unified effort of the team.

“I think it was a very good team effort. The team was very intense and competed in all of the big situations. When we’re competitive and come with that intense edge we should be just fine [heading into postseason play],” Slimak said.

Kniseley attributed his success this weekend to his teammates.

“I think the team’s dedication during practices helps us when we finally reach game days like these. I’m excited to continue to play with these guys heading into postseason,” Kniseley said. “It [the homerun] felt pretty good.”

Whitmer is already looking towards the future.

“I’m happy that we will be hosting the postseason tournament. We have arguably the best field and it’s great to have the school’s support,” Whitmer said.

The SCIAC postseason tournament begins May 2 and CLU will be the host. Only four teams from the conference make the tournament with the winner earning an automatic bid into the NCAA DIII baseball tournament. The Kingsmen will play Occidental, who they are 2-1 against this season, while Chapman and Whittier will face off in the other first round matchup. It is a double elimination tournament and the winner will be crowned at George “Sparky” Anderson Field at Ullman Stadium on May 4.