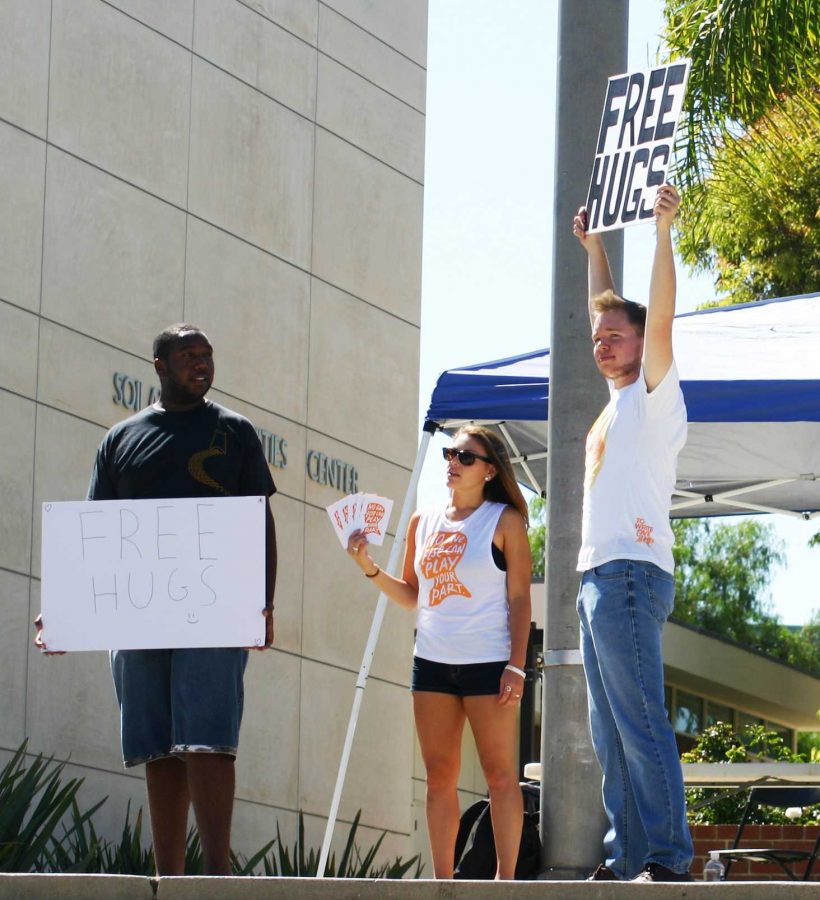 At 63-years-old, Robin Williams, beloved actor, father and husband died on Aug. 12 due to suicide. Williams was known for his comedic personality; he constantly brought laughter to his fans throughout his career as an actor and comedian. William’s viewers were stunned by the news of his death because of the personality he put forward. No one ever suspected him to be suicidal.

Sept. 10 was the National World Suicide Prevention Day created by the International Association for Suicide Prevention. IASP asked those all around the world to take a moment at 8:00 p.m. and light a candle near a window in respect for those that have been affected, died or survived suicidal attempts.

“It was such a humbling experience when I realized that something as small as a hug can really make someone’s day. It made my day just by having the opportunity to put a smile on so may different people’s face,” said junior Nolan Forghani.

Near the flagpole from 8:00 a.m. to 3:00 p.m. students voluntarily stood around to give anyone a hug in the attempt of changing someone’s day from bad to better or good to great.

“I volunteered for free hugs today because I love giving hugs and I want to get a smile from the people that I hug,” CLU senior, Carlos Moran said.

Andy Hanson who works for Residence life and Student Conduct Office on campus and voluntarily took this day off, as he has multiple times before to be there to better promote the seriousness of National World Suicide Prevention Day.

“There is no telling the impact you can have in this life by continually giving of yourself. I hope we positively impact as many people as possible,” Hanson said.

Suicide kills 40,000 Americans each year, which is two times more lives than HIV/AIDS takes according to Suicide Awareness Voices of Education, SAVE. Fifteen percent of people that are affected by depression will die from suicide according to SAVE. Depression affects how people feel, behave and think by taking control of their emotions and physical issues. The majority of American’s that are clinically depressed seek psychological help, but for those that do not become more prone to suicide.

It can be difficult to understand the pain that one is feeling that makes them suicidal, but if signs show that they are suicidal, there are ways to prevent it from happening and helping someone get the advice and attention they need. Suicide is an escape for people, it becomes the only way they understand their ability to stop hurting, although they may not truly want to die, they cannot seem to locate an alternative decision.

When concerened about someone that may be at risk of suicide, common signs are: the discussion of wanting to die, feeling hopeless, increase in alchohol or drug intake, sleeping more than ususal, withdrawal, rage and massive mood swings.

Preventing suicide is possible if people take action when they notice the most common signs, If you or a friend needs advice, help, or you have questions, you can call the National Hopeline Network at (808)SUICIDE(784-2433)Hanson also mentioned students of CLU can also contact Student Counseling at (805) 493-3727.