‘Remembering the past, honoring the memories’ 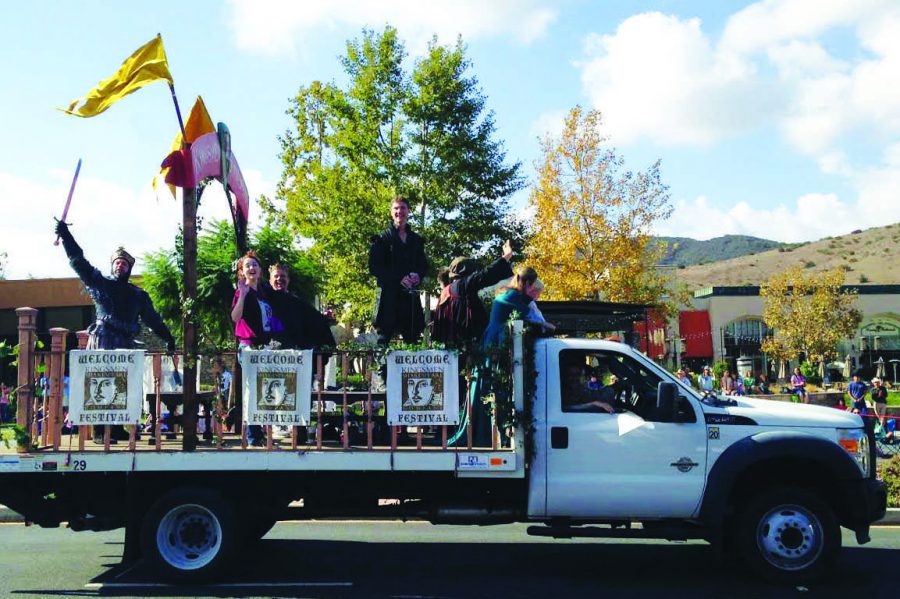 Reppin’ Cal Lutheran: The Kingsmen Shakespeare theatre company was one of the many participants representing Cal Lutheran at the parade. Photo courtesy of Erik Diaz

On Sept. 27 the Thousand Oaks Parade Committee hosted the city’s 50th anniversary parade that started at 9 a.m. in Thousand Oaks.

According to conejoarts.org, the theme of the parade was “Remembering the past, honoring the memories.” The entries in the parade were meant to represent life 50 years ago when Thousand Oaks was founded in 1964.

“Thousand Oaks is a very special place, a place where we live, work and play. A place we call home. This parade was by the community for the community,” committee chair member John Short said on the website.

“I think the parade was a great success. A lot of effort went into putting this parade on and it was wonderful to have the community come out to enjoy it. It was also the first parade the city’s had in a number of years and I think the event and participation will continue to grow if it’s held annually,” Guy said.

The 50th anniversary parade was the city’s first parade in more than eight years and was 50 percent bigger than any parade previously held in Thousand Oaks according to Guy.

According to the website, the 1.5 mile long parade down Thousand Oaks Boulevard started at Dusenburg Drive and ended at Erbes Road. There were many different parade attractions such as three local high school marching bands, 23 floats, 134 antique cars, 15 former Thousand Oaks mayors and three inaugural members of the Thousand Oaks Police Department.

The parade started off with five Chevy Camaros leading the way which represented the World Trade Center Tower 1, Tower 2, The Pentagon, Pennsylvania and the first responders. They were in memory of the lives lost on Sept. 11, 2001.

California Lutheran University was one of the many sponsors to help with the parade. Cal Lutheran was represented in the parade by the university’s cheerleaders and many different athletic teams and clubs.

“It was really cool seeing so many different members of the community come together for one event. Thousand Oaks is a great community, and it was fun interacting with the people who attended the event. I felt really proud representing Cal Lutheran and the softball team,” Cal Lutheran softball player Blake Lewis said.

According to the website, immediately following the parade, those attending were invited to set a Guinness World Record for the world’s longest LEGO chain. Rotary Dreamcatcher, a non-profit organization, brought this idea to the community to raise awareness and money for a playground for children with special needs.

The LEGO chain was not the only activity after the parade. Three Rivers Band had a concert at The Lakes to celebrate the 50th anniversary of Thousand Oaks as well. The concert went from 11:30 a.m. to 3 p.m. on Thousand Oaks Blvd.