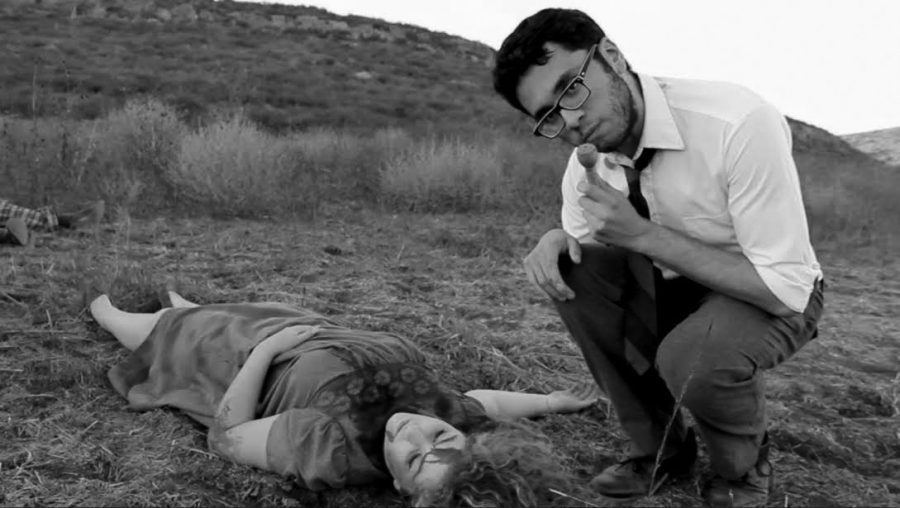 Dead or alive: TV reporter Bill Bardough (Mario Gonzales) leans in for a closeup over a dead zombie (Christine Dauzat) in ‘Night of the Living Dead’ playing October 23-26 in the Black Box Theatre. Photo courtesy of Kenneth Gardner

As a space probe was returning from its expedition of Venus, it mysteriously exploded releasing radiation into the atmosphere. The radiation caused the dead to come back to life as flesh-eating zombies in a destructive rampage.

In a world submerged in cannibalism and bloodlust seven strangers are trapped in a sequestered farmhouse struggling with the horror that awaits them outside and the tension that will eventually destroy them on the inside.

The play zeros in on the bonds among seven unfortunate strangers who may quite possibly be the living dead themselves.

“Romero’s film was really the first movie of its kind to do the slow moving flesh eating zombies. It was derived on realistic fears from society at the time it was made,” Oram said. “Our goal is to deliver the same intensity and have the audience on the edge of their seats all night.”

“Night of The Living Dead” is the ultimate zombie horror film that entrenched the modern day mythology of the zombie craze. In Romero’s cinematic masterpiece, these creatures of destruction come back to life to feed on the flesh of the living.

They serve no one, but the sole inclination that drives their behaviors.

“We wanted to host the play in the Black Box to create a more intimate setting to make the threat of the zombies more realistic and present,” Oram said.

The play is set in an old dilapidated farmhouse that has been re-created and designed by senior Sarah McKee.

“We didn’t want to build a typical farmhouse but something more abstract,” McKee said. “The most unnerving thing is that you can see what is going on outside, you can see the enemy, you can see the danger that is coming for the actors, it gives this great energy of a spooky torn down farmhouse. Between the special effects, lighting and the costuming it is bound to be an eerie night.”

The costuming was done by sophomores Brooke Kesler and Emilia Covault. The goal according to Najera, was to try and keep the grittiness of the black and white film by using more muted and washed out colors for costuming to help drive the fear into the audience.

“The play is set in the late 1960’s so that was the inspiration for costumes. We wanted to keep the costuming as consistent as possible with the original movie,” Kesler said. “It’s going to be a pretty gory show. I’ve been working a lot with Uriel, who is doing the makeup design, to make the blood pop and make sure the lighting and special effects work as they are supposed to in order to accentuate the costuming.”

The lighting is done by senior Will Cowles-Meyer, master electrician and lighting designer. According to Cowles-Meyer this is the first contemporary piece the theater department has produced.

“‘Night of the Living Dead’ is a bold undertaking from the designers standpoints and is unlike anything we have ever done,” Cowles-Meyer said. “I like to aim more towards the darker side, less is more when it comes to this. We have a lot of fog and different colors to portray the emotion. The design has required a lot of collaboration. I have worked a lot with everyone, especially on the score making sure the moments of tensions are timed just right.”

According to Oram this is the first time the theater department has reached out to the music department for the score of a production. Senior Abhi Sridharan Vaidehi, a production major, is creating the score with sound design and effects by junior Angie Zamora.

“Since it is ‘Night of the Living Dead’ the score is not overly dramatic, it is more like ‘The Dark Knight’ or ‘Inception.’ It is a contemporary play,” Sridharan Vaidehi said. “Most of the score is just creepy and eerie sounds to make the audience feel uncomfortable and to create the psychological horror.”

‘Night of the Living Dead’ is an accolade to all the components that make this classic film so captivating by honoring the history and influence of the original movie.

“The one thing Romero didn’t do when producing the movie was that he didn’t copy write the script so we are actually doing an exact rendition of the movie just adapting it for the set,” Najera said.

The characters all face different issues and challenges while desperately trying to live through the night.

Their conflicting personalities and personal agendas seem to keep the group from working together, which leaves the audience with the question, could anyone possibly survive a night of the living dead?

“We really get to play with the emergence into this world and emotion that comes along with a horror play like this one,” Najera said. “We have really been fighting to create a realistic world to give Cal Lutheran a night of pure thrill.”

If you can stand pure psychological terror, then proceed to the Blackbox Theatre for the remarkable power of “Night of the Living Dead” on Oct. 23 – 26 at 8 p.m. and a bonus show on Saturday, Oct. 25 at 11 p.m.