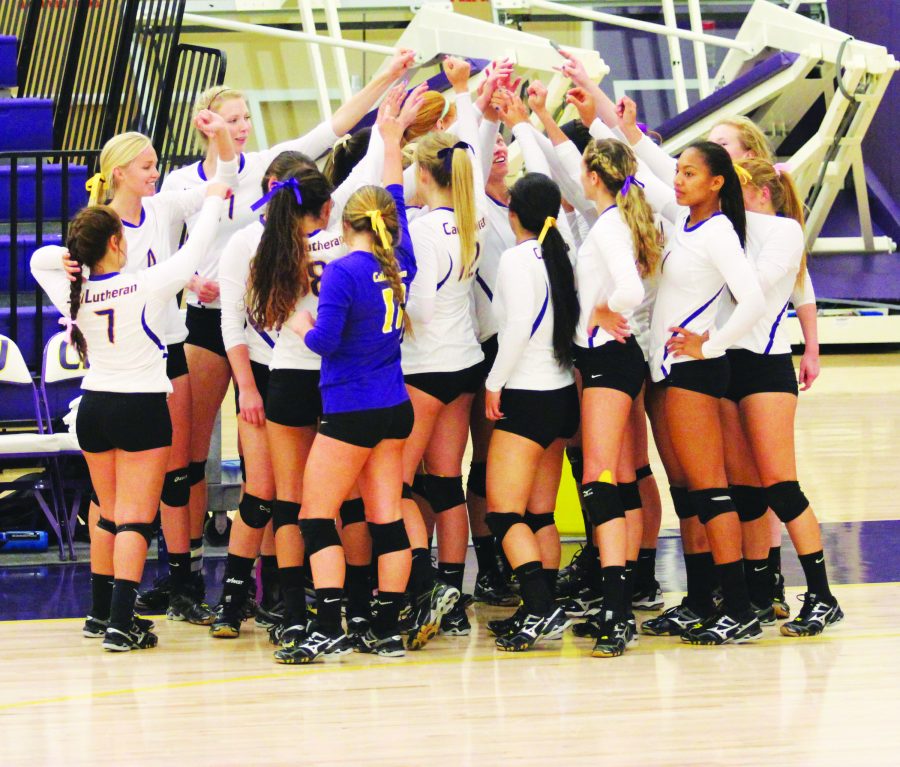 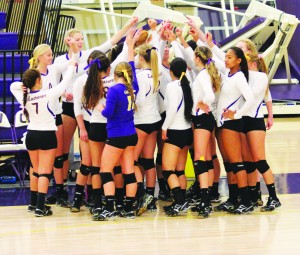 Bittersweet was one word to describe senior night for the California Lutheran University Regals volleyball team. It was sweet for the Regals because they clinched their fifth straight Southern California Intercollegiate Athletic Conference championship, but bitter in that four seniors played their last regular season game of their collegiate careers.

The Regals finished their regular season in SCIAC with 15 wins and just one loss.

The first set victory did not come easy for the Regals. Sophomore libero Nicki Tetherow made some crucial saves and passes to help the Regals win the first set. As for Tetherow’s expectations coming into the game, she just wanted to win it all for the four seniors, right side hitter Hannah Orlandi, setter Jena Chavez, setter Kennedy Peters and defensive specialist Lindsey Kuramoto.

“I just wanted to play for our seniors, and win SCIAC for the fifth year in a row,” Tetherow said. “I’m going to miss the presence of the seniors and their positivity and leadership that they bring to the court.”

The second set took some time to develop a lead for the Regals, but after Chavez made a huge save in the 14th point to build the lead 8-6 the momentum began. The Regals were able to shut down the Poets with consecutive kills and end the set 25-13.

The third and final set of the night was huge for Orlandi after she made two kills in a row to increase the lead to 21-18 for the Regals. The set came to an end with the Poets missing the game point serve, making the Regals this year’s SCIAC champs.

Leading the way for the Regals was junior outside hitter Allie Eason with 15 kills. Sophomore outside hitter Michelle Lawrence added eight kills of her own while setters Peters and Chavez had 18 and 15 assists, respectively.

After the win, Orlandi was excited to celebrate the last regular season victory at home with her family and friends even though it did not completely set in right away.

“[My last regular season home game] hasn’t really hit me yet, but I’m sure it will eventually. It was an exciting day today having everyone here; family and friends coming out was an awesome feeling,” Orlandi said.

Orlandi experienced and learned a lot playing for the Regals these past four years and she’ll definitely miss it once it all comes to an end.

“Togetherness, it’s all about the team. Just playing together, playing for each other, loving the game and loving each other is the biggest thing,” Orlandi said. “I’ll miss the team, the off the court stuff, the competitive practices and just being able to see everyone everyday.”

The team is known for their chemistry on and off the court, with the way they play and the way they believe in each other.

Head coach Kellee Roesel has been at the helm of all five SCIAC championship teams.

“I think it’s just a real tribute to our returners. They set the tone,” Roesel said. “We lost four amazing kids last year, four All-Americans, and for them to come in the week after we lost last year and say ‘we’re going right back in and doing the same thing’ and winning it next year shows their dedication.”

The third-ranked Regals according to the American Volleyball Coaches Association continue their road to the NCAA National Championships and next up for them is the SCIAC tournament, which will be hosted at Cal Lutheran in Gilbert Arena. The Regals will take on Pomona-Pitzer in the semifinal match on Nov. 6.

The winners of both semifinal matches will meet on Nov. 8 to play for the SCIAC postseason tournament title and an automatic berth into an NCAA Regional match.