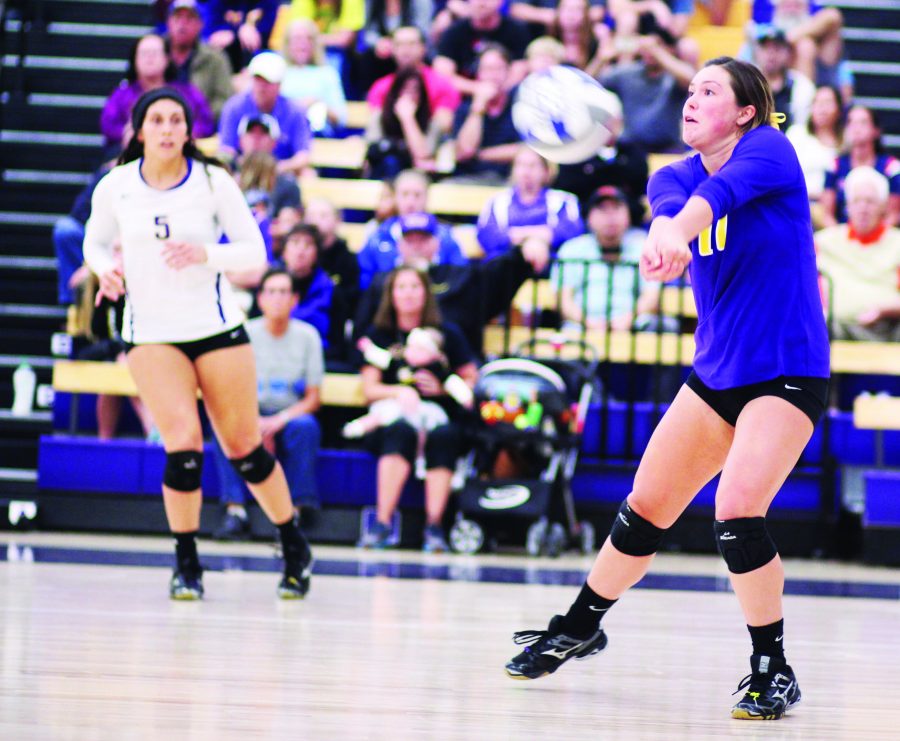 Sophomore libero Nicki Tetherow looks to bump the ball to a teammate.

The last time the California Lutheran University volleyball team faced off against Claremont-Mudd-Scripps it came up a bit short in a five set thriller. But this time with the Southern California Intercollegiate Athletic Conference championship up for grabs the Regals were able to sweep the Athenas and claim their third straight SCIAC tournament championship.

The Regals came into the tournament as the top seed after making it through their conference schedule with a record of 15 wins and one loss. On Nov. 7 they began the tournament by facing off against Pomona-Pitzer in a semifinal matchup.

“Our mindset was that they were in our house now and we wanted to protect our home and play Cal Lu volleyball and play at our pace,” said sophomore middle blocker Monica Lundgren.

As the match begun the action was back and forth as the Regals raced out to an early lead only to have the Sagehens battle back and take a lead in the early stages of the first set. Sophomore outside hitter Michelle Lawrence and junior outside hitter Allie Eason were able to lead the Regals through that first set with Lawrence eventually putting the Regals ahead for good. The Regals won the set 25-21.

After the first set the Sagehens weren’t able to come very close and the Regals claimed the last two sets without much of a struggle. The Regals won the next two sets by scores of 25-19 and 25-14.

It was a balanced effort that led to the semifinal sweep with Lawrence leading the way with 14 kills, Eason with 12, and sophomore middle blocker Sarah Pappas with 10 kills on the night. Eason also had 12 digs while sophomore libero Nicki Tetherow contributed 11 digs.

The effort against Pomona set up the rematch against Claremont-Mudd-Scripps with not only the SCIAC championship up for grabs but also an automatic bid for the NCAA tournament on the line.

The Regals came out of the gates strong as they claimed the first set against the Athenas who are ranked No. 18 in the nation for Division III according to the American Volleyball Coaches Association.

It seemed as if the tide had turned during the second set as the Athenas led for the majority of it but the Regals were able to come back and win off of a CMS error.

With the match on the line both teams were leaving it all on the court with neither team being able to gain much of an advantage.

Senior right side hitter Hannah Orlandi and Eason were able to make some key plays to put the Regals ahead and they didn’t turn back. Lawrence had the match clinching kill and the celebration was on in the Gilbert Sports and Fitness Center.

With this victory the Regals have claimed not only their third straight conference championship but have also punched their ticket to the NCAA tournament.

Last year the Regals made it all the way to the NCAA championship match and the team believes they can have the same kind of success this year.

“For us to have another successful NCAA tournament we are going to have to keep pushing each other in practices, keep believing in each other as a team and keep enjoying every moment we get to play,” Lundgren said.