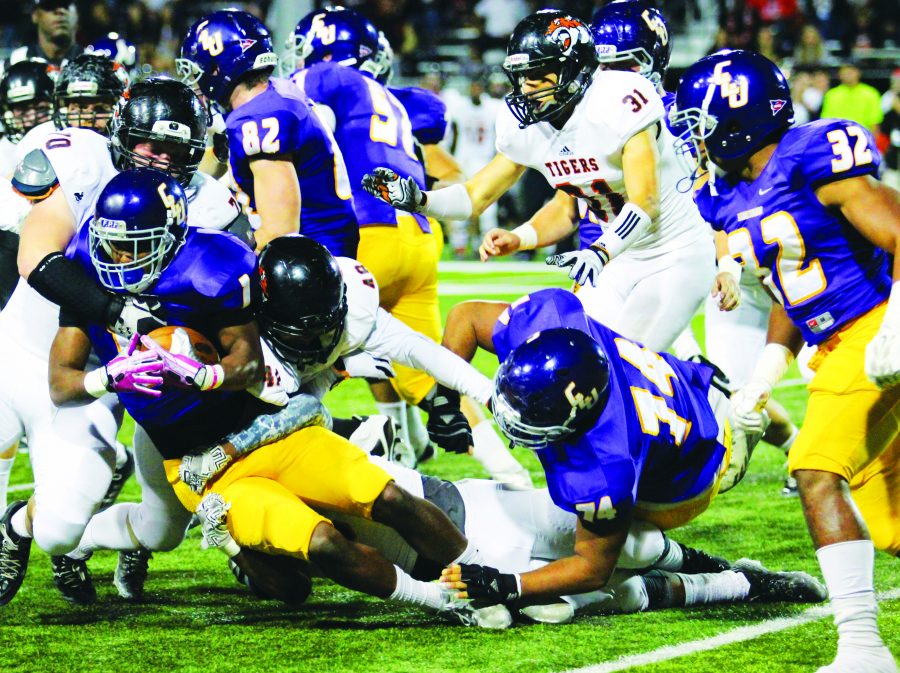 In a busy day for California Lutheran University athletics, the Kingsmen football team ended the night with a 49-39 victory against Occidental College.

Coming into the game, Occidental had a conference record of 4-1. The Kingsmen, who entered at 2-3, finally got the win they were striving for against a team with a winning record.

“It was a great team win, with everyone stepping up and making plays, guys making plays left and right and really coming together as a family,” junior wide receiver Andrew Worthley said.

“The effort of the team was excellent. We played very hard,” Defensive Coordinator Scott Beattie said in an email interview.

Occidental scored the first touchdown of the night on a 20-yard pass, just over four minutes into the first quarter.

The Kingsmen answered back with a touchdown of their own when Isham threw an eight-yard pass to junior wide receiver Sean Bellotti. After a successful extra point from sophomore kicker Diego Marquez, the score was left tied at 7-7 with just under seven minutes left in the first quarter.

With one more touchdown from both teams, and 47 seconds left in the half, Occidental attempted a field goal from the 40-yard line. The kick was good, giving the Tigers a three-point advantage going into halftime.

Occidental took the momentum into the second half and worked its way up the field to complete a seven-yard pass on its opening drive of the half.

The Kingsmen were able to take the lead in their next possession, with another passing touchdown from Isham when he found Allen in the endzone for an eight-yard score.

Cal Lutheran started the fourth quarter with the ball, and the duo of Isham and Worthley came through yet again to earn another touchdown for the Kingsmen.

Marquez took the kickoff following the score, and at Occidental’s ten-yard line, sophomore wide receiver Matt Paparella forced a fumble, and the ball was recovered by the Kingsmen.

After a few incomplete passes and an illegal forward pass, Cal Lutheran attempted a field goal from the 25-yard line. However, the Tigers were able to block the kick.

Occidental was able to take advantage of the blocked kick, scoring on their next possession to make the score 42-39 in favor of the Kingsmen.

With just over nine minutes left in the game, Cal Lutheran wanted to secure their victory. Isham and Allen worked together with three complete passes to move the team down the field to the nine-yard line and found him again in the end zone to leave the score 49-39.

The Tigers did not keep possession for very long after that when the ball was intercepted by freshman defensive back Eddie Flores. The big defensive play by Flores sealed the victory for the Kingsmen as they were able to keep the ball for the rest of the game.

“The entire defense played hard. The kids have a tremendous desire to succeed and put out a great effort,” Beattie said.

With the Kingsmen’s goal of wanting to show the teams in the Southern California Intercollegiate Athletic Conference that they are still a team to keep on their radar, this game was a step forward.

“You know, we’re out here just trying to get better every day. Season hasn’t ended up how we wanted it to, but we’re trying to send a message to SCIAC that we’re still here. We have a lot of young players trying to build for the next year and hopefully we can just keep getting better from here,” Allen said.

Cal Lutheran will end their season on Nov. 15 when they take on La Verne at 1 p.m. at William Rolland Stadium.