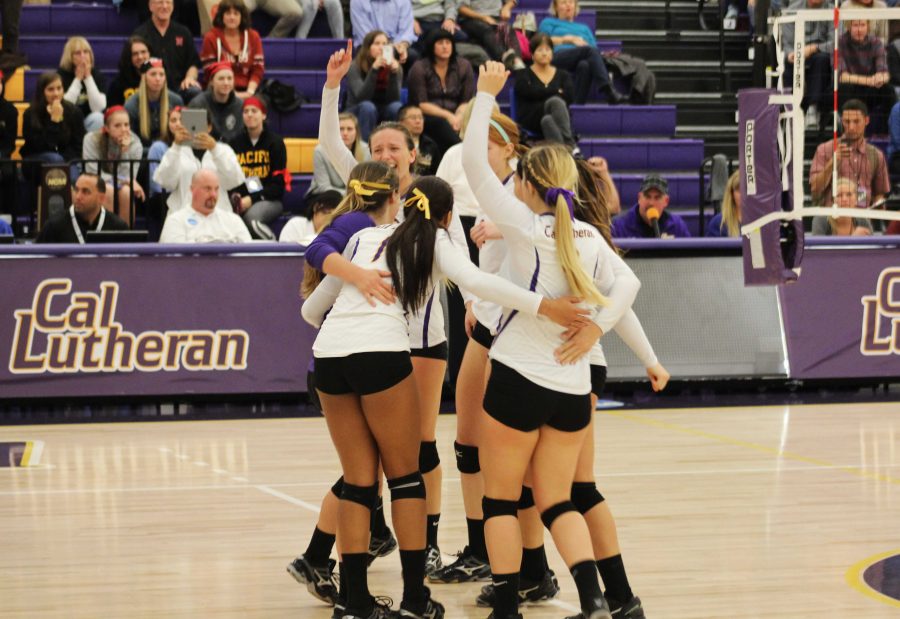 Upset alert: The Regals celebrate after winning a point against Whitworth on Nov. 14. After defeating the Pirates, the Regals were defeated by Trinity University. The Tigers avenged the loss they suffered on their home court in last year’s regional final at the hands of the Regals. Photos by Genesis Rodriguez - Staff Photographer

The Regals were eliminated from the regional volleyball tournament on their home court by Trinity University in four sets. Fellow SCIAC team Claremont-Mudd-Scripps took the regional title and will compete for a national championship in Newport News, Virginia

The California Lutheran University women’s volleyball team hosted the 2014 NCAA Division III Volleyball Championships in the Gilbert Sports and Fitness Arena on Nov. 14-16. There were eight regional hosts with Thousand Oaks being one of them this year.

The Regals entered the tournament ranked third in the nation by the American Volleyball Coaches Association and were the favorite to win with home court advantage.

However they were upset in the semifinal match by Trinity University in four sets. High expectations for the Regals were not met as they missed their opportunity to reach the national title game for the second straight year.

The first Cal Lutheran game took place on Nov. 14 at 8 p.m. against the Whitworth Pirates. With faces painted purple and gold, Cal Lutheran fans were excited for the game.

The entire second set was very close. Junior right side hitter Pua Mo’okini-Oliveira had many consecutive kills during the set.

“It was a really big team effort. We just wanted to come out here and play our game, so that’s what we did,” Mo’okini-Oliveira said.

The Regals continued their reign by winning the second match 25 to 19.

Although Whitworth put up a fight for the last match of the night, Cal Lutheran still took the crown, winning the set 25-14.

Excitement filled the air as Mo’okini-Oliveira and Pappas ended the game with a block.

The Regals did not have much time to celebrate the win as they took on Trinity the day after their Whitworth victory.

“We’re going to take every game one step at a time, so we’re just focused on tomorrow and what we have to do then,” Mo’okini-Oliveira said.

The Regals stepped on the court again on Nov. 15 at 6 p.m. against the Tigers.

The entire first set was very close. The teams went back and forth with the lead but the Tigers ended up taking it 26-24.

Eason led off the second set by getting a kill for Cal Lutheran’s first point. Lawrence and Eason led the Regals offense, collecting 40 total kills. The second set was very close again, but the Tigers won 25-18.

With their backs against the wall, the Regals needed a third set victory to stay alive. A series of service aces allowed the Regals to continue the match and win the set 25-11.

The last match started off with a kill by the Regals and was another close match. Pappas and Mo’okini-Oliveira held it down for blocks and Rohrer had 12 block assists. The Regals fought but the Tigers won the last match 25-21, winning the game and advancing to the Regional Championships.

Although the Regals were sad to see their season over, they still fought till the very end.

“We just wanted it really badly so it’s unfortunate how it went down,” Tetherow said. “Besides losing our seniors unfortunately, we’ll take away the memories and laughs that we made together as a team and the sister bonds that we created with one another. We’ll definitely remember this and it’ll be on next year.”

Roesel said even though it hurts to lose, it’s the chance you take when you play a sport.

Although the team is losing four seniors, the Regals will come back next season with a fresh start.

“I think they’ll come back to work hard and devote themselves to the offseason and the weightlifting like we do every year,” Roesel said.