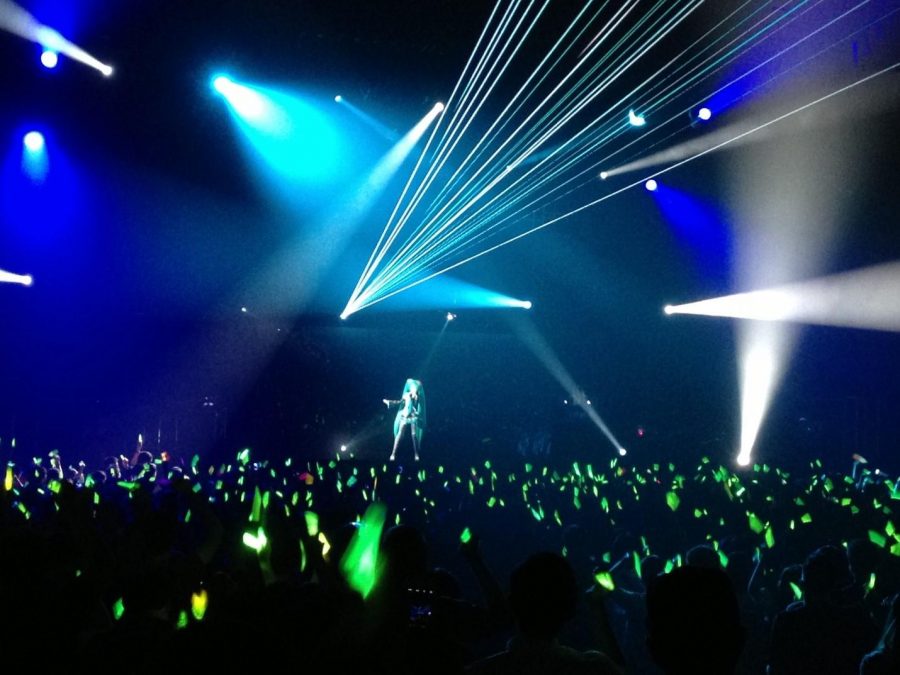 Miku Hatsune on stage with fans waving their glow sticks

“You’ve Got Mail” appears on the side screens of the Nokia Theater performance hall. With one click on the digital mailing envelop emerges from the darkness of the immense stage the shape of very long turquoise pigtails and the hologram of Hatsune Miku. The audience jumps from their seat with thrills of joy and the live band on stage strikes the first cord of a two hour cutting-edge multimedia show that took place October 11 and 12 in Los Angeles.

Hatsune Miku is a Japanese cyber-celebrity who was born in Japan in August 2007 in the form of a singing voice that streamed out from a vocal synthesizer application, Vocaloid 2 and Vocaloid 3, developed by Crypton Future Media. This software was a response to the music industry asking for a computer tool to digitally compose vocal parts. The software chopped into single phonic samples the human voice of actress Saki Fujita and strung pieces together to create new lyrics and melodies that could be played with an instrument resembling a keyboard. The music industry was entering a new world, similar to the metamorphosis of digital graphic world where Adobe Photoshop had made it possible to manage the pixel for superior graphics. Music was also becoming pixelated.

The immense success of the release of Hatsune Miku first songs, the “Character Vocal Series” encouraged Crypton to give an image to the voice, a challenge presented to Kei Garou, Japanese illustrator, who drew out of his imagination a petit blue-eyed 16 year old character with boundless energy. The world fell in love with this long pig-tailed character.

The concert of last weekend was a rare appearance of Hatsune Miku in the United States and the performance took the audience to new levels of amazement with its novel technology. A new vocaloid synthesizer allowed Miku to speak and sing in English. She sang with one of the twins Rin and Len Kagamine in a duo that demonstrated how well the keyboard synthesizer can mix two voices simultaneously. Luka Megurine, a stunning adult size virtual figure, seemed very real with a three-dimensional rendition that involved multiple projectors shining onto the Dilad screen, an immense semi-transparent surface that scatters the light to give depth to the image. The audience reached its highest cheers when two new characters never seen in concerts Meiko and Kaito were introduced by Miku as the surprise of the concert. Their voices were known but their holographic characters had never been seen on stage in the United States. Laser light synchronized to the music framed the stage with combs of beams sweeping the space of the auditorium or shooting bundles of colorful spikes to the sky.

The show made possible what would never be achievable with real performers. Miku changed outfits in a split of a second. She appeared and disappeared on the spot. She could take the form of a shadow or an outline. She threw rose petals in the air out of nowhere. The concert was a historical moment for Los Angeles. A display of technical prowess.

The Hatsune Miku effect expands beyond a concert or a series of songs. A large global community of music and graphic creators generate fan art inspired from her character. The songs performed in concert compile elements composed by fans. These virtual characters express the thoughts and the feelings of a global community.

The visit of Hatsune Miku in Los Angeles was organized like a festival, the Hatsune Miku Expo, with several events honoring the fans that fuel the creativity surrounding the world of Miku. The message was clear. Hatsune Miku, a virtual creation, connects many in the material world, and gives a reason to compare knowledge to invent and cross the boundaries of the technically impossible, while giving amateur or professional lyrist and musicians a platform to share their voice.

Miku’s last song summed up the intent well. Tell Your World is an open invitation to continue to share with others through her platform.