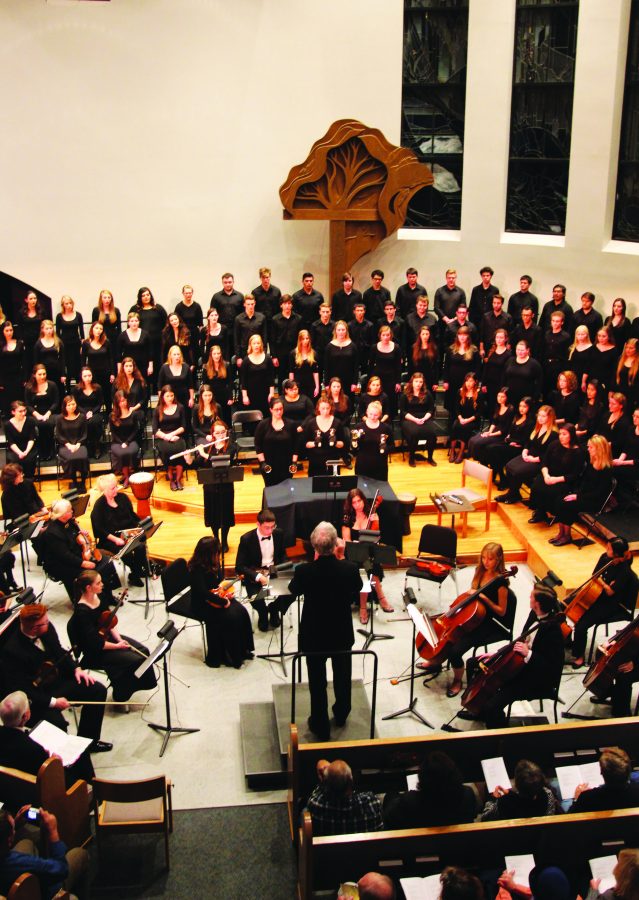 With the excitement of the holiday season beginning to spread around campus, the California Lutheran University orchestra and choirs came together for the weekend to perform the annual Christmas Festival Concerts to set their audiences in the mood for the Christmas season.

This three-day concert is the longest running annual event at Cal Lutheran, playing every year the college has been in existence. According to the conductor of the university symphony, Professor Daniel Geeting, the songs change every year but the format is always the same.

“People get used to showing up on the first weekend of December and we are doing a show that they are pretty familiar with. It involves a lot of people,” Geeting said.

It is a popular concert every year and the Samuelson Chapel was packed every night this year, even a half hour before it began.

The orchestra took their seats before the choir entered and the night began with an organ prelude of two pieces performed by the university organist Kyle Johnson.

Following the organ prelude, the orchestra played a concerto accompanied by the piano.

This song featured both the sounds of the strings of the orchestra and the keys of the piano and prepared the audience for the entrance of the choir.

After the applause, the choir entered and positioned itself around the audience in a circular formation and performed “O Magnum Mysterium” a cappella. This allowed the listeners to get the full experience of the voices and harmonies of the students as director Wyant Morton conducted the Latin piece from the middle of the chapel.

For the next song, audience participation was required. The crowd stood and sang with the choir with the accompaniment of the orchestra to “O Come, All Ye Faithful.” The various voices came together and filled the chapel, letting the audience play a part in the performance.

“I thought the group’s performance was extremely strong, everything dynamically to intonation was amazing and the group followed very well. Both the choir and the orchestra were very well intertwined,” Cal Lutheran graduate and cello player Derek Andrzejewski said.

After the song, the audience took their seats and then another a cappella carol was sung by two rows of the choir.

Three handbell players were used in the next song called “The Angels and the Shepherds” along with the remaining members of the choir, as well as an appearance of freshman flutist Cassidy Helikson.

Songs such as “Blessed is the Lord,” “Cuncti Simus” and “Angels from the Realms of Glory,” were also performed.   Senior concertmaster Antonio Foreman had standout solos in each performance.

“For this concert we wanted the audience to feel the cheer and happiness of Christmas and the holidays and leave feeling that for the rest of the month,” Foreman said.

The mood of the night was changed as the Kingsmen and Regals Quartet took the spotlight and sang familiar carols.

The Kingsmen Quartet’s performance of “Sleigh Ride” was especially different as it included their own percussion of whistling, clapping and stomping. With choreographed dance moves and laughs from the crowd, the quartets provided a change of pace for the night.

“The feel, especially in men’s barbershop, is to put on a really good show and to make it really funny and entertaining. Going into it we wanted to pick something that was still going to be with the theme, and depending on the song or the feel and the people that are in it will determine how much we want to stick with a traditional barbershop song or go a little bit more modern,” senior quartet member Matthew Case said.

Another memorable moment of the night was the carol “Noel” in Kituba dialect. With the use of a hand drum, shaker and cowbell, the choir moved in unison to the beat.

“It’s a Christian hymn but it sounded to me like West African. I think it fits into the sort of diversity motif but it’s still very much related to the Christmas season,” Geeting said.

The concert ended with audience participation once again as everyone came together to sing “Hark, the Herald Angels Sing.”