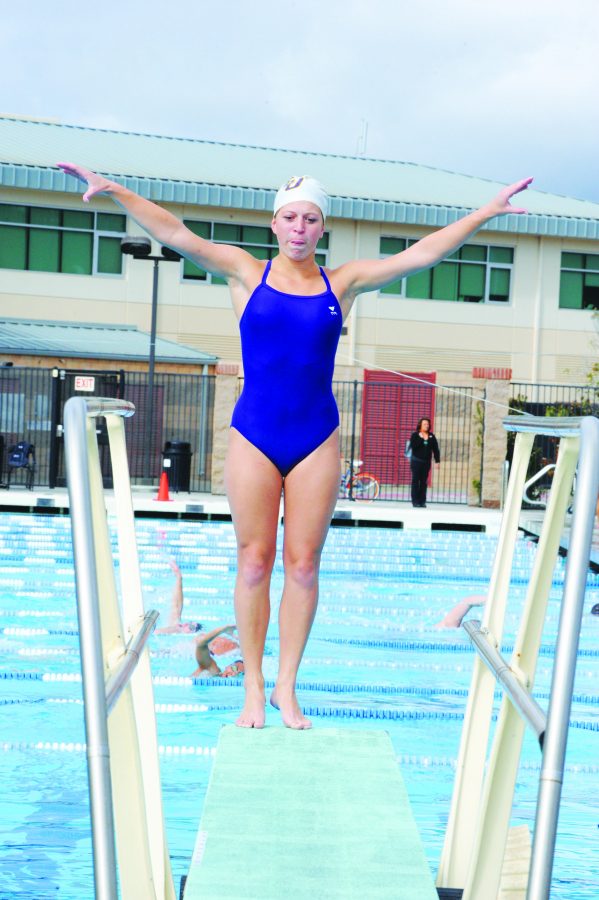 Kingsmen and Regals Swim and Dive

The Kingsmen were able to edge the Leopards in their home pool with a final score of 152-129. The Kingsmen won 10 out of 16 events and five different Kingsmen came in first place, with three of the five winning multiple events.

“It was a combined effort from everyone to get the win. We met on the bus before the meet and verbalized our plan to get a win,” said Kevin Lane, assistant head coach for the Kingsmen and Regals swimming and diving teams.

“Big points and tough races were swam by Ore Wahnishe,” Lane said. “Ore slipped off the blocks at the start of the 100 free. He started in dead last but he recovered in time to get the win.”

Prior to the game, head coach Tom Dodd made a few roster changes in order to come out with a win for the men’s team, where freshman Zach Zamecki, senior transfer Jonathan Hall, and freshman Jonah Hobbs made their debuts and contributed in a huge way.

“Coach Tom’s lineup choices helped us win a lot more points which helped us with the win,” said junior Philip Anderson, who competed in the backstroke/sprints.

“We came into the meet knowing they would beat us in the breast stroke, so we knew we had to get the wins in the long distance events and other stroke events,” Anderson said.

Other notable victories came from divers Ryan Brem and Hobbs. Brem came in first on the three-meter board with a score of 255.60 and Hobbs who won the 500 free with a time of 5:01.52.

Returning all-SCIAC swimmer Zach Loza also contributed to the Kingsmen success. He placed second behind teammate Hobbs in the 500 free with a time of 5:16.13, and placed third in the 200 free (1:50.93). He too was also a member of the 200 free relay.

The Regals participated in the meet alongside the Kingsmen at La Verne. Although the Regals showed some good things in their SCIAC opener, it was not good enough as they fell to the Leopards 222-50. The Regals had to compete without a few of their teammates due to sickness, which was a key factor to their loss.

“Not having the entire team there was definitely hard but once everyone is back and healthy we should be better,” Katie Kochalko said, junior swimmer for the Regals who competes in the individual medley and fly.

Sophomore diver Tianna Pasko dominated the diving boards as she swept the one meter with a score of 216.00 and a score of 170.35 in the three meter competition.

Taylor Faust, who is the only senior for the Regals put on an excellent performance as she won the 50 free (24.55) and placed second in the 100 free (59.90). Faust was also a part of the second place finish in the 200 relay along with Rachel DeFilippis, Kochalko, and Rachel Balcom with a time of 1:50.20.

Junior captain Kolchalko is also coming off a season ending injury dating back to last season and she was looking to dust off some of that rustiness in her events. She delivered two strong performances, where she placed second in the 100 breaststroke (1:16.83) and third in the 100 fly (1:04.47).

“It felt really good to finally get back at it and compete. Although it’s been a slow start I have been training hard in hopes of getting my times back down to where they were before I was injured,” Kolchalko said.

The Kingsmen (1-0 SCIAC) and Regals (0-1 SCIAC) will have a little over 4 weeks to prepare for the Second Annual Chris Knorr Invitational at Samuelson Aquatics Center Jan. 3-4.

“CLU finished this part of the year on a high note. Smiles all around. The results show and give a boost to the strong swimming and effort in the pool and weight room,” Lane said. “We are headed into our winter training camp. This is high volume training. When school starts for the spring 2015 semester, we will be taped from the high volume and start racing even faster.”