‘Whiplash’ Makes a Name for Itself 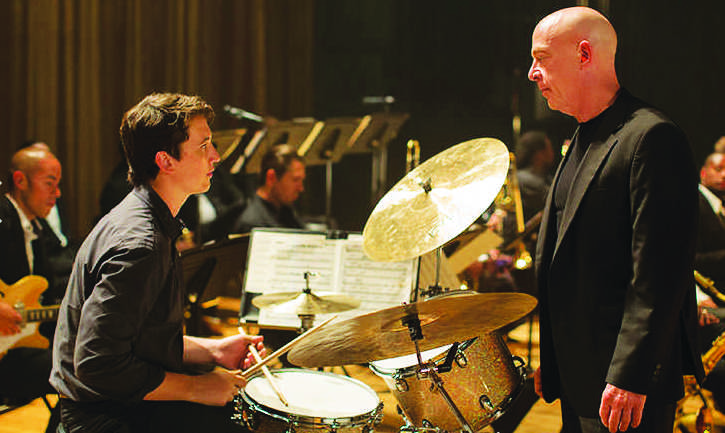 I can think of only one reason why “Whiplash” is one of eight films to be nominated for best picture at this year’s Academy Awards: it’s the perfect movie.  Everything from the pacing, the acting, the length, the plot and especially the sweet sounding jazz throughout were all simply perfect.

Damien Chazelle’s (writer/director) “Whiplash” centers on an ambitiously driven jazz drummer (Miles Teller) who attends the top music school in the country. When he’s invited into the school’s core band, he vigorously attempts to impress the school’s most intense instructor, Fletcher (J.K. Simmons).  Andrew (Teller) soon witnesses Fletcher’s spine chilling and unnerving method of teaching. J.K. Simmons’ performance makes you realize how fiery the world of music can be at these high levels.

At first glance, a film like “Whiplash” usually isn’t popular in our country where movies are often filled with big explosions and effects.  The reason this movie has done so well, though, is its sole ability to make you feel like you’re watching a thriller – without using weapons or bloodthirsty villains, either. A movie about jazz music makes your hair rise like in a monster film? Yes, oh yes – this one sure does.

Another element this film touches light on is the dedication these musicians contain. There are a multitude of scenes where Andrew is by himself, drumming his night away. He drums for so long that he begins keeping a stack of Band-Aids and a pitcher of ice water right next to him so he can wash his bloody hands and tape them right up to keep going. Anyone who has an intense dedication to anything important to him or her could easily relate to this film’s protagonist.

The cinematography was not only striking, but also pinnacle in the storytelling process.  Perfectly executed rack focus shots help convey Andrew’s blood, sweat and tears on the cymbal as it focuses on the drum set and then back to his face.  Another magnificent shot includes the camera rapidly turning from the band playing to Fletcher instructing, then back again three to four times in a row. It’s seamless in its appearance, but God only knows how many attempts it took to perfect it.

“Whiplash” is titled after one of the main songs Andrew learns over the course of his time in the band.

Early on, Andrew witnesses firsthand the treatment that Fletcher imparts on his band.  In that music room, Fletcher owns all authority and power – and he does not hold back. Freely calling some of his students derogative and offensive nicknames, Fletcher clearly has no boundaries in his attempt to push each student to their fullest potential.

Originally a short film, “Whiplash” caught notice when it was playing at the Sundance Film Festival back in 2013. According to Variety.com, Jason Reitman’s (“Juno”, “Up in the Air”) producing partner first noticed the script, thus eventually bringing in Reitman to help produce it. From there, the film took off – and so did Damien Chazelle’s career.

Not only will Chazelle’s career take off, but also Miles Teller will be right there with him on the success train. Teller delivers an emotional performance that will only boost his credit in Hollywood.  Together with J.K. Simmons, they bring a duo of characters to life on screen that only build off each other.

If you haven’t been able to check out “Whiplash” yet, go find someone with a screener DVD of it before the Oscars in a few weeks. It’s slowly leaving theaters, but not without making a name for itself first. Although it may not win the award for best picture, it undoubtedly deserves its nomination nonetheless.  J.K. Simmons should take home the award for best supporting actor, too, but lets not make too many predictions just yet.

Finally, “Whiplash” presents one of the best endings to a film I have honestly ever seen – ever.  That alone should be a good enough reason to go see it.