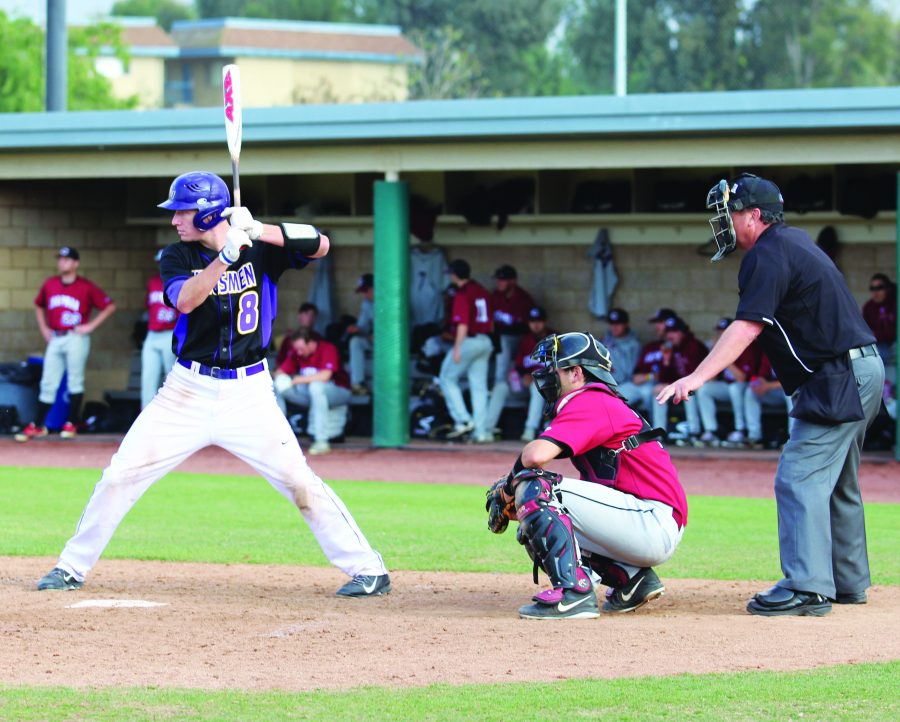 The California Lutheran University baseball team opened the Southern California Intercollegiate Athletic Conference season the weekend of Feb. 20, facing off against Chapman three times, ending the weekend with two victories and one defeat at the hands of the Panthers.

Starting Friday afternoon the Kingsmen went on the road to face the Panthers, coming up with a 5-0 victory.  The teams faced off twice on Saturday with the Kingsmen inching out a 4-2 victory in the first matchup, but the Panthers came away with the win in the final game of the weekend by a score of 9-4.

“Anytime we take two from a team over the weekend it’s a good thing,” senior pitcher Scott Peters said.

Peters led the Kingsmen on Friday pitching a complete game and getting his second win in as many starts. He struck out six Panthers’ batters in the process while allowing just two hits over nine innings.

The Kingsmen win did not rest solely on the shoulders of Peters, as the Kingsmen bats were hot on Friday afternoon as well. As a team they registered 10 hits and were led by sophomore shortstop Austin Kay who had three hits and two runs batted in. Junior right fielder Ramsey Abushahla also contributed two hits and scored three runs while senior second baseman Max Price hit his first home run as a member of the Cal Lutheran baseball team, knocking a solo home run over the left field fence in the top of the third inning.

The Kingsmen made numerous defensive plays to ensure the shutout and the victory including a double play in the eighth inning securing a 5-0 victory.

“We knew how important it was to get the conference season started right, so everyone came out with the right mindset and people were making plays all over the field and at the plate,” sophomore outfielder Nathaniel Thompson said.

The Panthers traveled to Thousand Oaks on Feb. 21 for a doubleheader and during the first game the Kingsmen were able to carry their momentum from Friday onto the diamond.

In the early innings of the first game Abushahla, Gabe Gunter and Davey Casciola were able to get the Kingsmen going early batting in runs to go up 3-0. In the fifth inning Casciola would hit a double to drive in Gunter to put Cal Lutheran up 4-0.

Sophomore Trey Saito pitched seven innings and allowed just one earned run earning his second win of the season. Junior Landry Kiyabu came in for the final two innings to earn the save and secure a Kingsmen victory.

In the second game of the afternoon junior transfer Evan Peterson got the starting nod on the mound for his debut in a Kingsmen uniform. During the second inning the Panthers’ bats began to get hot and they were able to capitalize on some errors the Kingsmen made in the field to go up by a score of 3-0.

The Panthers were up 4-0 in the third until a Spencer Dubois triple brought in Austin Kay and Justin Cana hit a sacrifice fly out  which scored Dubois from third to cut the lead in half.

Peterson was replaced on the mound after giving up a walk at the top of the fourth by sophomore Marshall Pautsch and the Panthers were able to get hot again at the plate. Chapman was able to get four runs off four hits in the inning extending their lead to six runs.

Cal Lutheran was able to hold Chapman to one more run for the rest of the game and they drove in two of their own, bringing the final score to 9-4 in favor of the Panthers, resulting in the first loss of the young season for the Kingsmen.

Overall the Kingsmen won the weekend series and felt good with how they performed in their first conference matchups.

“To start our SCIAC schedule with wins and a good team performance is a positive and we can build from that,” Peters said. “We also learned a little about ourselves this weekend, and we have a better sense of what we need to do going forward.”

The Kingsmen will trot out onto the diamond once again on Feb. 27 when the Caltech Beavers travel to Ullman Stadium for another SCIAC conference matchup at 2:30 p.m.