In a SeaWorld of Hurt 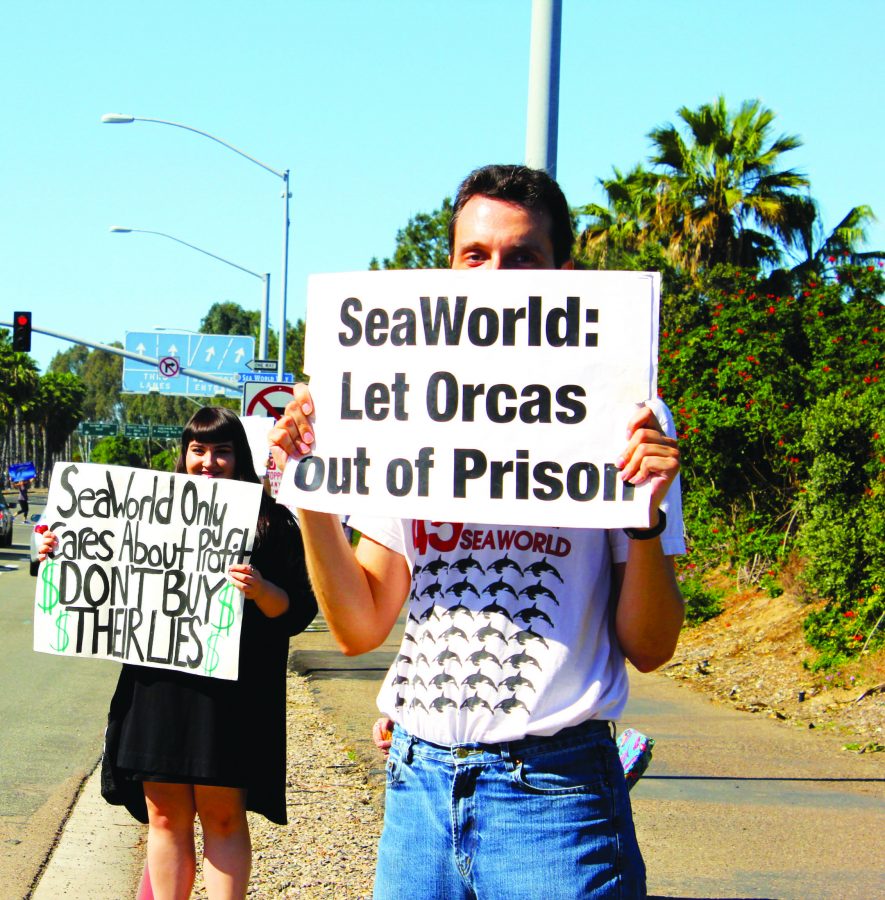 For many it’s easy to yawn over issues of animal cruelty. Most people rarely grapple with the morality of how their food is slaughtered or how leather is made. And really, most of us would prefer to keep a distance.

But it’s important to slow down and just sit with an issue. People for the Ethical Treatment of Animals is an organization that would have us do that.

On Feb. 15, volunteers protested near SeaWorld in San Diego to highlight one of PETA’s biggest causes, the captivity of orcas and other sea animals.

Ellen Ericksen, an independent animal activist based in San Diego, organized the protest to coincide with Valentine’s Day and President’s Day. She said she organizes protests for every holiday weekend, when SeaWorld is most busy.

“People have to drive by us to go into SeaWorld, so we stand out there with signs, we have people dressed up as orcas,” Ericksen said.

Protestors at events like this are trying to draw attention to the unsuitable living conditions for sea animals at SeaWorld. It isn’t so much that orcas and dolphins are outright abused, but the life they live in tanks is pitiful compared to their natural habitat.

“Orcas and other animals suffer when we force them to live in the human equivalent of bathtubs,” said Katie Arth, a campaigner with PETA. “A place like SeaWorld denies them everything natural and important to them.”

Arth said wild orcas swim up to 100 miles per day, but an orca in captivity would have to circle its tank roughly 1,900 times to swim the same distance. Animal activists said orcas become bored, anxious creatures and exhibit strange behaviors in man-made habitats.

“They end up suffering broken teeth and chronic pain because they snap and gnaw at the pool gates, which is a result of stress and aggression,” Arth said.

The 2013 documentary film “Blackfish” focuses on the mental state of one orca named Tilikum, who killed his trainer Dawn Brancheau in 2010 and was involved in the death of two other people years prior. By contrast, the film asserts that orcas have never killed humans in the wild.

Alexa Brunansky is a junior at Cal Lutheran and member of the American Pre-Veterinary Medical Association club on campus. On her last visit to SeaWorld, she said she recalled seeing what looked like a bored whale.

“When I went there I saw this orca, just swimming upside down in a circle for just 30 minutes,” Brunansky said. “It was terrible.”

In the wild, orcas live in close-knit families, often never leaving their mothers. Places like SeaWorld, Arth said, cause emotional suffering when they split orca calves from their mothers.

“SeaWorld’s trainers have reported their mothers are on the side of the pool for days, crying out, missing their children,” Arth said.

There is a wealth of information about the suffering of orcas in captivity, but what’s the solution?

SeaWorld has proposed enlarging the orcas’ exhibits in what it calls the “Blue World Project.” However animal rights activists stand by the motto, “a bigger prison is still a prison.”

For many, the only acceptable solution is release into ocean waters. But it isn’t as simple as it sounds when many of the orcas have lived their entire lives in captivity.

“They don’t even know how to feed themselves because they get restaurant-quality food,” Ericksen said.

The happy medium is a hybrid called a “sea pen” or “seaside sanctuary.” It involves transporting the mammals to ocean coves sealed by fish nets, where they can experience a natural habitat and still be monitored and cared for.

“The next step from that, in order to transition these animals, would be to teach them how to hunt, how to eat live fish,” Arth said.

She said sea pens could be established for less than $50,000, compared to the millions SeaWorld plans to spend on its expansion project. Already, detailed plans exist for the transport and rehabilitation of orcas in sea pens.

Ericksen, though she protests SeaWorld, doesn’t see a need for the organization to shut down, but rather to adapt to a sea pen model.

“I think it’s very marketable,” Ericksen said. “In fact, their image is so tarnished now from the movie Blackfish and from our protests, I think it’s a great business model for them. Turn it into a truly educational park.”

Ericksen particularly takes issue with animals being used to perform. I imagine for some, who may have cherished memories of SeaWorld’s aquatic animal shows, this is a big change.

Would a SeaWorld without orcas and dolphins shows lose its allure? My answer is no.

I think sea mammals can be just as interesting in their natural habitat. And one day, though audiences may no longer get to see them fly through the air in tandem, they’ll hopefully never have to worry that these sophisticated animals are unhappy.

Arth, Ericksen and Brunansky agree that the first and easiest thing anyone can do is talk about it.

“I think just getting people to know is the biggest battle,” Brunansky said.