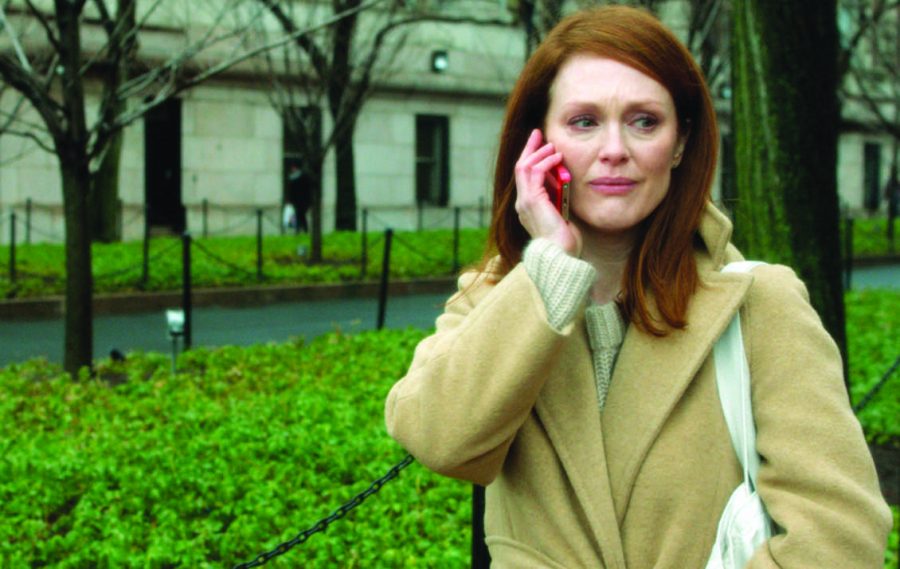 It’s important to hold on to those who mean the most to us throughout our lives. “Still Alice” shows an excellent example of the bravery and strength a family can have when one of their loved ones is diagnosed with a severe disease.

Adapted from the novel of the same name by Lisa Genova, “Still Alice” is a heartfelt, dramatic story of a 50-year-old linguistics professor who is diagnosed with early onset Alzheimer’s disease. Julianne Moore, who recently won the Best Actress Oscar for this role, depicts a striking performance that allows you to feel what her character feels throughout.

Dr. Alice Howland’s success as a linguistics professor at Columbia University has made a name for herself. On top of a lustrous career, she has managed to raise three children who are all grown up and out of the house. She is happily married to her husband, John Howland (Alec Baldwin), a fellow professor at the school.

In the opening image, we see Alice’s first memory decline as she celebrates her 50th birthday with her loving family. We also attain a glimpse of the family dynamic between the siblings– a tense, yet loving vibe as subtle passive aggressive comments are made about each other at the table. Anna (Kate Bosworth), the oldest daughter, quickly makes a remark about Tom’s (Hunter Parish) gift he got for their mom. She also cynically asks where their youngest sister, Lydia (Kristen Stewart), is since she doesn’t show up.

Right after, Anna’s husband makes a comment about what Lydia and Anna’s relationship growing up must have been like. When Alice hears this, she immediately responds, “my sister and I were very close actually.” Everyone is shocked at how random of a statement Alice makes, but they play it off like nothing happened. This is the beginning of the downfall of Alice’s memory, and the opening scene does an excellent job of introducing a snapshot of the main character’s future struggle along with establishing a tough family dynamic that will have to be worked out.

This is exactly what this film is about: trying to stay connected to a loved one who is physically right in front of you but mentally miles away. As Alice begins to decline further, she starts seeing a neurologist who is just as surprised as she is when he discovers her rare diagnosis. She attempts to keep this a secret as long as she can until she can’t handle it anymore. One night when she can’t beat insomnia, Alice wakes her husband in the middle of the night to break the news to him.

When it comes to telling her family, things aren’t as easy. Along with receiving information on the diagnosis, her doctor also informs her the disease is genetic and could possibly have been passed on to her children. This is the first trial the family goes through that tests their strength.

Apart from Moore’s phenomenal performance, the other aspects of the film aren’t of the same caliber. Baldwin, Bosworth, Parish and even Stewart all do well with their roles, but at times it felt like the film was originally meant for television, which could just be the script’s fault. Stewart had her typical awkward line deliveries, but to be honest this performance wasn’t completely terrible as she shows signs of growth in her acting during the film.

One of the more artistic scenes I enjoyed was when Alice is taking her usual run through Columbia’s campus. At one point, she stops and looks around since she doesn’t seem to remember where she is temporarily. The cinematography is very well done as the camera slowly blurs Alice’s background around her while leaving her in main focus. This shot helps represent the fogginess surrounding her and her memory, along with the fear and anxiety a moment like this could bring.

“Still Alice” isn’t your usual happy-go-lucky type of film. It brings tender emotions to the surface as you watch the slow decline of the once successful linguistics teacher who worked her whole life to get where she was, only to see it be stripped away without warning. Alice’s heart and character show that persevering through hardships can still leave you connected to who you really are no matter what.